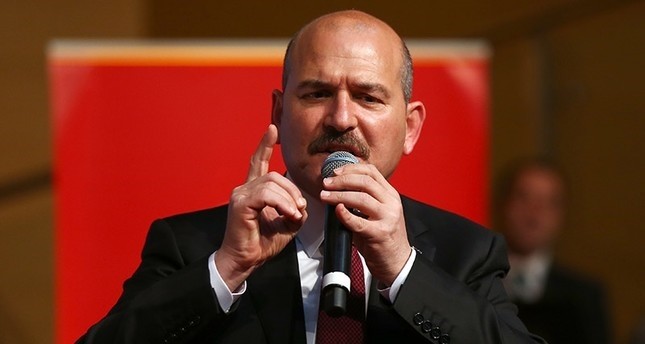 With Turkey engaged in a fight against various terrorist groups simultaneously, Interior Minister Süleyman Soylu has said that Ankara is resolute in its fight against terrorism, which targets the peaceful environment of the country, and that the significant decrease in the number of terrorists in the country is a result of these operations.

Speaking at Parliament's Planning and Budget Commission meeting on Nov. 15, Soylu stressed Ankara's efforts to eliminate terrorist groups from Turkey, including Daesh, the Gülenist Terror Group (FETÖ) and the PKK. Soylu said last year 31,715 terrorists from the PKK, Daesh and FETÖ were arrested in 72,795 counter-terrorism operations.

He said that the number of the terrorists in the country has dropped 28 percent, marking the lowest number in past five years, and that 3,069 terrorists have been "neutralized."

Commenting on the PKK existence in northern Iraq's Qandil Mountains, Soylu said its camps should be destroyed, as the PKK uses the region as its headquarters.

"Every terrorist camp within 25 kilometers of the range beyond the border will be blown away," Soylu asserted, whereas signaling a sizeable cross-border operation to PKK headquarters in Qandil and Sinjar, which lie some 80 and 100 kilometers away from Turkey's borders.

As the outlawed PKK has been losing its influence in Turkey as a result of ongoing Turkish Armed Forces (TSK) operations, it has been targeting children in the region in an effort to increase pressure. The PKK has been setting up traps with improvised explosives around places where children usually play.

In the last two years, 25 children have lost their lives because of PKK traps. In line with Ankara's accelerated efforts to prevent terrorists from targeting innocent civilians, 4,801 PKK terrorists were arrested in operations over the past year.

The government also aims to repair the regions that were damaged in operations targeting terrorists. Soylu said that there were 432,503 applications for damage caused by terrorism and 403,904 of them have been finalized. The government has paid out over TL 4 billion ($1.03 billion) to those affected by terrorism.

Soylu said 53,781 people from 146 countries are not allowed to enter the country, 5,540 people have been deported and 32 Daesh terrorist attacks have been prevented in the last two years, 10 of which were prevented in 2017. He added that terrorists in prisons from both the PKK and Daesh have been interviewed to find out their motivations for conducting acts of terrorism and they will take precautions in line with that.

Soylu mentioned that his family is being threatened by Revolutionary People's Liberation Party-Front (DHKP-C).

"DHKP-C militants planning to attack my daughter have been apprehended many times by our security forces," Soylu added.