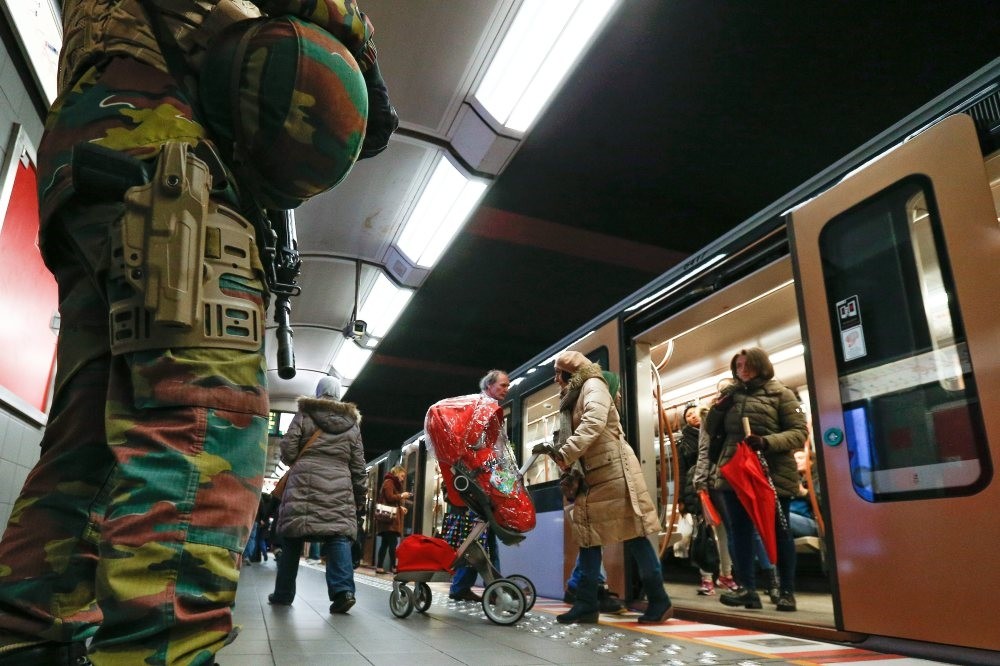 Belgian soldiers observes the platform of a metro station in Brussels. Experts suggest Daesh militants freed by the YPG and U.S. could pose a grave threat to countries that the militants return to.
by daily sabah
Nov 16, 2017 12:00 am

Turkish officials have continued lambasting U.S. officials for underestimating the secret deal between the YPG and Daesh that allowed the evacuation of Daesh militants, including some top figures, calling it a ‘local problem,' and a security expert told Daily Sabah the militants likely pose a long-term risk by establishing sleeper cells in Europe

The hazardous deal between the PKK's Syrian affiliate Democratic Union Party's (PYD) People's Protection Units (YPG) militia and Daesh that permitted the evacuation of Daesh terrorists from Raqqa could pose a great danger to Turkey and Europe. The Foreign Ministry railed at a U.S. coalition spokesman who called the secret deal between the YPG and Daesh to evacuate terrorists from Raqqa under surveillance of U.S. troops on Oct. 12, a "local problem." "It is an extremely grave and eye-opening revelation that the so-called Syrian Democratic Forces [SDF] dominated by the YPG brokered a deal with the Daesh terrorist organization to evacuate a large number of terrorists from Raqqa while the operation to clear Daesh from Raqqa was already underway," the statement read.

A BBC report revealed details of the agreement between the SDF, which is predominantly composed of YPG fighters, and Daesh to arrange the evacuation of thousands of militants, including some of the most notorious, and their families from Raqqa, with 10 trucks loaded with weapons and ammunition on Oct. 12. The report contains secret footage, interviews with drivers who transported the militants and some Syrians, including a shopkeeper and a smuggler who spoke on condition of anonymity.

"Each of those freed militants substantially has potential to carry out massive attacks in Europe," Mete Yarar told Daily Sabah. Yarar is an expert on security policy and a former member of Turkish Armed Forces (TSK).

The Foreign Ministry said Turkey "deplores" the U.S.-led coalition and U.S. Defense Department's statements that expressed respect for the deal and called it a local problem.

After the extent of the deal was revealed, the spokesman for Operation Inherent Resolve (OIR), the U.S.-led coalition against Daesh, Col. Ryan Dillon, said on Twitter that the U.S. tolerated the agreement. "This was a local solution to a local issue. Coalition did not fully agree, but respected our partners decision," he said on Twitter.

Defense Department spokesman on Iraq and Syria Eric Pahon on Monday told Anadolu Agency (AA) that the agreement between the SDF and Daesh is a "local solution to a local problem," and that the SDF signed the agreement in a period when the U.S.-led coalition against Daesh had difficulty carrying out airstrikes due to the number of civilians in the area.

An SDF spokesman said in October that a group of Syrian Daesh fighters "without foreign militants" had evacuated Raqqa overnight, taking civilians with them as human shields.

However, the BBC reported that the militants leaving Raqqa included foreigners from France, Egypt, Azerbaijan, Turkey, Pakistan, Yemen, China, Tunisia and other countries.

Yarar said that Turkish security forces have been alert for a long time and successfully prevented many Daesh militant attempts from entering the country. He added that success in the past month in the operation against Daesh in Turkey was the result of tip-offs regarding possible Daesh infiltration into Turkey from Syria with the help of human smugglers.

"However, we know the fact that the people who previously had carried out attacks in Europe did not come from Daesh-held areas, but were sympathizers living in EU countries who received orders from top figures in Daesh-held areas. If European-origin people find a way through to their home countries, they can possibly establish sleeper cells and wait for the right time to act, which means a long-time security problem for Europe."

Speaking on the issue Wednesday, Prime Minister Binali Yıldırım slammed the U.S., saying the evacuated Daesh members could be a cause of future attacks around the world, and Ankara had on numerous occasions warned Washington to not collaborate with a terrorist group against another. "YPG terrorists allowed Daesh to leave Raqqa with their weapons instead of eliminating them from the city. One terrorist group left Raqqa and another settled in. Is this your rational policy?" Yıldırım said during a parliamentary group meeting of the Justice and Development Party (AK Party) in Ankara.

On Oct. 14, the coalition released a statement, which indicated nothing about evacuated foreign fighters and Daesh leaders, but "rescuing trapped civilians."

"A convoy of vehicles is staged to depart Raqqah Oct. 14 under an arrangement brokered by the Raqqa Civil Council and local Arab tribal elders on Oct. 12. The arrangement is designed to minimize civilian casualties and purportedly excludes foreign Daesh terrorists as people trapped in the city continue to flee the impending fall of Daesh's so-called capital," the statement said. *CONTRIBUTED BY MUSTAFA KIRIKÇIOĞLU