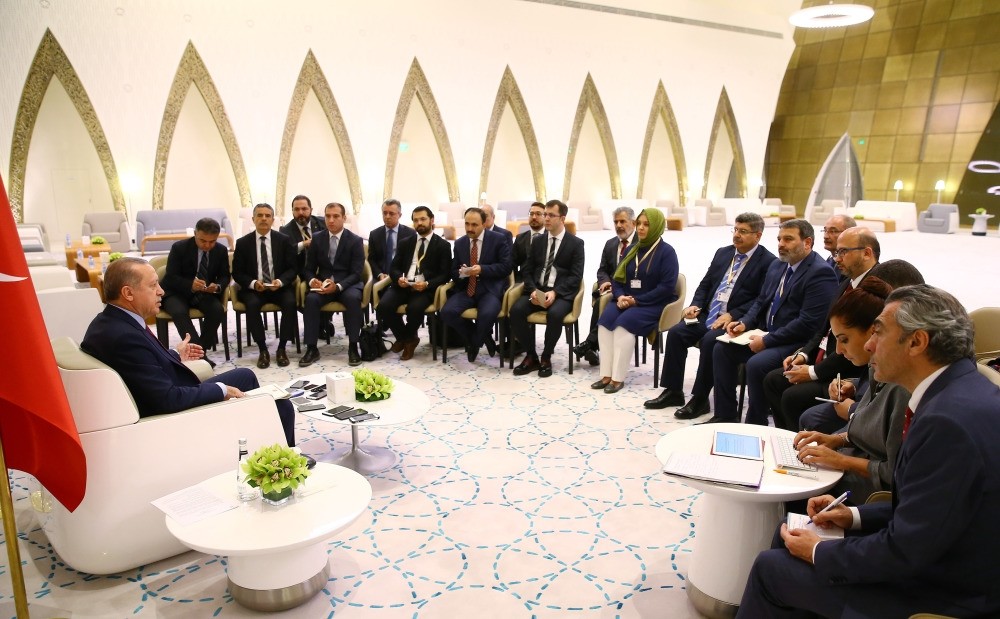 President Erdou011fan (L) said U.S. forces have been involved in the fight against Daesh on the ground alongside YPG forces in Raqqa.
by Serdar Karagöz
Nov 17, 2017 12:00 am

The U.S. denying involvement in the recent developments in Raqqa, Syria, is not convincing given its intense military involvement and the realities on the grounds, President Erdoğan has said

President Recep Tayyip Erdoğan, speaking to journalists in Doha, Qatar at the conclusion of his official visit to Russia, Kuwait and Qatar, said the justifications presented by the U.S. in relation to its lack of involvement in the recently exposed deal between the Syrian Democratic Forces (SDF), led by the PKK terrorist group's Syria affiliate, the Democratic Union Party (PYD), and Daesh terrorists in Raqqa, are not convincing as the U.S. has been heavily involved in the developments in Syria, particularly through immense arms support to the PYD. "I am not sure how familiar the U.S. coalition spokesperson is with the development. It seems like a statement made in routine military logic, as the politics of the issue are different," President Erdoğan said, referring to the statments made by Col. Ryan Dillon, the spokesman for Operation Inherent Resolve (OIR), the U.S.-led coalition against Daesh, saying that the U.S. tolerated the agreement and that it was a "local solution to a local issue. The coalition did not fully agree, but respected our partner's decision."

A BBC report revealed details of the agreement between the People's Protection Units, the PYD's armed wing, and Daesh to arrange the evacuation of thousands of militants, including some of the most notorious, and their families from Raqqa, with 10 trucks loaded with weapons and ammunition on Oct. 12. The report contains secret footage, interviews with drivers who transported the militants and some Syrians, including a shopkeeper and a smuggler who spoke on condition of anonymity.

"The important thing is what the politician, who appointed these people there, says. I do not think he is aware of the number of Daesh members there or how many of them have escaped. Raqqa was the main center of Daesh in Syria, and finally their stronghold has also fallen. We had called on U.S. authorities for a joint operation against Daesh in Raqqa and Manbij, however, we were not able to convince them. The U.S. instead chose to fight with one terror group against another terrorist group," the president said.

An SDF spokesman said in October that a group of Syrian Daesh fighters "without foreign militants" had evacuated Raqqa overnight, taking civilians with them as human shields. However, the BBC reported that the militants leaving Raqqa included foreigners from France, Egypt, Azerbaijan, Turkey, Pakistan, Yemen, China, Tunisia and other countries.

Erdoğan highlighted that the comments by the U.S. officials denying the involvement in the recent events does not match the realities on the ground.

"They [U.S.] are involved in the fight on the ground, from the U.S. commandos to various other security forces, alongside the YPG. There are also reports that they pay YPG terrorists. All aside, they deployed 3,500 truckloads of armored vehicles, weapons, tanks, et cetera, and have 13 military bases, including five air bases. Now they are also establishing a new military base in Raqqa. They are distributing all the weapons, equipment and vehicles in these areas. When this is the actual situation, how convincing is it for the U.S. to say 'I am not involved in this business, I am just watching it, monitoring it from the air?'" Erdoğan said.

'Leaders of tripartite group to meet on Nov. 22 in Sochi'

The first stop of Erdoğan's three-country official visit was the Russian city of Sochi, where he said ending the Syrian war and finding a political resolution was discussed in detail during his meeting with Russian President Vladimir Putin, as well as the bilateral relations between Ankara and Moscow.

Erdoğan said Turkey, Russia and Iran have shown willingness to continue Astana peace process, and the leaders of the tripartite group are scheduled to meet on Nov. 22 in Sochi, a day after a meeting scheduled for the foreign ministers of the the three countries.

"We will have the opportunity to discuss the latest developments, beginning with Idlib and Afrin. As you know, the issue of 12 monitoring points in Idlib [as part of the agreed de-escalation zones] is of particular importance," the president said and added that Turkey has been flexible on demands coming from both Russia and Iran.

He added, however, that the same flexibility cannot be maintained for Afrin, which is currently held by the YPG terrorists, and has been on Ankara's agenda for a possible offensive to eliminate the YPG terrorist elements from the region, in case of demands that may come from Iran.

Ankara argues that Afrin must be purged of YPG elements as part of its aim to clear its borders from terrorist activities. The PYD/YPG, on the other hand has been aiming to establish an autonomous region in northern Syria. Due to its organic links to the PKK, a group listed as a terrorist group by the U.S., EU and Turkey, Ankara argues that the establishment of such a "terror corridor" constitutes a national security threat to Turkey.

"Protecting the demographic structure in Afrin is part of our sensitivies. After the latest settlements there, the population is now about about 55 percent Arab and 30-35 percent Kurdish, with the rest made up of Turkmens. All this needs to be taken into account in the steps taken there.

The president also said that the position against the PYD being invited to any Syria talks is clear and no step will be taken back on this. Russia had recently invited the PYD to the Syrian National Dialogue Congress initially set for Nov. 18. However, after Turkey's objection to the PYD's involvement, the meeting has been postponed.

Erdoğan criticized the recent statement by Putin and U.S. President Donald Trump on the sidelines of an APEC summit in Danang, Vietnam, saying there was "no military solution" to the war in Syria. He added that the political solution is the correct solution, and questioned, "was there no political solution for the past seven years, or an opportunity for it [a political solution]?"

"If it [political solution] was available, then why did they not choose it and instead thousands of people were killed? Who were the main actors responsible for the killings. All this should be considered," he said and added that a political solution must be reached through international monitors, that Turkey is ready to do its part, and all the military deployment to the country should be withdrawn.

$100B goal for trade volume with Russia

Turkey aims to reach $100 billion in its trade volume with Russia, and there is willingness and understanding for this target on both sides, Erdoğan said, as relations between Ankara and Moscow have returned to normal after ties were strained following Turkey's downing of a Russian jet in November 2015.

"We want to have the groundbreaking ceremony of the Akkuyu Nuclear Plant by the end of the month, and the preparations for it are ongoing. A 448-kilometer part of the pipes under Russian waters has been completed for TurkStream. Russia has been making intense efforts for TurkStream," Erdoğan said, adding that while a line will reach Europe through TurkStream, following the meetings in Sochi, a decision was made to build a second one. "The second stream will mostly serve Turkey," he said.

The president also said the S-400 missile defense system deal with Moscow has already been signed and minor details are currently being discussed between Turkish and Russian officials.

'Too early to discuss election alliances'

Amid recent debates about the Nationalist Movement Party's (MHP) support for Justice and Development Party (AK Party) government policies, the possibility of the MHP making an alliance with the ruling AK Party has also been voiced by some analysts.

Erdoğan said it was too early to discuss such matters and that there are no ongoing efforts for this. He added, however, that the MHP and MHP Chairman Devlet Bahçeli's support for the government's policies, particularly on counterterrorism, are appreciated by the AK Party, and that the party is ready to take any steps with the MHP that are in the interest of the country.