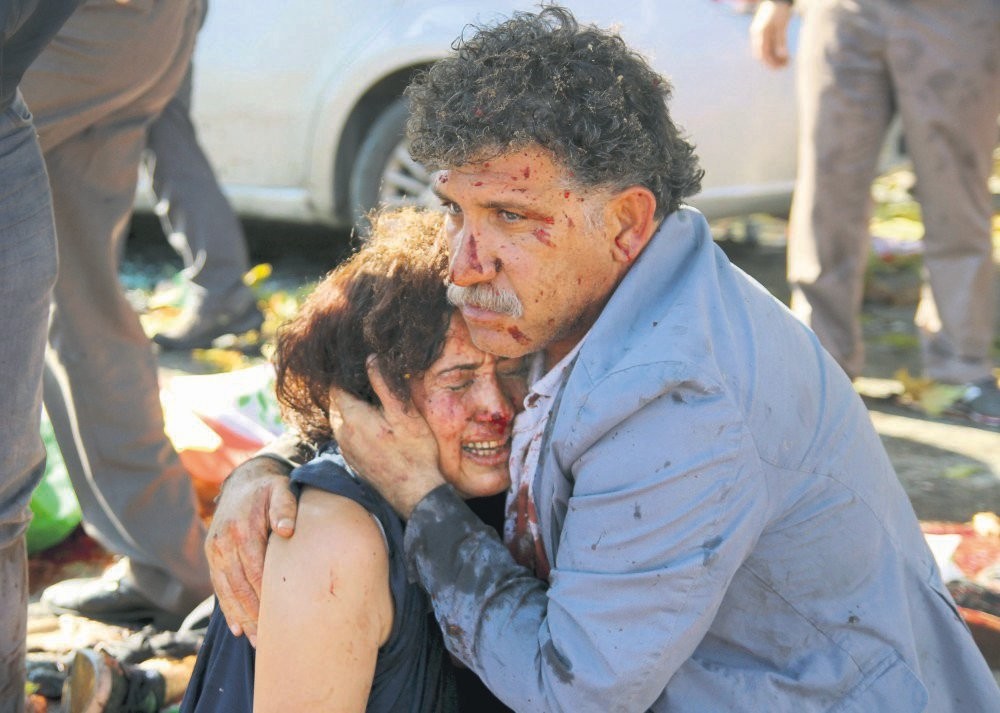 An injured man comforts an injured woman after the suicide attack during a rally in Ankara, Oct. 10, 2015, the deadliest terrorist attack in Turkey's history.
by Daily Sabah Nov 21, 2017 12:00 am

Recent claims suggested that two Daesh commanders who were responsible for some terrorist attacks on civilians in Turkey, including the most deadly one that killed 109 people in Ankara, may be among the Daesh members evacuated from Raqqa as a part of a secret Daesh-YPG agreement revealed by the BBC

Prominent Daesh figures responsible for deadly attacks in 2015 and 2016 in several locations in Turkey may be released as a part of the evacuation deal between Daesh and the Syrian Democratic Forces (SDF), predominantly led by the PKK-linked People's Protection Units (YPG).

A recent article in the Hürriyet daily suggested that Mustafa Dokumacı and İlhami Balı, who are listed in the red category of the Interior Ministry's most-wanted terrorists list and have a $4 million price on their head, could be evacuated from Raqqa with other Daesh militants. The Interior Ministry's list is divided into five, color-coded categories with red designated as the most wanted.

A BBC report revealed details of the agreement to arrange the evacuation of thousands of militants, including some of the most notorious, and their families from Raqqa, with 10 trucks loaded with weapons and ammunition on Oct. 12. The report contains secret footage, interviews with drivers who transported the militants and some Syrians, including a shopkeeper and a smuggler, who spoke on condition of anonymity.

The agreement has been insistently downplayed by Ankara's NATO ally Washington, which supervised the deal and played a major role in the evacuation operation by observing the exodus of the militants. U.S. officials gave vague replies to questions on the evacuation and have called it a "local solution to a local issue."

Dokumacı was the leader of the Dokumacılar (Weavers) group affiliated with Daesh, which allegedly recruited militants, trained them and provided militants for the terrorist group, and was mainly active in southeastern Adıyaman province. The group made its name after Abdurrahman Alagöz, a militant affiliated with the Dokumacılar, detonated himself in Suruç, Şanlıurfa near the Turkish-Syrian border. The suicide bombing, which was the first major attack by Daesh in Turkey, occurred amid a large crowd attending a rally organized by several nongovernmental organizations and killed 32 people.

But the worst was still ahead. On Oct. 10, 2015, a second Daesh attack came when two suicide bombers blew themselves up near Ankara's main train station at a peace rally held by left-wing parties and trade unions, killing 102 people, with the toll later increasing to 109, and wounding over 400 in the deadliest attack in the history of Turkey. One of the suicide bombers in the attack was identified as Yunus Emre Alagöz, the brother of the suicide bomber who carried out the Suruç attack. Both were members of the Dokumacılar.

The other terrorist possibly evacuated in the convoy was Balı, Daesh's Turkey emir, who is responsible for giving orders for the attacks. In addition to them, he also allegedly gave the order to attack the Peoples' Democratic Party (HDP) election rally on June 5, 2015, only two days before the general elections, which killed three people.Turkey intensified counterterror operations in recent months, detaining hundreds of suspects in nationwide raids. Recent comments from security experts suggest that the increased measures could be related to the YPG-Daesh deal and that some of the Daesh suspects may try to infiltrate Turkey working with human smugglers. In a recent operation in Adana, 14 people, an Iraqi and 13 Syrian nationals, were detained and sent to the court. They were reportedly called "Lone Wolf," and arrived to Turkey from Raqqa to carry out vehicle ramming attacks and stabbings the way the organization has done in Europe numerous times.