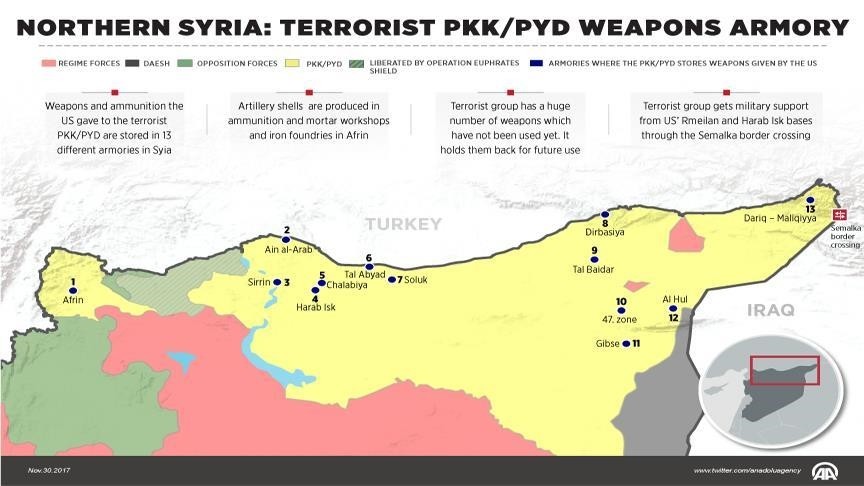 The PKK's terrorist organization's Syrian offshoot Democratic Union Party (PYD) and its armed wing People's Protection Units (YPG) has weapons -- given to them by the United States Central Command (CENTCOM) for fighting against Daesh in Syria -- stored throughout its 13 main bases in areas they seized and control in the region.

Anadolu Agency reporters have identified armories and shipping routes established by the terrorist organization in northern Syria, with information they retrieved from reliable local sources in the PYD-occupied territories and open sources.

The terrorist organization distributes these weapons to its members from these stores.

According to this, since April 2016, the terror group has been receiving military aid from CENTCOM via the Semalka border crossing at the Iraq-Syria border, and from the bases located in northern Hasakah province Rmeilan as well as Harab Isk village in eastern Aleppo province.

The weapons and ammunition are transferred to the terror group by two routes via land and air from Hasakah province.

The heavy weapons, armored vehicles and fuel tankers coming through the land route are distributed to the spots around the Euphrates River.

The weapons that arrive at the air base in Rmeilan from Irbil are distributed to three bases located in Hasakah; Darbasiyah, Tal-Baidar and Derik districts.

Various weapons, ammunitions, and vehicles are transported to main bases in Harab Isk village and Jalabiya at its northeast via land route to the PYD-controlled areas via Hasakah and Qamishli No. 6 motorway and M4 transit-way which runs through from Semalka to Aleppo.

These two bases are also known as the largest bases in the terrorist organization controlled area.

The weapons and ammunitions brought to the U.S. main base that was built last year in Sarrin district near the Euphrates River are also transferred out to the bases in Harab Isk village and Jalabiya by the terrorist organization.

The weapons which are delivered to two main spots -- both from the land route in Semalka and the air route in Sarrin-are then distributed to different bases in Ayn Al Arab (Kobani), Tal Abyad and Saluq in Syria.

The manufacturing of bullets and mortar shells belonging to the terror group and the production of cannon balls are done at some of the iron casting enterprises in Afrin, a district of Aleppo located across Hatay at the Turkish-Syrian border. 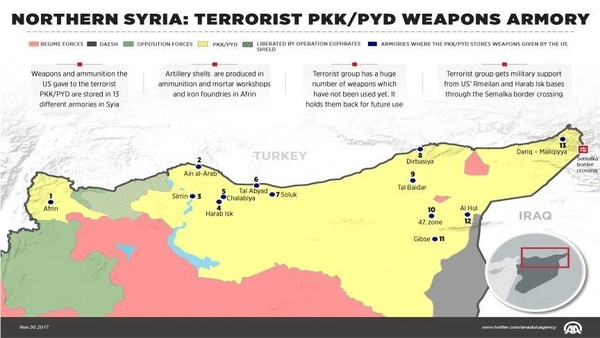 These trucks bring iron, steel and other ignition materials suitable for constructing ammunition.

While some of the ammunition produced is stored in Afrin, some of it is sent to the other area-controlled by the terrorist organization.

The CENTCOM is also arming the PYD in Deir el-Zour region at Iraq-Syria border on the grounds of combating against Daesh.

The terrorist organization is receiving weapons through the land route.

The shipment arriving from Simelka gate at the Iraq-Syria border is being stored at two different settlements at the 47th region of al-Hul neighborhood of Shaddadi district of southern Hasakah.

The U.S. security institutes, aside from its military support, are in active cooperation with the terrorist organization with its nearly 2,000 troops in 10 locations.

The military bases mainly located alongside the M4 highway from the Iraq-Syria border to northern Syrian city of Aleppo, are among the places used to deliver weapons to PYD.

Aside from the bases in Tal Abyad, Tal Baydar, Ayn al-Arab and Harap Ishk in northern Syria where the CENTCOM forces and experts are deployed via Rmeilan air base, Cebce residences in Shaddadi and Sirrin also serve as repositories for the terrorist organization.

Weapons are supplied from the bases to U.S. forces and PKK/PYD terrorists.

Most of the weapons and ammunition CENTCOM supplied to the PYD on the grounds of combating against Daesh is yet to be used.

According to the information obtained by Anadolu Agency, the unused weapons are being stored in Harap Ishk, located 21 kilometers off the Turkish border.