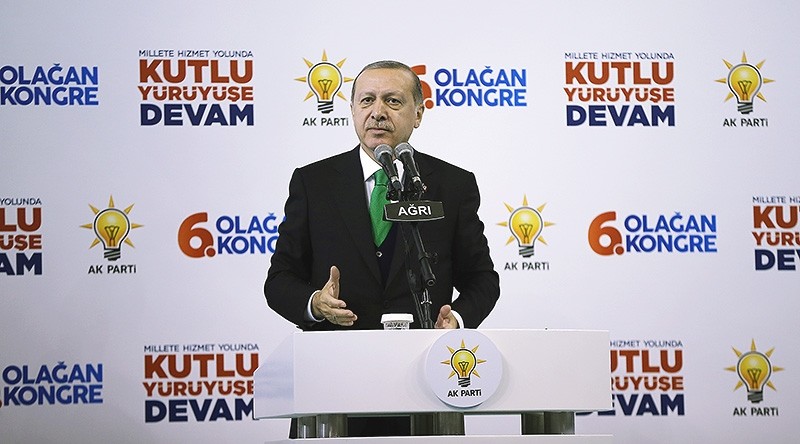 Turkey's President Recep Tayyip Erdoğan said Sunday the PKK's Syrian offshoot, the Democratic Union Party (PYD) does not care about the well-being or future of the Kurdish people in Syria.

Addressing the ruling Justice and Development (AK) Party members in the eastern province of Ağrı, Erdoğan said the terrorist group was being used as a "pawn" by some states and powers and would be disposed of eventually.

"Do you believe that PYD in Syria is working for the benefit and future of our Kurdish brothers?" Erdoğan asked. "Never. This is not the case."

He said he has always spoken out against the abuse of Kurdish people's rights by Bashar al-Assad's regime.

"I asked him, back in the days when we were on good terms, why they did not give them [Kurds] identity cards or passports. But Assad never cared about them."

"Whoever established Daesh and armed them, and wreaked carnage in the country [Syria], is now arming and controlling and guiding PYD," he said, in an indirect reference to the U.S.

For the Syrian people, their "only friend" is Turkey, he added.

Erdoğan later attended another party meeting in the neighboring Muş province, where he warned businessmen against moving their assets abroad, calling it a "treacherous" attempt.

"I am getting some news that some businessmen are trying to move their assets abroad. I am calling on the Cabinet to never allow such a move. Because this is treason," Erdoğan said without giving any names or other details.

He added that Turkey was a strong country that could take the necessary stand to protect its independence and national interests, no matter the circumstances.

The council met under the leadership of Erdoğan in capital Ankara.

"PYD terrorist organization's efforts to carry out a covert ethnic cleansing by changing the demographic structure of Syria is against international law and human rights, and, therefore, it is unacceptable," said a statement released after the meeting.

Turkey will continue to take every necessary measure at the Turkey-Syria border area to ensure its own security, the council said.

The PYD is the Syrian branch of the PKK terrorist network, which has waged war against Turkey for more than 30 years.

While recognizing the PKK as a terrorist group, the U.S. has treated the PKK/PYD/YPG as an ally in its anti-Daesh efforts, despite its PKK ties documented by Turkey.