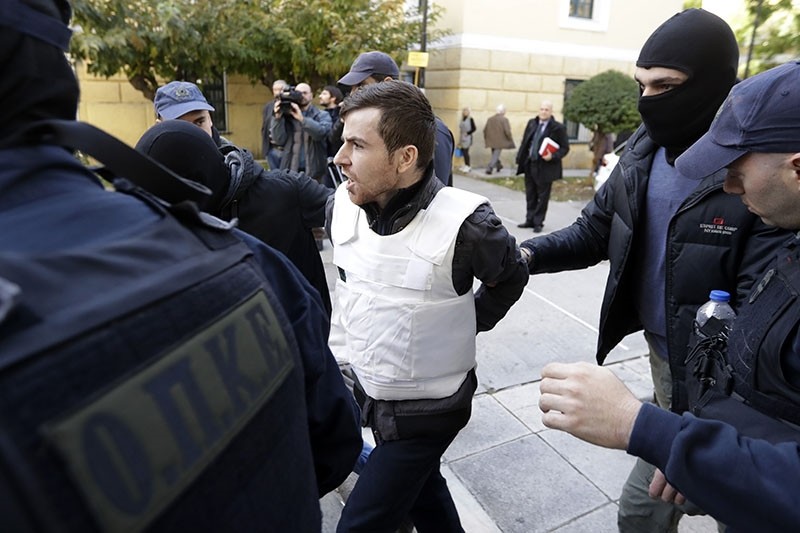 Basing their article on security sources, the Greek To Vima newspaper reported that the captured militants were planning to assassinate President Erdoğan with rocket launchers, grenades and Molotov cocktails.

Erdoğan was codenamed "Scorpion" in the assassination plan, the report said, adding that two groups of militants were to attack Erdoğan's convoy from sides with rockets during its passage, while a third group was to attack from the vehicle's rear.

The report added that security forces are still working to locate the rocket-propelled grenades and ammunition, believed to be buried in the foothills of Parnitha Mountain near Athens.

On Nov. 28, nine DHKP-C members were detained in a simultaneous operation in which three safe houses were raided ahead of Erdoğan's visit on Dec. 7 and 8. A Greek court ruled for their arrest on Dec. 5.

Forged passports and IDs were found in the suspects' possession during the raids. Police also found bomb-making materials and guns.

One of the captured militants was Hasan Biber, one of the perpetrators of the 2013 attacks which targeted the ruling Justice and Development Party's (AK Party) headquarters and the Ministry of Justice in capital Ankara. Biber was previously detained in Greece for crossing the Aegean from Chios Island to Turkish mainland with a boat carrying ammunition, but was later released in 2014 and went into hiding.

Greece has long been one of the countries in which the DHKP-C is very active, and the terror group operates a camp, disguised as a refugee camp, located in the town of Lavrion, 60 kilometers (37 miles) southeast of Athens. However, in recent years, the cooperation between the two countries have increased.

The country changed its much criticized policy of tolerance for DHKP-C supporters and a number of militants were arrested in 2014 in several operations, including high-ranking members of the group. The move was seen as improving counter-terrorism cooperation between Turkey and Greece, although the refusal of Greek courts to extradite several suspects overshadowed the efforts.

The DHKP-C, although less influential in Turkey than other terrorist organizations such as the PKK, still represents a considerable threat to the country's security, especially after a recent string of attacks.

The group is an offshoot of a Marxist-Leninist movement that was established in the 1970s. It was founded in the 1990s after it splintered off from a larger group of far-left organizations responsible for a string of attacks that include the assassination of two politicians in 1980, several intelligence officials and Özdemir Sabancı, a member of the Sabancı family, one of the richest families in Turkey owning a large conglomerate of companies.

In addition to attacks against Turkish security forces, the DHKP-C is also responsible for the suicide bombing at the U.S. Embassy in the capital Ankara that killed a Turkish security guard and injured a journalist in February 2013. It also claimed responsibility for non-lethal rocket attacks targeting the Justice and Development Party (AK Party) headquarters, the Turkish National Police headquarters and a Justice Ministry building in Ankara in 2013.

The DHKP-C was also responsible for killing of Mehmet Selim Kiraz, a prosecutor who was investigating the possible negligence of police in the death of 15-year-old Berkin Elvan during Gezi Park riots. Kiraz was killed in his room at an Istanbul courthouse on March 31, 2015 after two militants took him hostage for several hours.

The DHKP-C, in addition to attacks on Turkish security forces, is responsible for a suicide bombing at the U.S. Embassy in Ankara. The incident killed a Turkish security guard and injured a journalist in February 2013.