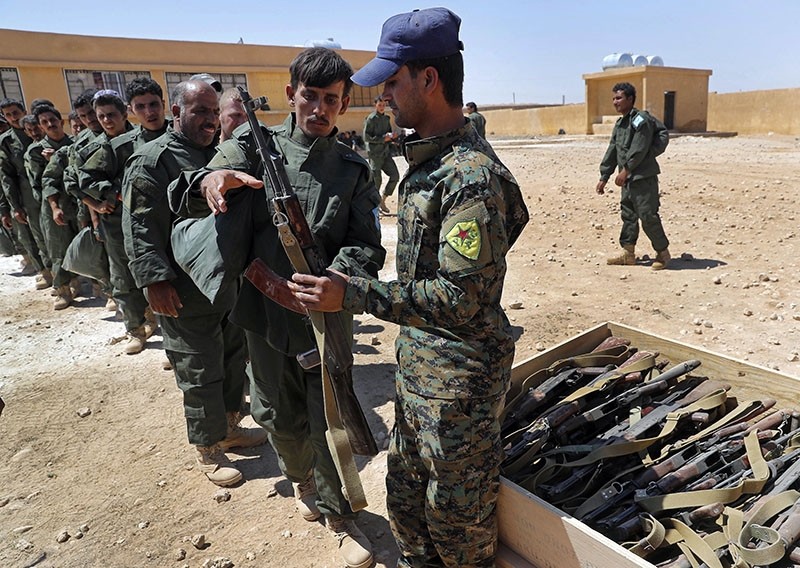 The U.S.-led coalition confirmed reports Saturday that it will establish a 30,000-strong new border security force with the People's Protection Units (YPG)-led Syrian Democratic Forces (SDF) in Syria, a move that has already angered Turkey.

The coalition named the "new" army the Syrian Border Security Force (BSF). About 15,000 of the fighters will be SDF veterans as the fight against Daesh comes to a close. Another 15,000 will be recruited and trained in the near future. Currently, 230 individuals are training in the inaugural class, according to the coalition statement.

This makes almost certain that the U.S. designated terror group PKK's Syrian armed YPG militia will be deployed to the Turkish-Syrian border, a move that will further increase tensions in the area as well as with Washington.

The Foreign Ministry summoned U.S. Charge D'affaires Phil Kosnett on Wednesday following an Anadolu Agency report saying that a group of 400 fighters from the YPG-led SDF have been trained as border guards. The group, "named as the North Army by the PKK, was provided with technical training as well as military training and 'high-tech equipment,'" according to the report.

A curious part of the statement is that the Combined Joint Task Force, Operation Inherent Resolve, would deploy some of the border force along the Euphrates River Valley, a natural border with the Assad regime forces and the Russians.

"The Border Security Force will be stationed along the ERV to the west, along the Iraqi border to the southeast, and along the border with Turkey to the north. They will serve under the leadership of the SDF. They will be providing border security through professionally securing checkpoints and conducting counter-IED operations," the coalition added.

On Thursday, Pentagon spokesman Eric Pahon refused to provide details of the training given to the so-called "North Army," but added that the Pentagon has maintained full accountability and transparency with the Turkish government over the aid granted.