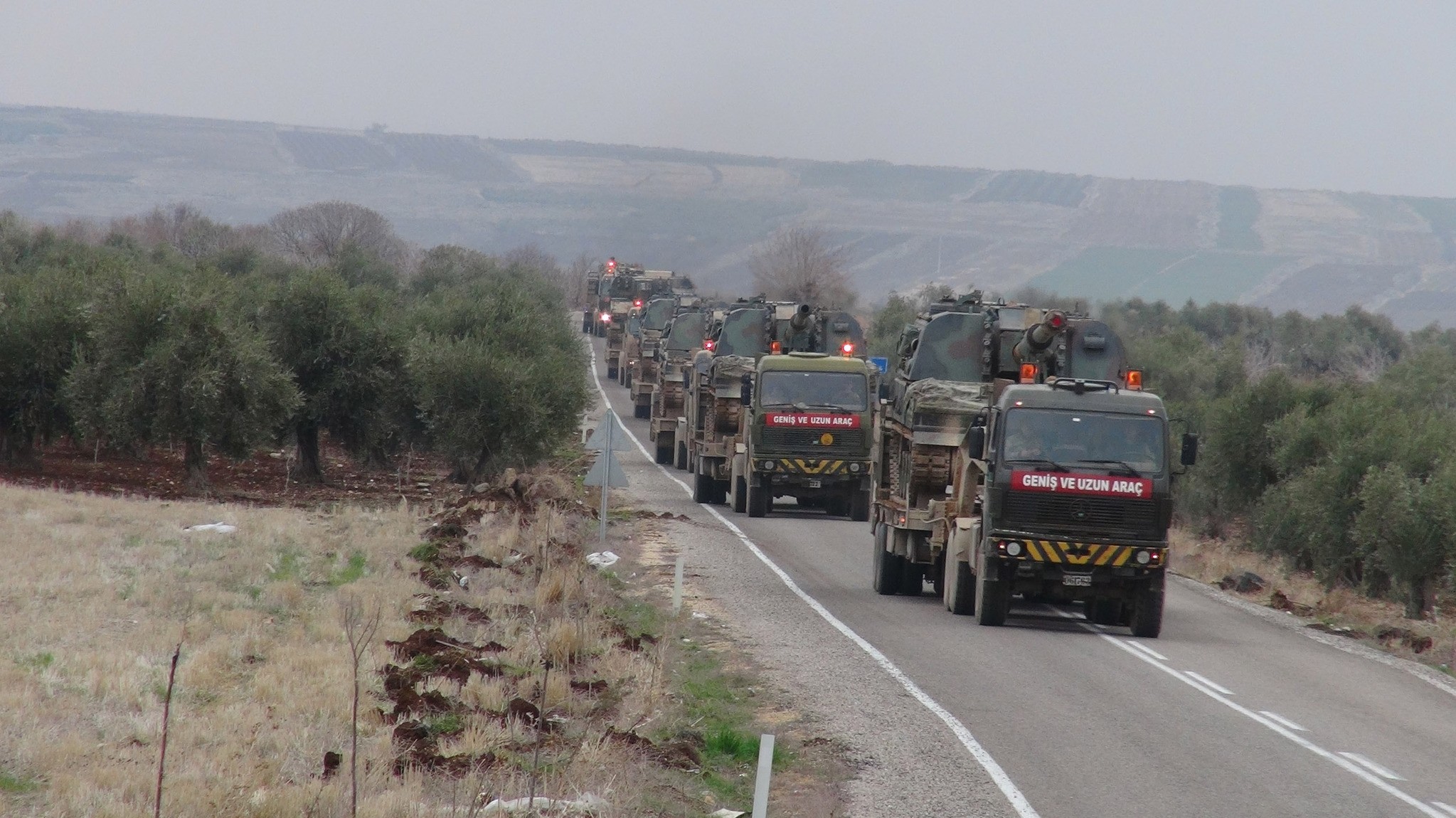 A Turkish military convoy is being dispatched to the Syrian border in Turkey's southern Kilis province, Jan. 4.
by Daily Sabah Jan 15, 2018 12:00 am

Ankara is getting ready for a military operation against the threat of a terror corridor on the Syrian border, dispatching military convoys to southern cities, hitting PKK/PYD targets in Afrin

A large number of military convoys are being dispatched to the Syrian border as part of the preparations for a new operation to prevent the formation of a terror corridor by the PKK terrorist group's Syrian affiliates that are based in northwestern Syria's Afrin province. Security sources, who spoke on condition of anonymity due to restrictions on talking to media, said that the convoys of heavy weapons including several tanks, were dispatched to the Syrian border in Turkey's southern Hatay province, as well as to security posts inside Idlib province which were established in late 2017 as a part of a de-escalation agreement.

On Saturday, Turkish security forces started to hit several PKK/PYD targets in the Afrin district of Syria's Aleppo province, which is controlled by the PKK-linked Democratic Union Party (PYD) and its armed wing the People's Protection Units (YPG). According to information gathered by Anadolu Agency (AA) in Idlib, Turkish artillery units hit PKK/PYD forces from the Reyhanlı and Kırıkhan districts of Turkey's southern Hatay province and a Turkish Armed Forces (TSK) observation point in Idlib. The TSK fired at least 36 times during the artillery bombardment on Afrin's Bosoufane, Cindirese, Deir Bellout and Rajo districts.

President Recep Tayyip Erdoğan signaled a military operation on PKK controlled areas in Syria, saying on Sunday that Operation Euphrates Shield will continue with an Afrin operation in the "coming days."

Speaking at the provincial congress of the ruling Justice and Development Party (AK Party) in the central province of Tokat, the president said that Turkey is determined to fight against PKK terrorists across its borders, as well as inside the country.

Can Acun, a Middle East expert at the Foundation for Political, Economic and Social Research (SETA), stressed that the mounting military build-up along the border near the Afrin region signals an imminent offensive against the PYD-held area.

Drawing attention to President Erdoğan's statements over the weekend, the SETA expert also argued that the Turkish Armed Forces might have contacts inside Kurdish and Arab groups in Afrin to collaborate with during a possible operation.

The operation achieved its objective of driving out Daesh and it managed to force the YPG to withdraw east of the Euphrates River, except in Afrin and Manbij.

Since then, Ankara has been giving signals of a possible military offensive on Afrin and it has a large number of military units deployed near Idlib to keep a tight grip on the town.

"Turkey will continue the operation to clear its southern border from terror with Afrin. We urge the international community to support Turkey's legitimate efforts," Erdoğan said, adding that slightest harassment from across the border will be seen as a "signal flare to start the steps that need to be taken."

He also said that Turkey does not differentiate between terrorists, and it treats all terrorist groups equally no matter where they are located.

According to information obtained by AA from local sources, YPG terrorists in northern Syria have reportedly geared up to establish a regular army called the "Army of the North" with U.S. assistance. The sources said the U.S. military completed the training of 400 YPG members, following an announcement from the U.S. Central Command (CENTCOM) Commander Gen. Joseph Votel on Dec. 22, 2017, about forming border guard regiments.

President Erdoğan also spoke about the operation on Saturday, saying, "We are destroying the western wing of this corridor with the Idlib operation."

Erdoğan said that if the terrorists in Afrin did not surrender, Turkey would interfere. He further expressed that the country would act alone to protect its security against YPG terrorists even if the U.S. continues its partnership with the group.

The PYD and YPG are the Syrian offshoots of the PKK, which is jointly listed as a terrorist organization by Turkey, the U.S. and EU. Washington reneged on its promise to cease its support for the PYD and the YPG after Daesh was defeated in Syria, and has substantially increased weapons and technology support to the group.

Despite the PKK being officially listed as a terrorist group, Washington continues to support the PYD and the YPG as their "most effective partner against Daesh," overlooking their links to the PKK.

The support has become a strong factor in the deterioration of ties between the two NATO allies, bringing relations to historic lows in recent years.

Since the PKK launched its terror campaign in 1984, an estimated 40,000 people have been killed in Turkey in related violence. Following a fragile cease-fire, the group resumed fighting in July 2015. Since then, it has been responsible for the deaths of approximately 1,200 security personnel and civilians, according to an official tally.

In August, Turkey signaled the operation for the first time as the president said that the military will make new moves in the region and the Turkish military started to deploy military vehicles to the border province of Kilis, just across Afrin.

"We will not allow nesting of terrorists alongside our borders," Erdoğan further said last month, adding that the terrorists will be eliminated from the Syria's Afrin and other regions.

Following the YPG terrorist group's taking control of Afrin earlier last year, the city is now considered one of the major strongholds of the PKK. The terrorists in Afrin have occasionally carried out cross-border attacks against the Turkish military, despite the presence of American and Russian military experts in the area.