Turkey to take 'any steps necessary immediately' to 'defeat threats' 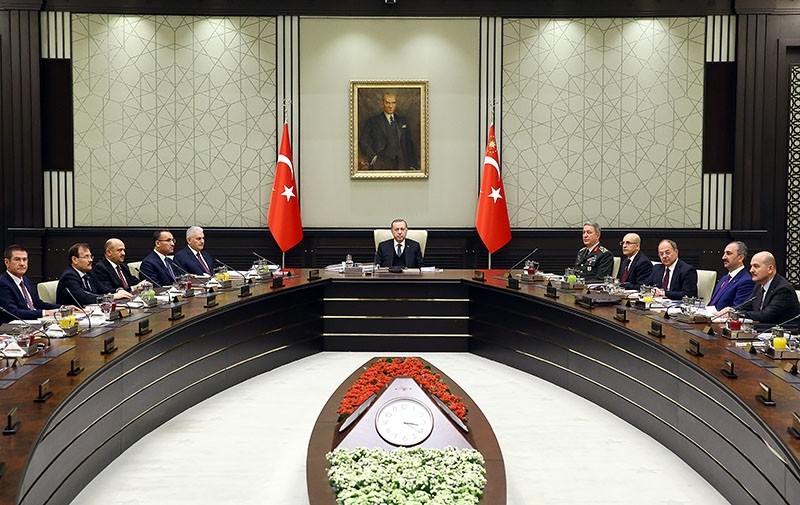 Turkey's top security body, the National Security Council (MGK), said Wednesday it will take "any steps necessary immediately" to "defeat threats" upon the United States' announcement that it is building an army of PKK-affiliated People's Protection Units (YPG) terrorists on the Syrian border.

The Council convened Wednesday under the chairmanship of President Recep Tayyip Erdoğan to discuss a possible operation on the northwestern Syrian town of Afrin — which is held by the PKK's Syrian affiliate the Democratic People Union (PYD) and its armed wing the YPG — and the extension of the state of emergency for another three months.

"The establishment of a terror corridor and the formation of a terrorist army across the border will not be allowed," the statement by the Council said, referring to the U.S. plan to establish a 30,000-strong SDF border security force.

"It is regrettable that a state, which is part of NATO and our ally in bilateral relations, declares the terrorists as its partner and provides them with weapons, without any concern for our safety," the statement added.

Along with its intent to act immediately against threats on the border, the MGK demanded that all weapons given to YPG terrorists in Syria be collected immediately. The U.S. has reportedly provided the terrorist group with a large supplies of weapons, as well as military training.

"Weapons, tools and materials given to PYD/PKK-YPG terrorist group must be collected without delay," the statement said, adding that the fight against Daesh has been completed on a large scale.

Turkey's Cabinet of Ministers agreed Wednesday to extend the state of emergency for another three months, Deputy Prime Minister and Government Spokesman Bekir Bozdağ said following the recommendation of the MGK made earlier in the day.

The proposal has to be approved by the Parliament General Assembly with a simple majority, where the ruling Justice and Development Party (AK Party) holds 316 of 550 seats.

In the previous vote for an extension on Oct. 17, 2017, the AK Party and opposition Nationalist Movement Party (MHP) voted in favor of the motion, while main opposition Republican People's Party (CHP) and the Peoples' Democratic Party (HDP) voted against it.

Turkey declared a state of emergency on July 20, 2016, following a deadly coup attempt by the Gülenist Terror Group (FETÖ) that killed 250 people and left 2,200 injured.

Security forces have since arrested thousands of people suspected of involvement in the coup bid, many of whom were in positions in the government and the military.