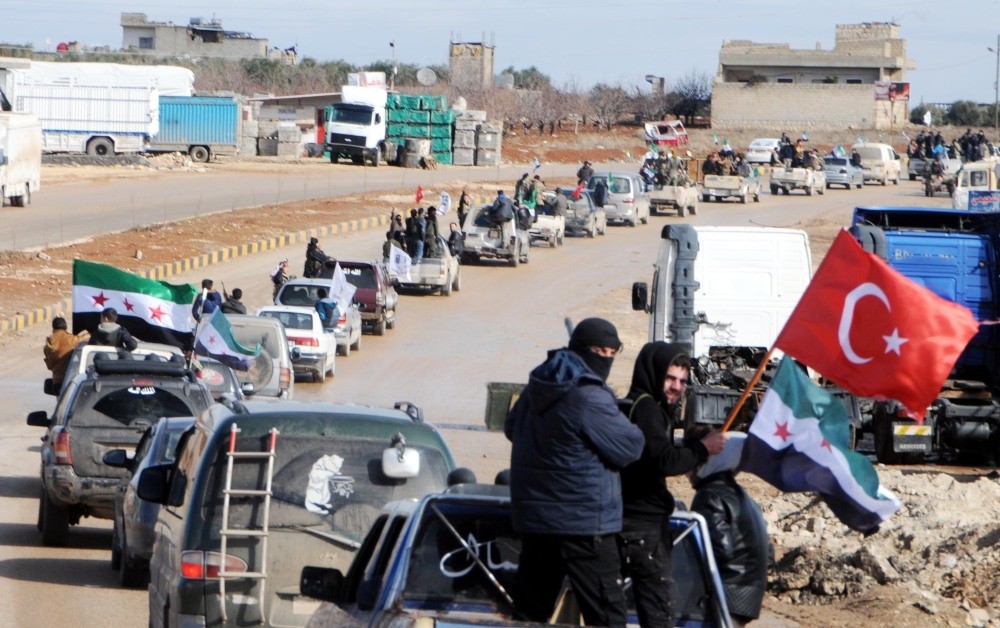 Turkey-backed FSA fighters were deployed Friday to the Azaz region in northern Syria near the Turkish border to encircle Afrin.
by Daily Sabah Jan 20, 2018 12:00 am

Turkish security forces launched a military offensive into Afrin on Friday following a withdrawal of Russian forces to sweep out the PKK-affiliated Democratic Union Party (PYD) and its armed People's Protection Units (YPG).

Russian forces' withdrawal came shortly after Defense Minister Nurettin Canikli said that Russia informed Turkey about its plans to pull out its military assets from the Syrian district.

The minister said talks between Turkish and Russian officials regarding the operation will continue. Shortly after Canikli's remarks, sources in Afrin told Anadolu Agency that the Russian military had started to withdraw its forces deployed in the northeastern Kafr Jana region of Afrin. Some Russian security assets have reached Nubl and Zahra on the outskirts of Afrin, which are currently held by the Syrian regime.

Ankara has been rumbling about the operation to prevent a "terror corridor" from forming along its border.

President Recep Tayyip Erdoğan said last Monday: "It is our duty to choke this terrorist army before it is born," following the recent controversial move by Washington to form a security force in northern Syria.

On Sunday, Ryan Dillon, a spokesman for the U.S.-led coalition against Daesh, announced plans to establish a 30,000-strong border security force in northern Syria with the Syrian Democratic Forces (SDF), led by the YPG.

Turkey-backed Free Syrian Army (FSA) fighters were deployed Thursday night to the Azaz region in northern Syria near the Turkish border to encircle Afrin. FSA fighters with heavy weapons were deployed along the border with Afrin to counter attacks from the YPG and build check points on the Afrin highway to prevent possible attacks.

Also, a convoy of FSA fighters that entered Azaz in the late hours of Thursday from different parts of opposition-held districts in northern Syria said they will be doing their part in the Afrin operation against the YPG. Sources also reported that the YPG is also expanding its deployments in Afrin and Manbij, stationing more than 140 vehicles in the districts and preventing civilians from leaving the region.

In an interview with Turkish broadcaster A Haber, Canikli said they are working to minimize possible losses of Turkish troops, adding that Turkey has all the information available regarding the number of YPG militants, their weapons systems and locations, and is capable of blocking the group's defense systems.

Commenting on the U.S.'s recent statement on the Afrin operation, he said the statement is tactical in nature and aims to create confusion while employing "psychological warfare."

Prime Minister Binali Yıldırım also said on Friday that Turkey would not tolerate any threats to its national security.

"Any formation that threatens the national security of Turkey will never be tolerated. This is our natural right. It is a right as part of international law and Turkish law, as well," Yıldırım said in a speech at a vehicle delivery ceremony at the Disaster and Emergency Management Agency (AFAD) in Ankara. He added that Turkey's aim is to eradicate terrorism from the region, referring to Syria.

U.S. State Department spokeswoman Heather Nauert on Thursday called on Turkey to refrain from a military operation into Afrin against the YPG.

"We would call ... on the Turks to not take any actions of that sort. ... We don't want them to engage in violence but we want them to keep focused on ISIS," Nauert said Thursday during a briefing using another acronym for Daesh.

The Bashar Assad regime handed over Afrin to the YPG without putting up a fight, and there are currently some 8,000-10,000 terrorists in the area.

Meanwhile, sources from Tal Abyad, Syria have said that the U.S. on Friday positioned a force of nearly 1,000 from YPG in the town, which held by the Syrian Democratic Forces (SDF), along the Syrian border with Turkey's Hatay province.

According to AA, the YPG elements were brought to Tal Abyad from Ayn Issa, south of YPG-held Kobani. Prior to the deployment, the report said that 10 U.S. armored vehicles had recently come to the region to investigate the posts where YPG members are positioned. While previously there were about 15 YPG terrorists in the posts, after the deployment on Friday, the number had reportedly reached about 100 per watch post.

The Afrin operation would be a first phase of plans to clear PKK-affiliated groups from Turkey's Syrian border, as officials signaled Ankara's persistence to annihilate the terrorist groups.

Late Tuesday, Foreign Minister Mevlüt Çavuşoğlu said that Turkey may expand its operations in northern Syria to Manbij and east of the Euphrates River after Afrin has been cleared.

"Turkey's precautions against the YPG and PKK cannot be limited to Afrin alone. There is also Manbij and east of the Euphrates River," Çavuşoğlu said, adding that the U.S. plan to establish a border force in northwest Syria "irreversibly harms U.S.-Turkey ties."

Ankara strongly disagrees with Washington backing the YPG in the war against Daesh in Syria, and it as one of the main reasons underlying the strained ties between the two NATO allies.

The operation in Afrin – bordering Turkey's Hatay and Kilis provinces – was widely expected in the wake of Turkey's Operation Euphrates Shield in northern Syria, which began on Aug. 24, 2016 and ended in March 2017.

The operation achieved its objective of driving out Daesh and it managed to force the YPG to withdraw east of the Euphrates River, except for in Afrin and Manbij. Since then, Ankara has been giving signals of a possible military offensive into Afrin and it has a large number of military units deployed near Idlib to keep a tight grip on the town.