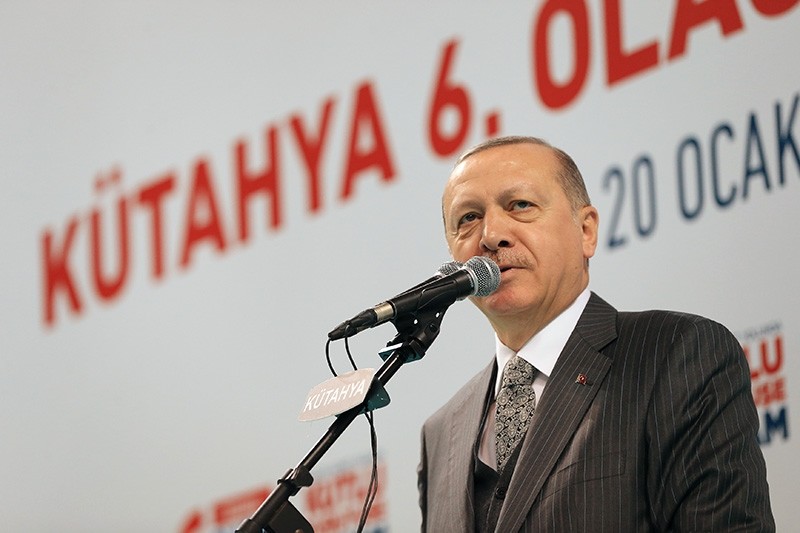 President Recep Tayyip Erdoğan said Saturday that Turkey has virtually started a military operation on the ground against the PYD/YPG terror group, the Syrian offspring of the PKK terror organization, and it will be followed with an operation in Manbij, which is also occupied by PYD forces.

Speaking at the provincial congress of the ruling Justice and Development Party (AK Party) in central Kütahya, Erdoğan said that Turkey is determined to clear its borders of terrorists, and stressed that the country has no negative plans that would harm the territorial integrity and independence of Syria.

He said that the operation aims to improve Turkey's national security to prevent a "terror corridor" from being formed along its southern border.

"Those who arm terrorists will soon understand that there is no reliable partner in the region besides Turkey," he said.

He criticized the United States for working with the PKK, an organization which is in the terrorist list of the U.S. and the European Union.

"They know it very well. They are trying their best to deceive Turkey and the world," he added.

Ankara strongly disagrees with Washington backing the YPG in the war against Daesh in Syria, and sees it as one of the main reasons underlying the strained ties between the two NATO allies.

Since the mid-1980s, the PKK has waged a wide-ranging terror campaign against the Turkish state in which an estimated 40,000 people have been killed. Following a brief reconciliation period between 2012 and 2015, the PKK, using the civil war in Syria to its own advantage, relaunched its attacks against Turkey in July 2015, leading to the deaths of nearly 2,000 security forces and civilians.

The operation achieved its objective of driving out Daesh and it managed to force the YPG to withdraw east of the Euphrates River, except for in Afrin and Manbij. Since then, Ankara has been giving signals of a possible military offensive into Afrin and it has a large number of military units deployed near Idlib to keep a tight grip on the town.