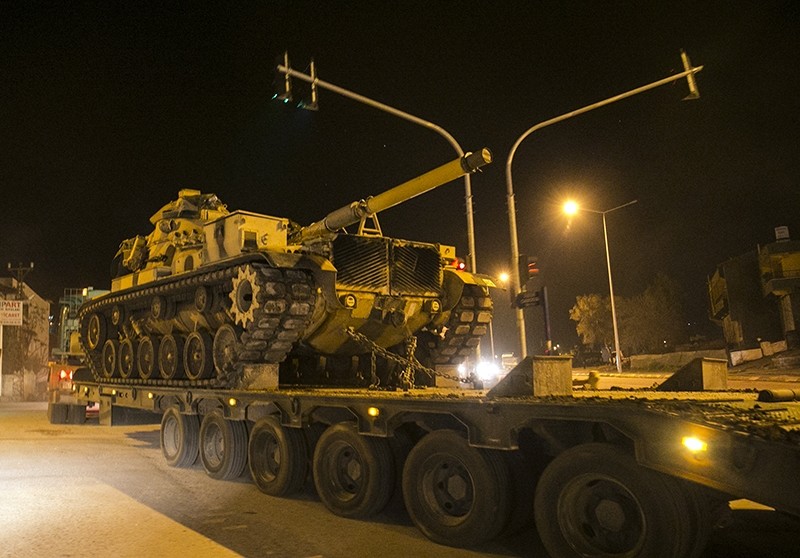 According to Anadolu Agency reporters on site, FSA fighters backed by the Turkish military started advancing toward the northern Syrian city in the early hours.

"108 targets, which were used as shelters, hideouts and ammunition depots by terrorist organizations PKK/KCK/PYD-YPG and Daesh in seven areas, were destroyed by the air force," the military said in a statement late Saturday.

The operation was being carried out under the framework of Turkey's rights based on international law, U.N. Security Council's decisions and self-defense rights under the U.N. charter, the military added.

The statement said the operation will also take sensitivity into account and no civilian or innocent person would be harmed.

The YPG is the Syrian offshoot of the PKK terrorist group, which has been designated as a terrorist organization by Turkey, the U.S. and the EU.

The Turkish cities of Kilis and Hatay across the Syrian border are within the firing range of the YPG from Afrin, which sits atop a hill. The terror group has also used Amanos Mountains to penetrate into Turkey from Syria.

Turkey has been backing the Syrian moderate opposition FSA forces, and liberated Syria's al-Bab and cleared Daesh terrorists off the country's borders. Over 2,000 square kilometers of land in northern Syria had been liberated from Daesh terrorists, allowing some 100,000 people to return to their homes.