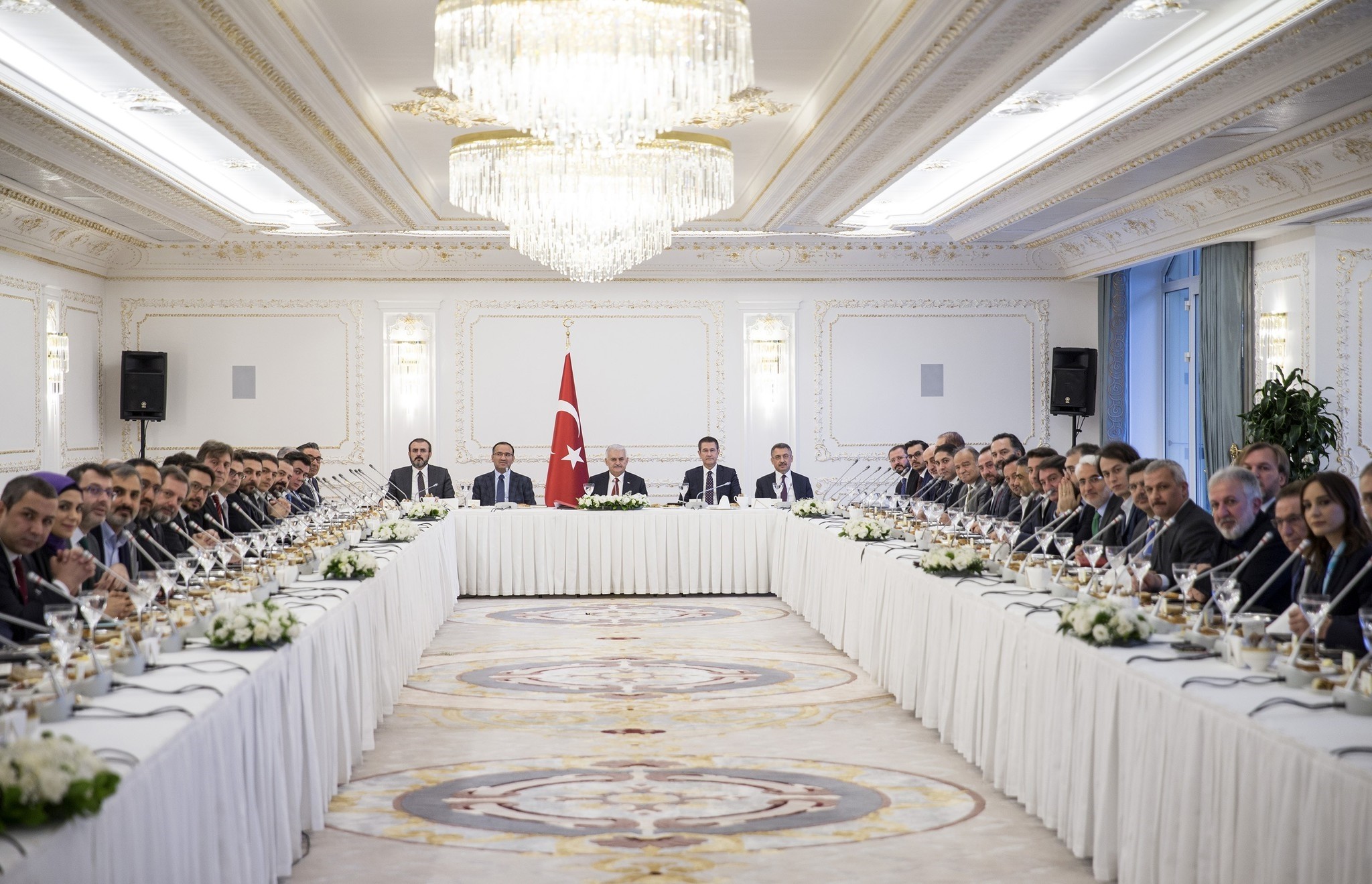 Turkey's Operation Olive Branch on Syria's Afrin, which started at 5 p.m. on Saturday, to eliminate threats by the PKK terror organization's Syrian affiliate, the Democratic Union Party (PYD), and its armed wing, the Peoples' Protection Units (YPG), entered its second day yesterday as the ground forces crossed into Syria to back the Free Syrian Army (FSA) in efforts to establish a terror-free zone in Afrin. Prime Minister Binali Yıldırım held a press conference with leading media representatives in Istanbul, where he said the aim of the operation is to create a 30-kilometer-deep safe zone in the region to ensure Turkey's national security and that the operation would be conducted in four phases, with the Afrin offensive being the first leg. 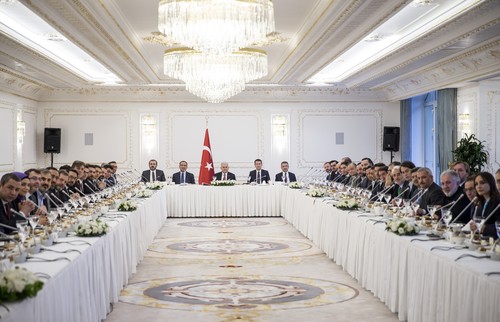 Prime Minister Binali Yıldırım said Sunday the operation on Afrin targets only the YPG and Daesh terrorists, not civilians.

The ground operation begun as of 11:05 a.m. local time, Yıldırım said and added that with the operation, Turkish security forces and the FSA will clear the region of PKK and YPG terrorists and affiliate groups, as well as Daesh terrorists. According to reports, Daesh terrorists fleeing after the Raqqa offensive conducted by the U.S. and the YPG-led Syrian Democratic Forces (SDF) had escaped to the Afrin region.The prime minister highlighted during the closed-door meeting that ran from 11:30 a.m. through to 12:20 p.m., that all related diplomatic missions, including the Syrian Consulate in Istanbul, were informed about Turkey's offensive on Afrin.

"We have informed [the regime in Syria] through a written notice," Çavuşoğlu told Turkish NTV broadcaster in a live interview. "This does not mean that we have taken permission from them. We gave such notice because we are acting in accordance with international law," he added. On Saturday, envoys and mission chiefs of permanent members of the U.N. Security Council – the U.S., U.K., Russia, France and China – were invited to the Turkish Foreign Ministry for a briefing on Operation Olive Branch. Yesterday, the envoys from Qatar, Kuwait and Saudi Arabia were also summoned to the Foreign Ministry for a briefing on the operation. The EU Delegation Head Christian Berger was also called to the foreign ministry yesterday and briefed about the operation by the Deputy Undersecretary Sedar Önal.

The Turkish chief of staff spoke to Iran's Military Chief of Staff Maj. Gen. Mohammad Bagheri on the phone and exchanged views on cooperation against terrorist groups in Syria, according to a military official, who spoke on condition of anonymity due to restrictions on talking to the media. Associated Press reported yesterday that Iran's Foreign Ministry had condemned the operation on Afrin, quoting Iran's IRNA news agency, which had quoted Iranian foreign ministry Spokesman Bahram Ghasemi. According to a statement by the Turkish Armed Forces (TSK) Sunday, a total of 153 previously identified YPG targets were hit. In another statement Sunday, the TSK also said 45 targets were hit in airstrikes conducted by 32 fighter jets. On the first day of the offensive, 72 Turkish warplanes reportedly conducted airstrikes on Afrin, ahead of the move by the ground forces, which crossed into Syria on Sunday from Turkey's border province of Kilis. Yıldırım said there are about 8,000 to 10,000 PKK-affiliated terrorists in the region. The prime minister did not elaborate whether the operation will continue on YPG-held Manbij, saying, "The U.S. has a promise there, we are waiting for that to be fulfilled."

The Turkish border towns of Kilis and Hatay are within the firing range of the PKK/PYD group based in northern Syria's Afrin, which sits atop a hill. The terrorist group has also used the Amanos Mountains in Syria to launch attacks on Turkey. The operation is being conducted under the framework of Turkey's rights based on international law, the U.N. Security Council's decisions, especially no. 1624 (2005), 2170 (2014) and 2178 (2014) and as per the right to self-defense under the 51st item of the U.N. charter, with respect to Syria's territorial integrity. YPG terrorists have been heavily armed by the U.S. under the pretext of fighting Daesh in Syria, a disagreement that has brought Ankara-Washington ties to historic lows. Turkey sees the YPG and PYD as the Syria affiliates of the PKK terrorist organization, recognized as a terrorist group by the U.S., U.K., EU and Turkey, while the U.S. has sent them more than 4,500 truckloads of weaponry and armament, in addition to giving them field training. With the current operation, Turkey aims to clear its border of YPG presence so that the PYD cannot establish an autonomous region, which Turkish officials call a "terror corridor," by connecting the northwestern Afrin canton to the Kobani and Jazeera cantons in the northeast.

Two of the main powers in Syria, the U.S. and Russia, released statements on Afrin, saying the developments are being monitored. The Pentagon on Saturday said it recognized Turkey's security concerns about the PKK terrorist organization. "We recognize Turkey's security concerns about the PKK, a U.S.-designated foreign terrorist organization," Adrian Rankine-Galloway, the Pentagon's spokesman, said in a statement sent to Anadolu Agency (AA). "The U.S. does not provide any support to the PKK," it said.

France has called for an emergency meeting of the U.N. Security Council on Syria following the launch of Turkey's counterterror operation in northern Syria's Afrin province, French Foreign Minister Jean-Yves Le Drian said Sunday. "Ghouta, Idlib, Afrin - France asks for an urgent meeting of the Security Council," Le Drian said on his Twitter feed. He added that he had spoken with his Turkish counterpart Mevlüt Çavuşoğlu on Sunday morning. Çavuşoğlu also said yesterday that he spoke to his French counterpart over the phone and warned that those who would take Turkey's fight against terrorism to the United Nations Security Council were siding with the terrorist elements. "We expect France's support," said Turkish foreign minister during a press conference in Baghdad, where he met with Iraqi officials. Syria's Assad regime, on the other hand, condemned the Turkish airstrikes against the Afrin region on Saturday and said Ankara had not informed it of the military operation, state media said quoting a foreign ministry official, according to a Reuters report.

Meanwhile, according to a security source speaking to AA, the terrorist organization is using images of its "child warriors" in its black propaganda against the TSK. The terror group is using one of the news agencies affiliated with the group to spread propaganda videos aimed at boosting the morale of terrorists in Afrin, the source, who spoke on condition of anonymity due to restrictions on talking to the media, said. In the propaganda video, two young girls and an adult female terrorist can be seen with handguns. It is clear that the children in the video are terrified and one of the children looks disturbed when she talks. The PKK and YPG's use of child soldiers and the forceful recruitment of its terrorists have been acknowledged by international human rights organizations, as well as the U.N. High Commissioner for Human Rights.

FSA said that four villages were captured so far in Raco region of Afrin province.