Turkey will not step back from Afrin operation, Erdoğan says 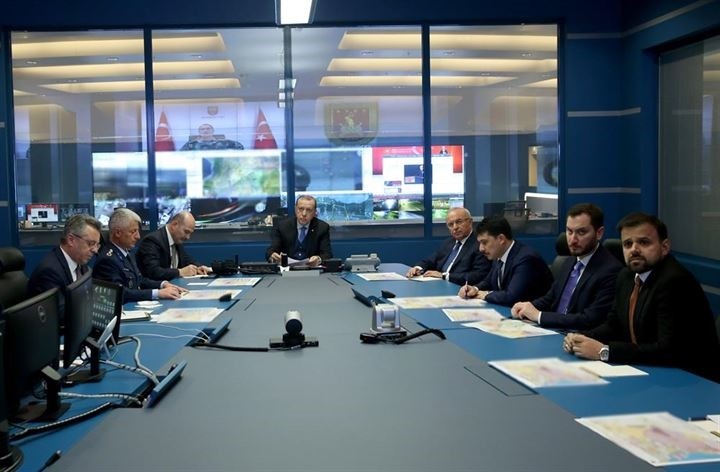 President Recep Tayyip Erdogan said Monday that Turkey would not step back from Operation Olive Branch until its goals are achieved and had an agreement with Russia regarding the operation.

"We will take control of Afrin, as we did in the Syrian towns of Jarabulus, al-Rai and al-Bab, and Syrians will be able to return home," the president said during a speech to businessmen in Ankara, saying that the operation is to continue with the coordination of Russia.

On Saturday, the Turkish military launched an operation in Syria's Afrin to clear its border of PKK's Syrian affiliates the Democratic Union Party (PYD) and its armed-wing, the People's Protection Units (YPG), presence to prevent them from establishing an autonomous region, which Turkish officials call a "terror corridor," by connecting the northwestern Afrin canton to the Kobani and Jazeera cantons in the northeast.

Erdoğan also retorted the U.S. statement that calls on Ankara to keep the military operation limited in scope and duration. "The Afrin operation will end when it achieves its goal, just as Operation Euphrates Shield. The U.S. said the duration should be limited. I've asked them: 'When is your duty in Afghanistan going to end? Does the time end in Iraq? You are still there'," the president said. He added that Turkey does not have an eye on any other country's land.

As Turkey recently launched an operation against terrorists' enclaves in Afrin, Syria with the aim of preventing the formation of a terror corridor along its borders, the prime minister accelerated the efforts to inform the opposition leaders about the details of the operation.

Yıldırım and Kılıçdaroğlu discussed the recent developments in a meeting at Çankaya Palace, which lasted over 45 minutes. The prime minister underlined that, "The aim of the operation is to maintain the territorial integrity and eliminate terror activities" and added that in the first assault over 170 targets were destroyed.

The CHP chair also stressed the significance of securing Turkey's borders. He stated that, "Operation Olive Branch has inevitably come to the agenda of Turkey."

The prime minister previously called Kılıçdaroğlu, who was in Germany, and relayed information about Operation Olive Branch.

U.S. State Department spokesperson Heather Nauert on Sunday urged Turkey to exercise restraint and ensure that its military operations remain limited in scope and duration. U.S. Defense Secretary Jim Mattis, on the other hand, said Sunday that, "Turkey has legitimate security concerns," noting it was the only NATO ally with an active insurgency inside its borders, pointing to PKK terrorists tied to the YPG.

Russian Foreign Minister Sergei Lavrov said yesterday that U.S. actions in Syria were either a "deliberate provocation" or indicated Washington lacked an understanding of the situation there, according to RIA Novosti news agency.

The U.S.-led coalition against Daesh said last week it was forming a 30,000-strong army based on YPG terrorists. However, after widespread criticism of the plan, especially from Turkey, the U.S. backtracked, claiming it was a misunderstanding. Lavrov called Washington's later denials "clumsy."

An official from the YPG criticized Russia's attitude over Operation Olive Branch, saying Moscow "betrayed Kurds" by pulling their soldiers from Afrin.

"Russia betrayed Rojava Kurds by letting Turkey enter Afrin," Sipan Hemo, a YPG commander said in an interview with Saudi-owned Asharq Al-Awsat newspaper. "Also, we don't need Russia's mediation in our communication with the [Bashar] Assad regime as we have a direct dialogue. They said Russia doesn't give permission to support us," he added.

Also, NATO Deputy Secretary General Rose Gottemoeller arrived in the capital Ankara Monday as part of her two-day official visit, according to a diplomatic source. Gottemoeller is set to hold meetings with Deputy Foreign Minister Ahmet Yildiz, Ministry Undersecretary Umit Yalcin and Deputy Undersecretary Kaan Esener, the source, who spoke on condition of anonymity due to restrictions on talking to the media, said.

According to local sources, the YPG has released all Daesh prisoners in Syria's Afrin on the condition that they fight against the Turkish military and the FSA, AA reported yesterday. It was not the first deal between two terrorist groups, as a BBC report released in mid-November revealed a secret deal between YPG-led Syrian Democratic Forces (SDF) and Daesh to help thousands of Syrian and foreign fighters and their families escape from Raqqa along with their weapons and ammunition to different parts of the country, including the Turkish border.

According to a statement released yesterday by th Russian Foreign Ministry, the Syrian National Dialogue Congress will be held on Jan. 29-30. The statement also says that Russian President Vladimir Putin does not plan to attend the congress.

Following Lavrov's remarks, the Turkish Foreign Ministry released a statement reiterating that the attendance of the PYD at the congress in Sochi is a red line for Ankara.