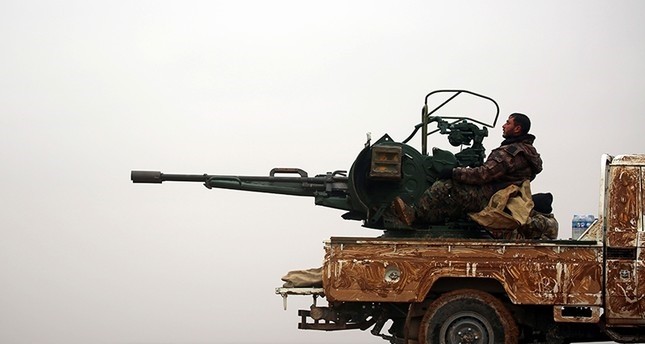 This file photo taken on December 13, 2016 shows fighters from the Syrian Democratic Forces siting on a heavily armed vehicle (AFP Photo)
by Daily Sabah Jan 23, 2018 12:00 am

The Peoples' Protection Units (YPG) militants who carry out military operations of any kind that are not specifically focused on the fight against Daesh will lose the U.S.-led coalition's support, the Pentagon said.

Speaking to Anadolu Agency on Tuesday, Pentagon spokesman Adrian Rankine-Galloway said any unit of the YPG in northeast Syria that moves to Afrin to join the fight against the Turkish military will no longer be partners of the coalition.

"If we observe scenarios in which that equipment is used for other purposes we are going to take appropriate action that could include cutting of military assistance to them," Galloway said.

White House Press Secretary Sarah Huckabee Sanders said Monday that they take Ankara's concerns over security seriously, but that the duration and scope of the operation should be limited. Meanwhile, Foreign Minister Mevlüt Çavuşoğlu announced that President Recep Tayyip Erdoğan and his U.S. counterpart Donal Trump will discuss the operation in a phone call on Wednesday.

U.S. Defense Secretary Jim Mattis said Turkey's ground and air offensive in northwestern Syria is a distraction from international efforts to ensure the defeat of Daesh. Mattis said it also risks worsening the humanitarian crisis there and in other parts of Syria. He said the U.S. sympathizes with Turkey's security concerns, adding that the violence in the Afrin region could be exploited by Daesh.

The U.S.'s cooperation with the YPG has been a thorny issue for Turkey. Ankara has repeatedly warned of the repercussions that will follow the use of one terrorist group to defeat another, while the U.S. has called the terrorist group a "reliable ally" in its fight against Daesh in Syria, even though its mother organization, the PKK, is listed as a terrorist group by Turkey, the U.S. and the EU.