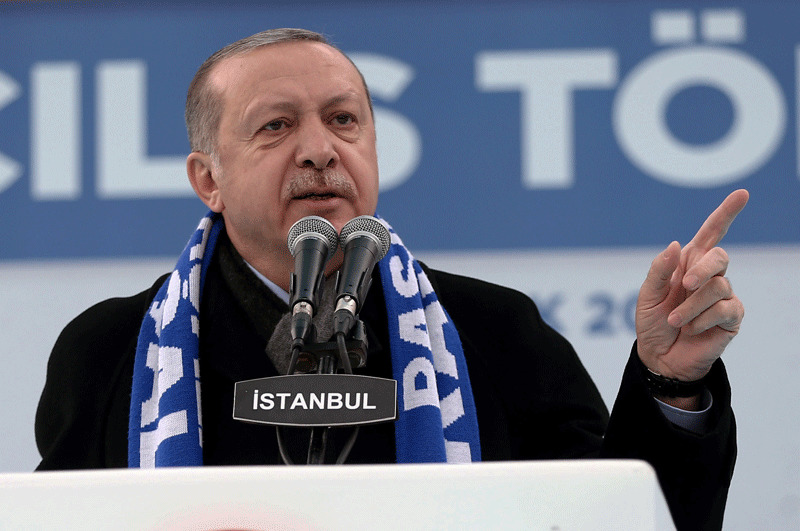 President Recep Tayyip Erdoğan said on Saturday that the Turkish Armed Forced will not show mercy to those who attack its freedom, referring to terrorist groups.

"We are not against any state, we only want to secure our future and liberty," Erdoğan told the opening ceremony of the Kasımpaşa- Hasköy Tunnel in Istanbul.

"We will embrace those who extend their friendly hand. We will break bread with those who ask for help," he added.

"We will also show no mercy to those who try to harm our future and freedom," Erdoğan said.

Erdoğan reiterated that the name of the terrorist group doesn't matter, whether it is called FETÖ, Daesh, the PKK, PYD, or YPG, as Turkey will "roll over all of them."

The PKK -- recognized as a terrorist group by the EU, U.S., and Turkey -- has waged a three-decade war against Turkey, taking 40,000 lives in the process. The PYD/PKK and YPG/PKK are its Syrian branches.

The Gülenist Terror Group (FETÖ) was behind the 2016 defeated coup in Turkey, which martyred 250 people and left 2,200 injured.

According to the Turkish General Staff, the operation aims to establish security and stability along the Turkish borders and the region as well as to protect the Syrian people from the oppression and cruelty of terrorists.

The operation is being carried out under the framework of Turkey's rights based on international law, UN Security Council resolutions, its self-defense rights under the UN Charter, and respect for Syria's territorial integrity, it said.

The military has also said that only terrorist targets are being destroyed and the "utmost importance" is being given to not harming any civilians.

Afrin has been a major hideout for the PYD/PKK since July 2012 when the Assad regime in Syria left the city to the terror group without a fight.