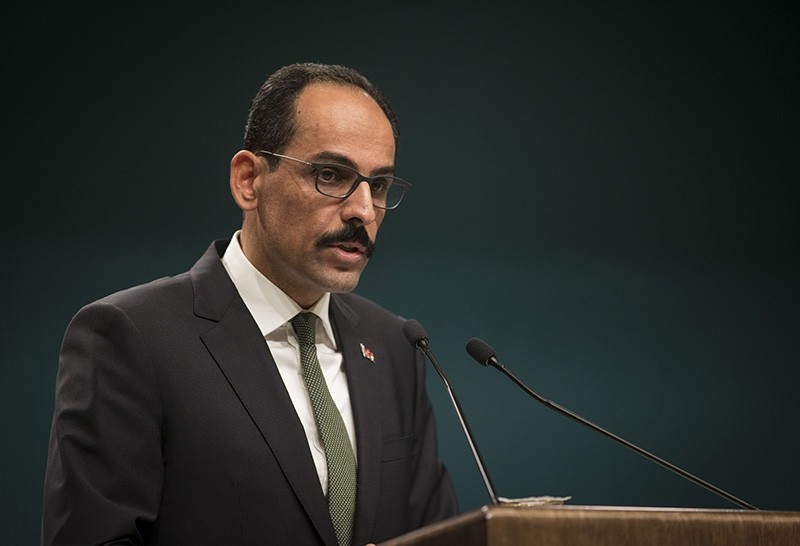 Speaking to foreign media reporters in Istanbul, Kalın said that the operation, which has entered its 15th day, is resuming as planned and so far, 20 small towns and villages, with 10 of them being significantly important, have been liberated.

Kalın stated that the operation has three main aims, which are clearing regions bordering Turkey from terrorist groups, clearing Syria from all terrorist groups in a larger prospect and maintaining the territorial integrity of Syria.

Clearing the Daesh terrorist group from the northern Syrian towns of Jarablous, al-Rai, Dabiq and al-Bab with Turkey's Operation Euphrates Shield has allowed 140,000 Syrian refugees to return to their homes, Kalın noted. He added that Turkey aims to do the same with Operation Olive Branch in Afrin by clearing PYD/PKK from the area.

Kalın said that U.S. support to the PKK/PYD/YPG has been a misguided policy, which can be observed from the overall positive international reactions and no questions about the legitimacy of Operation Olive Branch.

"Kurds have been under the oppression of YPG/PYD due to the American support," Kalın said, noting that hundreds of thousands of Kurds opposing the terrorist group have also been prevented to leave the areas controlled by the group.

"We have been telling our American allies to take action against the YPG threat for a long time. They didn't take measures, so we did. And it will continue as long as it is necessary," Kalın said.

He added that after the operation, locals in Afrin would be relocated to their towns and villages, just as it happened in areas liberated from Daesh with Operation Euphrates Shield.

Kalın said that Turkey carries out the operation with utmost care to avoid civilian casualties, but PKK's acting leader Murat Karayılan ordered from PKK headquarters in northern Iraq's Qandil Mountains that the terrorist group should step up propaganda of civilian casualties to tarnish Turkey's image globally.

"Turkish cities and towns are being targeted by PKK/YPG terrorists," he said, noting that while Turkish security forces are taking all necessary measure and immediately respond to such cases. He added, however, that Turkey can't respond to attacks in a spray-and-pray manner because the terrorists deliberately launch attacks from residential areas. "The ultimate way of stopping the attacks to Turkey will be to clear all the terror elements from our borders," he added.

"We are not expecting any refugee influx or mass movement from Afrin towards Turkey. And this shows success of operation. In contrast, We are expecting a move toward Afrin actually," Kalın said.

Regarding the Syrian National Dialogue Congress organized by Russia, Iran and Turkey in Russia's Black Sea resort of Sochi aimed at bringing together conflicting parties in Syria, Kalın said that the parties are still working on a political transition process.

He added that Sochi was successful in bridging the gap between Astana meetings and U.N. backed Geneva meetings, and said the presence of U.N. Syria Envoy Staffan De Mistura in Sochi assures Turkey that the meeting will be integrated under the U.N. umbrella.

Kalın said that the group of 150 formed for a new constitution could later be attended by parties who did not attend the congress, particularly the Syrian opposition that boycotted the congress over regime symbols.

He also commented on Turkey's role in monitoring the ceasefire process in opposition held Syrian province of Idlib, which has witnessed heavy clashes between opposition groups and the regime over the last week. Kalın said that Turkey will establish seven more monitoring posts in the region, in addition to already completed five posts, bringing the total number to 12.

Answering a question whether Turkish forces cooperate with al-Qaida linked Hayat Tahrir al-Sham (HTS) in Idlib, Kalın said that Turkey has no cooperation or communication with Daesh and al-Qaida linked groups anywhere.

He noted that there is no direct or indirect communication between Turkey and the Assad regime at any level.