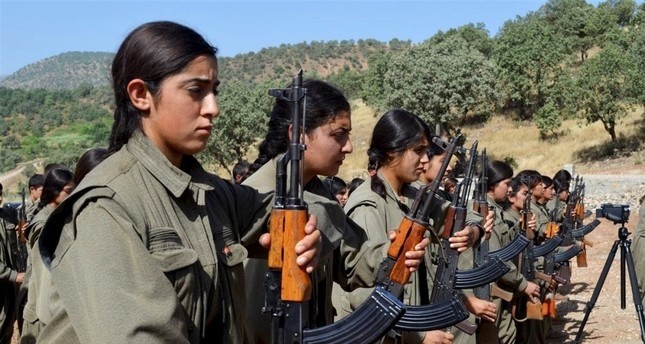 The Democratic Union Party (PYD) and its armed wing People's Protection Units (YPG) forcefully kidnap and recruit Assyrian, Kurdish and Arab children to fight for them and violate the rights of the local population, the president of the World Council of Arameans (Syriacs) said Monday.

"The YPG talks about democracy, human rights and free will, but they do not uphold these ideals and forcefully kidnap children from their families and arm them," Johnny Messo, a Dutch-Aramean politician who has been serving as president of the council since 2009, told Anadolu Agency.

Messo noted that the group openly lies to Assyrians and others about establishing a "true democracy" in the Middle East, but only a small group believes them because the rest of the people see their true face through their policies.

The PKK and its Syrian offshoots, the PYD and YPG, are both listed as terrorist groups by Turkey, while the U.S. and EU list the PKK as a terrorist group but do not consider the PYD as one, despite its above-mentioned terrorist acts.

The PKK and the YPG have a history of exploiting children and forcing them to become soldiers. Earlier in 2017, the YPG mandated conscription for all girls and boys over the age of 16 in the city of Manbij, located on the west banks of the Euphrates River. The Yazidis, a regional minority group, have also suffered from oppressive acts at the hands of the PKK and the Democratic Union Party (PYD).

A report titled, "The Forcible Recruitment and Deployment of Child Soldiers by the Democratic Union Party in Syria," states that in addition to adults being forcibly conscripted by the PYD to serve for its armed wing the YPG, there has also been an increase in the recruitment of children as young as 12 years of age.

A report by the Human Rights Watch (HRW) had also documented recruitment of children by PKK's Iraqi offshoots, the People's Defense Forces (HPG) and the Shingal Resistance Units (YBŞ).

The politician also highlighted the fact that people living in northern Syria are afraid to explain what they have been going through in the past few years, and many have left the area as a result of pressure by the YPG.

"The Assyrians see no future there for themselves anymore," Messo said.

Messo also criticized Western media outlets for whitewashing the YPG, and concealing its true face, disregarding the concerns of many oppressed by the terrorist group.

"What we want to tell the world does not conform to what Western media outlets want to portray [about the YPG]," Messo said, adding that the YPG occupies land and only works for the group's own benefit.

"Their interests do not respect the interests of the people of Syria. YPG poses a great threat and risk to the people and minorities living in the region as it seeks its own interests" Messo said.

The Assyrian leader noted that Turkey reacts to the YPG's actions because it truly wants peace in Syria and the protection of its neighbor's territorial integrity and does not want a "Kurdistan buffer zone" across its borders.