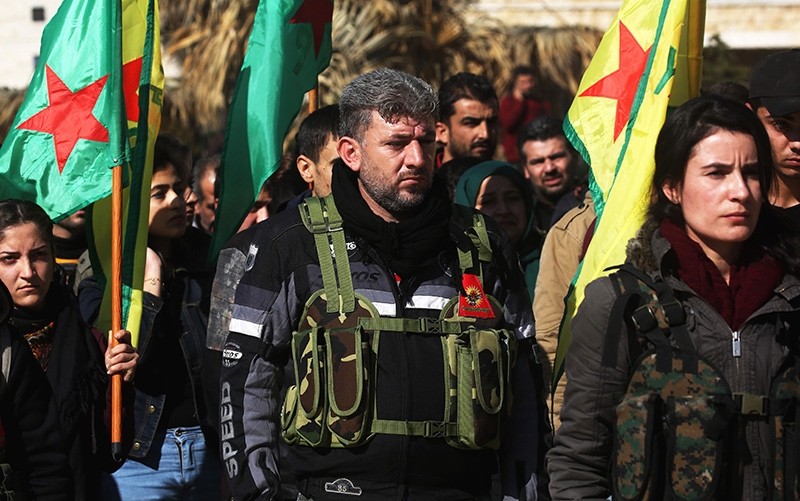 Last week, the terrorist group announced plans to arrange a "civilian solidarity convoy" from YPG-held parts of northern Syria to Afrin, where Turkish troops are now deployed within the framework of Operation Olive Branch.

The sources, whose names have been withheld due to security concerns, said that numerous individuals had left the YPG-held Qamishli, Darbasiyah, Malikiya, Hasakah and Kathaniya settlements on Monday for Kobani near Syria's border with Turkey.

Comprised of hundreds of cars and buses, their convoy joined other vehicles waiting at Kobani before moving into Afrin late Monday night.

According to reliable sources in Afrin, a number of those in the convoy were volunteers. A significant portion of others, however, were civil servants and students forced by the YPG to take part in the exercise.

Late last month, the YPG organized several demonstrations under the banner of "Solidarity with Afrin," in which civil servants and students were forced to participate, while shops in the area were forced to temporarily close their doors.

Meanwhile, Pentagon spokesperson Eric Pahon has said that the U.S. does not support YPG units who leave anti-Daesh operations to fight Turkish troops in Afrin, making a distinction between the US-backed Syrian Democratic Forces (SDF) and its composite parts, including the YPG.

"Those forces [SDF, PYD, YPG] are more like a loose federation than say the U.S. army. They are a federation fighting under one command and one cause. If pieces of that fracture [and] move out, we are not cutting our support for the SDF as a whole, it will be those individual pieces," Pahon said in his interview that was published on Hürriyet Daily News on Tuesday while adding that US support for the SDF is limited to anti-Daesh operations and does not include resistance against Turkey.

"We cooperate with those units that are working to defeat Daesh. The units that have moved out or moved to Afrin are not U.S.-supported units," Pahon stated, though still adding that YPG terrorists are defending their home against Turkish forces.

The U.S.'s cooperation with the PKK-affiliated YPG has been a thorny issue for Turkey. Ankara has repeatedly warned against the repercussions of using one terrorist group to defeat another, while the U.S. has been touting the "effective results" of its cooperation with the YPG in the fight against Daesh. However, although the fight against Daesh has almost ended, the U.S. still continue to support the YPG with arms and military equipment.

Meanwhile on Jan. 21, the Assad regime allowed YPG terrorists in Aleppo to use regime-held roads to send arms deliveries to Afrin.