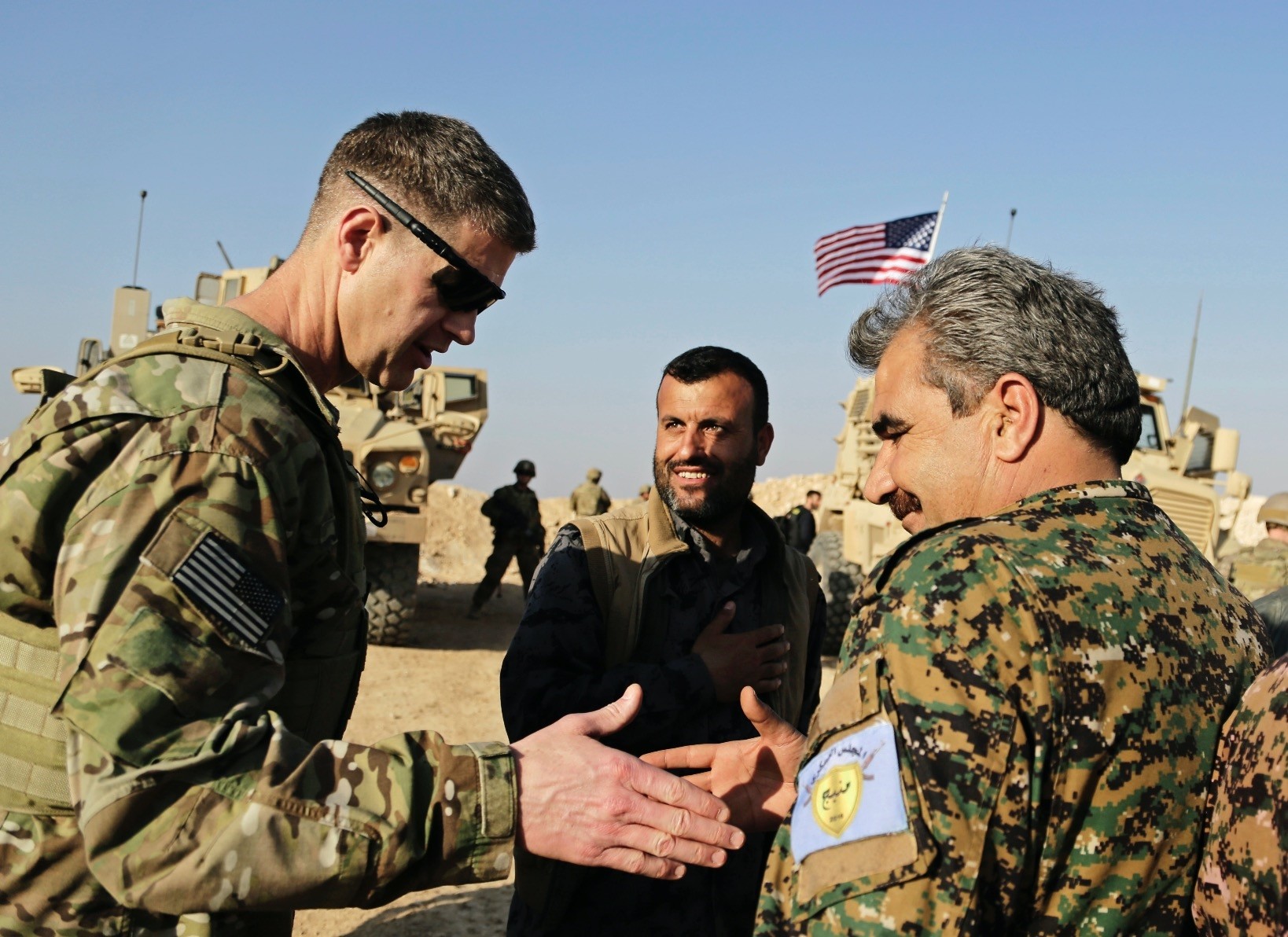 U.S. Army Maj. Gen. Jamie Jarrard (L), thanks the Manbij Military Council, which consists of YPG terrorists, including commander Muhammed Abu Adeel, during a visit to a small outpost near the town of Manbij, northern Syria, Feb. 7.
by Daily Sabah with Agencies Feb 09, 2018 12:00 am

The U.S. has threatened Turkish forces if they continue Operation Olive Branch on to Manbij, backing the YPG terrorists that control the down instead of its NATO ally

The U.S. continues to insist on its stance over Manbij, threating Turkey with retaliation against any operation in the city to sweep out PKK-affiliated groups. The tense situation may end up causing a new low in the two countries' already strained relations.

On Wednesday, U.S. Lt. Gen. Paul E. Funk paid a visit to U.S. forces in Manbij, saying the U.S. would continue to support Syrian Democratic Forces' (SDF) allies, despite tensions with Turkey and that a continued U.S. presence in Syria's north is aimed at deescalating tensions, implying that the U.S. may fight against Turkey in Manbij in case of a possible operation.

Turkish officials have consistently noted that Operation Olive Branch will continue in Manbij and have criticized the U.S. for not keeping its promises in terms of the pledge given by the U.S. that local councils would run the cities after they were liberated, but the PKK and its Syrian affiliate, the Democratic Union Party (PYD), took control in northern Syria. 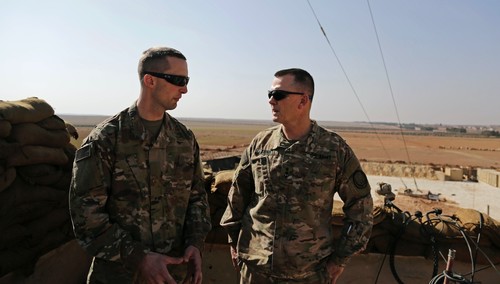 "I don't worry," Funk said when asked about Turkey's claim to move toward Manbij, "It's not in my job description to worry. My job is to fight."

On Tuesday, President Recep Tayyip Erdoğan called on the U.S. to withdraw its troops from Manbij and said what Turkey sees as terrorists, the U.S. sees as heros, referring to the PKK's Syrian affiliate, the People's Protection Units (YPG) that have controlled the town since 2016.

Since the ousting of Daesh from the town, the U.S. has maintained a military presence there and regularly conducts patrols in the area, reflecting the deepening American involvement in Syria.

The president reiterated once again that Turkey will go there to liberate the city from terrorists and return it to its rightful owners, who are mainly Syrians. He highlighted that Turkey does not have any occupation intentions, unlike the U.S., which has been in Afghanistan and Iraq for over 15 years.

"Why does the U.S. continue to send weapons to northern Syria even after Daesh was cleared? Why are you still here? Why are these [weapons] still being delivered? You must have calculations against Turkey, Iran or maybe Russia," he added.

Last month, U.S. Secretary of State Rex Tillerson said the U.S. would maintain a military presence in Syria after the conclusion of the fight against Daesh there, pledging that the Donald Trump administration would not to repeat former U.S. President Barack Obama's "mistake" when he withdrew U.S. troops from Iraq in 2011. "Right now the military role is clearly defined and right, now that's to support the SDF," said Army Maj. Gen. James Jarrard, who gathered with other American troops and c

ommanders at the Manbij outpost.

"I think looking at the very beginning of the U.S. relationship with the YPG and what's happening right now, a really serious deterioration in American-Turkish relations was completely inevitable," Charles Lister, a senior fellow and director of the Extremism and Counterterrorism Program at the Middle East Institute, said Wednesday.

"I do think the American government has put itself in a pretty tricky situation," Lister added while indicating that in his opinion, if Turkey feels like it is being abandoned by NATO and the U.S., it will "of course seek out other relationships, and the most obvious one in northern Syria is the Russian government."

Previously, the U.S. administration under Obama had prom

ised Turkey that YPG terrorists would move east of the Euphrates. However, despite warnings from Ankara, the promises were not kept, and the YPG did not end up moving east.

The YPG's ultimate aim is to establish an autonomous region in northern Syria by connecting the northwestern Afrin canton to the Kobani and Jazeera cantons in the northeast, which is considered a "terror corridor" by the Turkish government. As a result of the U.S.' broken promises, Turkey also shifted its position and vowed to clear all terrorists from northern Syria, including Manbij and the eastern parts of the Euphrates.

Meanwhile, U.S. National Security Advisor H.R. McMaster is expected to visit Turkey over the weekend, while Tillerson will come next week, Turkish diplomatic sources confirmed on Tuesday in order to discuss Operation Olive