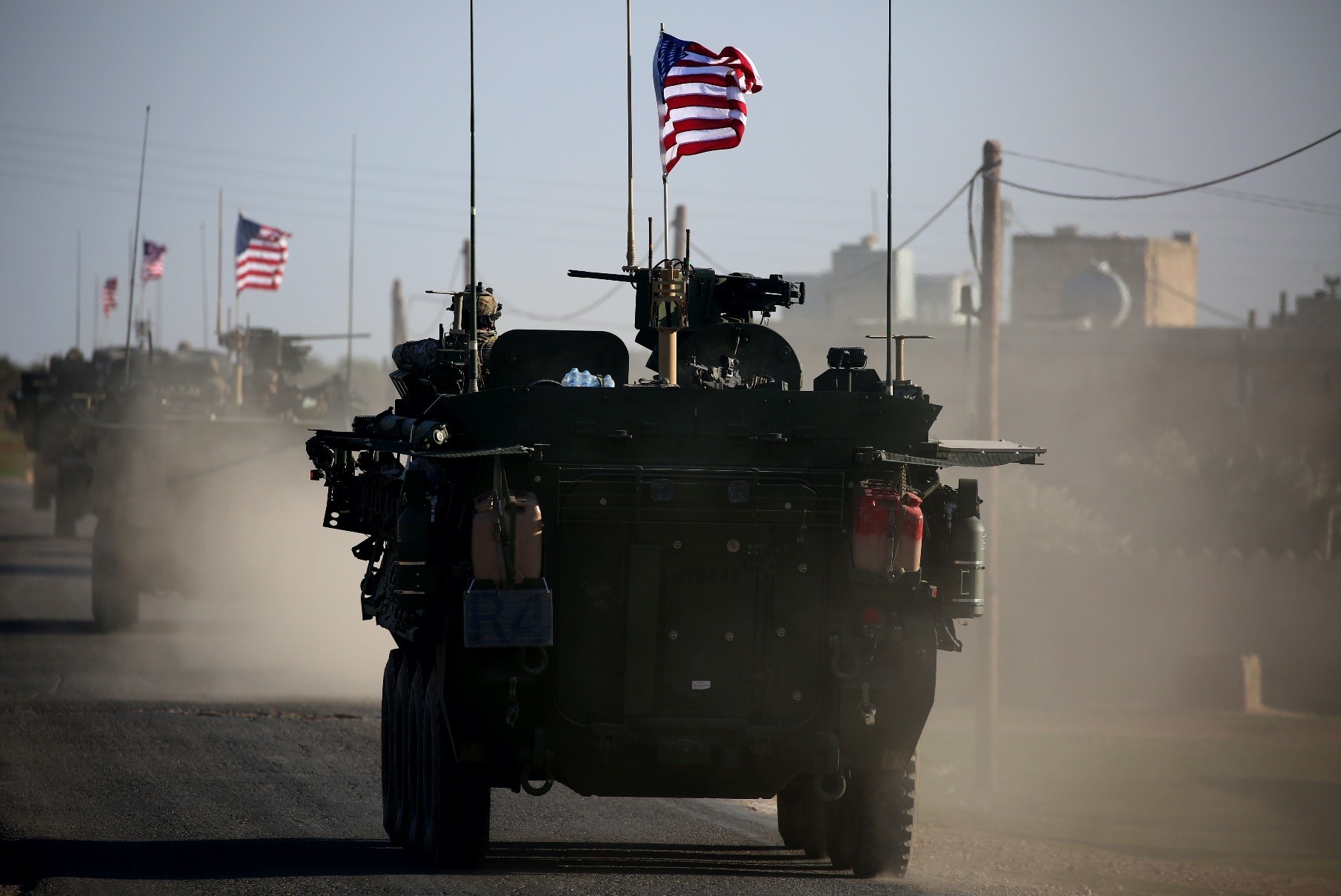 A US military vehicle= drives near the village of Yalanli, on the western outskirts of the northern Syrian city of Manbij, on March 5, 2017.
by Şeyma Nazlı Gürbüz, Mehmet Çelik Feb 10, 2018 12:00 am

Turkish-U.S. relations are at a critical point due to disagreements over the northern Syrian city of Manbij, which is under the control of the PKK's U.S.-backed Syrian affiliate, the Democratic Union Party's (PYD) armed People's Protection Units (YPG) militia. While Ankara is determined to launch an operation on Manbij following Operation Olive Branch in Afrin to clear the city of terrorist elements, U.S. military officials have said that if Turkish forces move on Manbij, they would not hesitate to return fire if attacked.

"Turkey aims to carry its military success to the diplomatic area, since in the Middle East today, it is not possible to be diplomatically successful unless you have military power. Thus, Turkey risks confrontation with the U.S. … no matter what," said Nurşin Ateşoğlu Güney, dean of the Economic, Administrative and Social Sciences Faculty at Bahçeşehir Cyprus University, She added that Turkey's demand the U.S. is clear; the removal of the PYD and YPG from northern Syria.

According to Güney, Turkey's fast improvements in Operation Olive Branch in Afrin and a meeting in Istanbul as a continuation to the Sochi summit has led the U.S. to reconsider its relations with Turkey. "It was first considering that it can deal with Turkey's stance on the PKK and its Syrian affiliates somehow. However, with Operation Olive Branch, it realized that it can no longer continue like this. Thus, I believe that with the visits of both [National Security Adviser H.R.] McMaster and [Secretary of State Rex] Tillerson, the U.S. will try to evaluate the situation and convince Turkey to come up with a middle ground," Güney said.

She added that there could be a surprise regarding Manbij, a solution which was initially not expected.

U.S. National Security Advisor H.R. McMaster is expected to visit Turkey over the weekend, while Secretary of State Rex Tillerson will come next week, Turkish diplomatic sources confirmed Tuesday. The sources also said that Tillerson will meet with his Turkish counterpart, Mevlüt Çavuşoğlu, in Ankara.

On his visit to the U.S. forces in Manbij, U.S. Lt. Gen. Paul E. Funk said on Wednesday that the U.S. will continue to support the Syrian Democratic Forces (SDF), which is largely dominated by the YPG, despite tensions with Ankara, explaining that the U.S. would return fire if Turkey attacks U.S. forces and their assets in Manbij. "Right now, the military role is clearly defined, and right now, that's to support the SDF," said Army Maj. Gen. James Jarrard, who met with U.S. troops and commanders at the Manbij outpost. Turkish officials have already repeatedly said Operation Olive Branch, which was launched on Jan. 20 to clear YPG terrorists in Afrin, will continue on to Manbij. Ankara has criticized the U.S. for failing to keep its promises in terms of the pledge that local councils would run the cities after they were liberated, but the PYD, has taken control in northern Syria.

"I believe that the U.S. may step back just like Russia did in Afrin by moving toward Tel Rifat," Güney said, emphasizing that if they cannot find a middle ground, relations will hit rock bottom.

The YPG's ultimate aim is to establish an autonomous region in northern Syria by connecting the PYD's northwestern Afrin canton to the Kobani and Jazeera cantons in the northeast, which Ankara considers to be a "terror corridor." As a result of the U.S.'s broken promises, Turkey also shifted its position and vowed to clear all terrorists from northern Syria, including Manbij and areas east of the Euphrates.

However, in terms of threatening remarks from the U.S., Mete Yarar, a security expert who is also a former member of the Turkish Armed Forces (TSK), said that until now, U.S. officials have never said that if Turkey attacks the YPG it would hit back.

"They said that if Tukey attacks U.S. soldiers, then they would respond with retaliation. This is an important point to remember," Yarar said, adding that U.S. would not fight for the YPG against Turkey, a NATO ally.

Last month, Tillerson said that the U.S. would maintain military presence in Syria after the conclusion of the fight against Daesh. Despite warnings from Ankara, the promises that were given by former President Barack Obama's administration, claiming that the YPG would move east of the Euphrates, the YPG did not move east.

Turkish-U.S. relations have suffered due to the YPG, since Obama's presidency, during which U.S. military support to the YPG began. Current President Donald Trump has followed suit in Syria by arming the YPG, a stance Ankara had hoped would change with the new administration.

James Jeffrey, the U.S. ambassador to Turkey from 2008 to 2010, who is now with the Washington Institute, has said that U.S.

National Security Advisor H.R. McMaster's expected visit to Ankara is an opportunity to mend strained ties over some issues with Washington.

"I am optimistic that the McMaster visit can solve the specific issues between Turkey and the U.S.," the former diplomat said.

On the dispute over Manbij, Jeffrey said: "The specific issue of Manbij is complicated. It has no strategic significance to either side, but for Turkey it represents promises made and not kept by the U.S., and PYD [Democratic Union Party] control over a largely Arab population."

He added that Manbij is an area where the U.S. can maintain its presence as it believes is "critical to preventing a return of Daesh and, more importantly, countering the potential Russian-Iranian-Assad dominance of the Levant."

While Jeffrey said that the U.S. will not "simply pull back whenever anyone tells it to leave any area," to address Ankara's concerns, the U.S. can "halt shipments of weapons to the SDF [Syrian Democratic Forces] –already cut off from the YPG – thin out the Kurdish military presence west of the Euphrates, cooperate with Turkey with population there and stop fawning public events with YPG and PYD leaders [Abdullah] Öcalan."

Jeffrey suggested in an email to Daily Sabah that there are several options in northern Syria that must be considered by decision makers in Ankara. "(1) Wage a war to destroy those militias and occupy the territory—the biggest military challenge for Turkey since 1922, opening the door for outside actors to act against Turkey and provoke possible unrest within Turkey. (2) Leave the region to its current leaders – PYD – and risk long term border warfare. (3) Iran and Assad form an alliance with PYD and use it as proxy against Turkey. (4) Have U.S. remain in this area, ensure no one threatens Turkey out of it or receives heavy weapons (which Assad and or Iranians would likely provide PYD) and coordinate goals of presence with Turkey."

Jeffrey suggest "If Turkey accepts (4) as 'least bad' then there is a path forward for the U.S. and Turkey to coordinate Syria policy to keep PYD from threatening Turkey. Daesh from returning, and to "encourage" Russia and to some degree Iran and Assad to compromise in Geneva if they want an end to conflict In Syria."

Adding to the disagreements over supporting the YPG, the dispute over the YPG is expected to bring the already strained ties to a historic low between the two NATO allies if a diplomatic solution is not found.