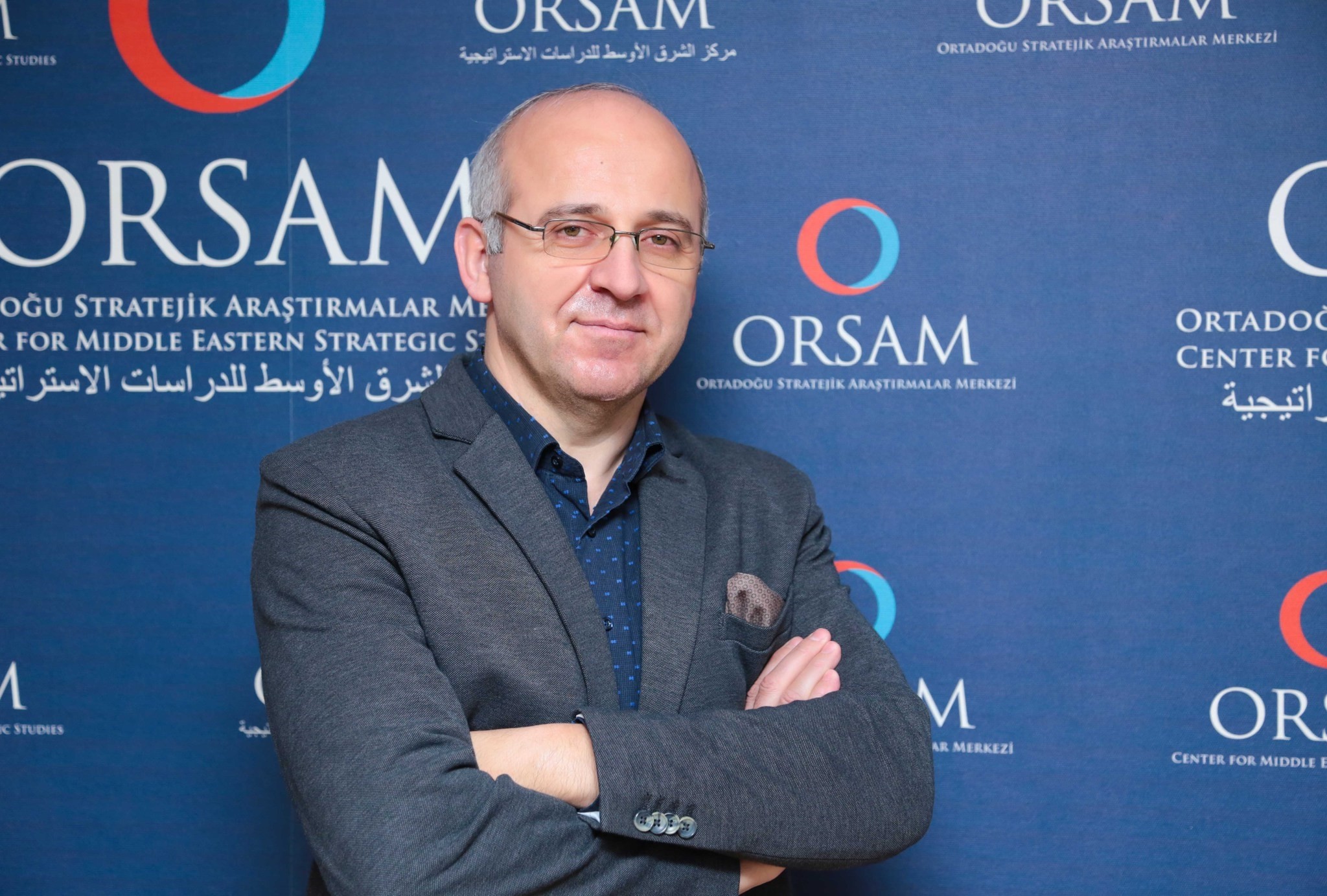 Professor Ahmet Uysal said that a third way might be found between Turkey and the US regarding the PYDu2019s withdrawal from Manbij despite the recent u201cbattle of nervesu201d between the two countries over the issue.
by Ali Ünal Feb 12, 2018 12:00 am

The Turkish military and FSA prudently act to avoid civilian casualties and diminish military losses in Operation Olive Branch, which ‘has prevented the creation of a PKK state that has access to the Mediterranean,' the ORSAM chair said, adding that he believes the tensions between Turkey and the U.S. will subside before escalating into a serious conflict

It has been three weeks since Turkey launched Operation Olive Branch (OOB) to eradicate the PKK's Syrian affiliate, the Democratic Union Party (PYD), and Daesh from its southern border. Stating that the operation is a success so far, Middle East Strategic Research Center (ORSAM) Chair Professor Ahmet Uysal said the Turkish military is moving cautiously to minimize casualties and prevent collateral damage. Uysal asserted that the OOB is preventing the PKK from establishing a state that borders the Mediterranean Sea and reminded that the PKK wants to access the sea through Idlib. He said the statements made about targeting Idlib after Afrin is not a change in strategy, but a move to prevent this scenario from happening. 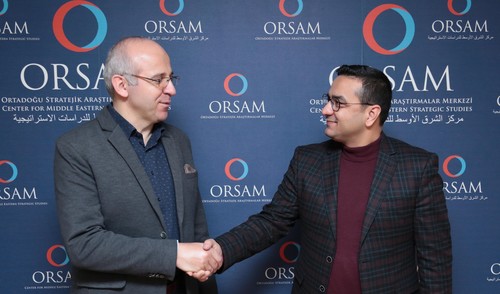 Asserting that there is a battle of nerves between Turkey and the U.S. over the PYD's withdrawal from Manbij and the support provided to the terrorist organization, Uysal believes that a third way might be found during the U.S. Secretary of the State Rex Tillerson's visit to Turkey to prevent conflict between the two parties, despite all the issues between Turkey and the U.S.

Uysal underscored that Turkey would no longer be a part of NATO and the Western alliance if the U.S. risks conflict with Turkey to protect the PYD. According to Uysal, Turkey becoming a country synchronous with Russia and China would impact not only regional but also world politics, and the U.S. does not want to take this risk.

Daily Sabah: It has been almost a month since Operation Olive Branch was launched. How do you evaluate this operation in terms of gains on the field and impact on regional politics?

Ahmet Uysal: First, I would like to remind the aim of the operation. Turkey launched the OOB to cleanse the country's southern border of the PKK and its Syrian affiliate PYD, as well as Daesh. There is a project that aims to cut Turkey's connection with the Middle East through the establishment of a PKK state on the south. The plan to establish a PKK state that borders with Turkey on the south and has access to the Mediterranean Sea will be thwarted through this operation. The aim is to also collapse the PKK's project mentally. This is why Afrin is critical. Once Afrin is captured, the PKK's projects, including the formation of a state that has access to the Mediterranean Sea, will become obsolete.

Considering how the operation is progressing, we can see that both the Turkish Armed Forces (TSK) and the Free Syrian Army (FSA) is moving slowly but steadily to avoid risking their lives as well as that of civilians. Otherwise, Turkey would have already captured Afrin, had it had employed a heavy bombardment strategy like Russia in Aleppo or the U.S. in Raqqa, which disregarded civilian lives. However, this is not the aim.

Meanwhile, looking at the gains made in the first 20 days, we can see that Turkey has neutralized over 1,000 PKK-PYD militants and liberated a prominent swathe of land. I believe the TSK and FSA will move much faster once they have taken control of the mountainous region on the border.

The timing of the operation is also important. If Turkey had launched the operation while the offensive against Daesh was ongoing, Turkey would have been accused of undermining the efforts against Daesh. However, as Daesh is defeated, this accusation is no longer a possibility.

DS: While it was being speculated that the second target after Afrin would be Manbij, President Recep Tayyip Erdoğan announced it would be Idlib instead. What is your take on this statement? Is Turkey changing strategy?

AU: This does not mean a change in strategy. Idlib is one of the no-conflict zones established during the Astana summits led by Turkey, Russia and Iran. Moreover, it was decided in these summits that Turkey would establish checkpoints to the north of the city. Yet, it was not possible to establish all the checkpoints there. This statement indicates that Turkey prioritizes the establishment of these checkpoints in Idlib after liberating Afrin.

In an article I wrote recently, I was discussing whether Afrin or Idlib should be the priority target of an operation. I believe Idlib would have been more appropriate. If we are discussing that one of Turkey's aims is to prevent the PKK-PYD from establishing a corridor on the south of Turkey and has access to the Mediterranean, this access point will be Idlib. Therefore, to thwart the PKK's plan, you need to block the exit. They are already in Afrin, so we should prevent them from going any further. Establishing checkpoints in Idlib would prevent terrorists from achieving their goals.

DS: Turkey expressed its determination to cleanse terrorist elements from its southern border. It is expected that the operation will eventually move on to Manbij. As Manbij is occupied by PYD militants and U.S. soldiers, there are questions about whether Turkey and the U.S. will engage in a conflict. How do you evaluate this?

AU: There is a significant battle of nerves between Turkey and the U.S. Yet, I do not think that this will evolve into an armed conflict involving the two countries' militaries. If the U.S. wants to be effective in the region, it cannot do this without the support of a country like Turkey. Russia has realized this. Russia gained ground in Syria, however, without Turkey's constructive and mending power, it is not possible to achieve permanent peace and stability in Syria. For this reason, Russia cares about Turkey's support. If the U.S. wants to establish order and stability in both Syria and Iraq, it needs Turkey. In this respect, I believe tensions between the U.S. and Turkey will subside before escalating into an armed conflict.

In addition, there is also a strategic aspect. If the U.S. risks conflict with Turkey to protect the PYD, Turkey can no longer be a part of NATO and the Western alliance. Turkey becoming synchronous with Russia and China would have an impact not only on regional politics but also world politics. Would the U.S. antagonize Turkey to support the PKK in Manbij, forcing Turkey to change camps? I do not think so. For this reason, I believe this issue will eventually be resolved.

I believe the U.S. will back down in Manbij, however, it may be escalating tensions for a compromise.

DS: In this respect, how do you see U.S. Secretary of the State Tillerson and National Security Adviser McMaster's visit?

Rex Tillerson and the U.S. Department of State are mostly aware of Turkey's importance. I believe U.S. President Donald Trump is also aware of this, however, there are certain cliques in the Pentagon. These cliques, including the military wing, the gun lobby and those who want the conflict to continue are ill-intentioned. This began during former U.S. President Barack Obama's administration. They continue to aid the PYD and do not heed the Department of State. The Pentagon announced that they would establish a 30,000-personnel border unit comprised of the PYD; then, they were forced to withdraw this statement. Immediately after this incident, Tillerson proposed a 30-kilometer-deep safe zone to Turkey. These indicate that there is a serious disparity between the Pentagon and the Department of State.

It seems that Tillerson will call for moderation regarding the Afrin operation during his visit. He will ask Turkey to either limit or halt the operation. However, Turkey is determined to conclude the operation. I believe a common ground will be found through negotiations between the two countries without resorting to armed conflict.

DS: What is your take on the post-referendum process in Iraq? Do you believe the crisis that emerged as a result of the Kurdistan Regional Government's (KRG) referendum decision is resolved?

I don't think so. The crisis is still there. At first, they left the decision to the Iraqi Parliament, not clearly stating they have invalidated the referendum. This has created concern. Even though it is impossible for them to declare independence, they are using it as a trump card. Turkey, Iran and Iraq are reacting to it as they are against the referendum. Masoud Barzani claimed he was taking a step back, however, he still continues to direct northern Iraqi politics, despite sharing his authority. There is an ongoing struggle. Unfortunately, the referendum triggered a nationalistic notion among Kurds, while the embargo on the region, courtesy of the very same referendum, started to deteriorate the economy. Some are pondering whether they have something wrong, while others accuse other powers of wrongdoing. In this respect, the struggle continues.

DS: Meanwhile, Iran expressed concerns about OOB and stated that it should be suspended. How do you evaluate Iran's statements?

This has two dimensions. The first is regarding Syria. Iran wants to revert Syria to pre-2011 settings almost with a push of a button as if nothing happened. Iran knows this is not the reality, but acts like it is. They claim no one should enter Syria without Iran and Bashar Assad's approval. Yet, Assad is not able to control his own country. It seems irrational, but the whole point of this discourse is to prevent Assad from losing his hold on Syria further.

Second, Iran has issues with its Kurdish citizens. The most prominent protests after Barzani's referendum were those by Iranian Kurds. Moreover, during Iranian protests, the predominantly Kurdish regions were the most active. As Iran is not as developed or as democratic as Turkey, the reactions of Iranian Kurds toward the regime are rather harsh. I believe Iran is trying to redirect the Iranian Kurds' frustrations toward Turkey, creating a discourse that Kurds should be angry with Turkey, not Iran. An Iranian Kurdish deputy slandered Turkey and its president. If a Turkish deputy had made the same remarks, Iran would have overreacted, however, Iran itself allows this in its media and political domain. Moreover, Iranian media always fabricate news about Turkey. They have even published a farcical news article about Turkey using chemical weapons in Syria through an official news broadcast. Through fabrication and disinformation, Iran is trying to reflect Iranian Kurds' frustrations to Turkey.