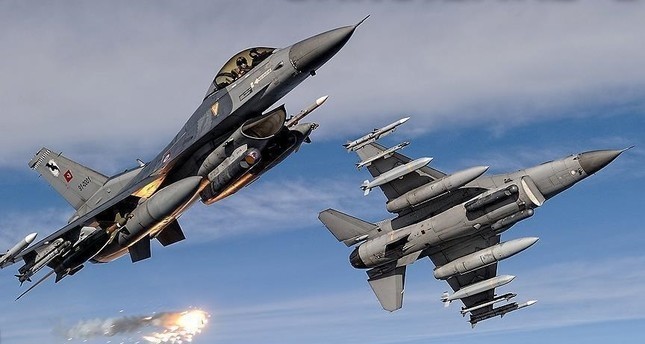 According to the sources, a total of 16 targets were hit during the anti-terror operation, and the warplanes have returned to their bases in safety.

Meanwhile, the Turkish Armed Forces (TSK) and the Free Syrian Army (FSA) continued to advance on several fronts in Syria's Afrin. The TSK said Monday in a statement that at least 1,439 terrorists have been neutralized since the beginning of Operation Olive Branch launched against the PKK terror group's Syrian branch the People's Protection Units (YPG) and Daesh terrorists in Afrin. Turkish jets carried out airstrikes overnight, neutralizing 70 terrorists, the statement said.

On Jan. 20, Turkey launched the operation to prevent a "terror corridor" from forming along its border.

Afrin -- a region bordering Turkey's southern Hatay and Kilis provinces –has been controlled by the YPG/PKK terrorist group since 2012, when Syrian regime forces withdrew from the area.

The PKK, which is listed as a terrorist organization by Turkey, the U.S., and the EU, waged a terror campaign against Turkey for more than 30 years, killing nearly 40,000 people.