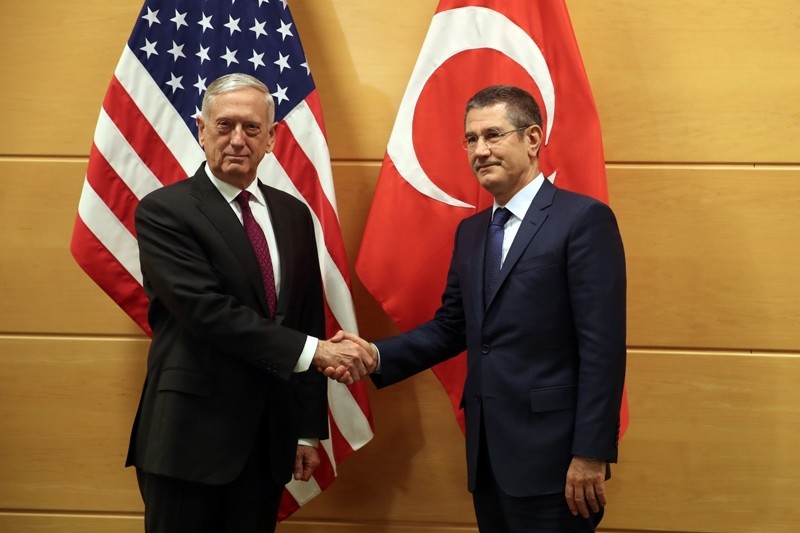 Making a televised statement from Brussels, Canikli said operations against Daesh in Syria's al-Bab and the Euphrates Shield showed Turkey's resolve to fight the terror group.

"We told [the U.S] that our Operation Olive branch will not harm the fight with Daesh and will not distract us. I pointed out that we're carrying out an effective struggle," the defense minister said, adding that he also relayed the YPG was working closely with Daesh and was trying to use some of its elements against Turkey.

Canikli also said he urged Mattis to end the U.S. support for the YPG in Syria.

"We pointed out that U.S. support for PYD/YPG terrorists strengthens PKK terrorists, which constitutes a national security threat to Turkey. We conveyed our determination and expectations from the U.S. to cut all of its links with the YPG and remove them from the ranks of the SDF," added.

Mattis, in turn, said the U.S. was working on a plan to recover arms from the YPG, especially heavy weapons.

According to Canikli, Mattis said the U.S. can make the PKK and the YPG — which are both parts of the same terrorist network — fight each other, proposing a dead-end strategy.

Speaking after Canikli's statement in a news conference, Mattis said there were some issues the U.S. and Turkey disagreed on, but both countries kept all the communication channels open, adding that talks between Washington and Ankara were based on "honesty and transparency."

Canikli and Mattis held a 50-minute long meeting at the NATO headquarters in Brussels on Wednesday.

Both defense chiefs arrived in the Belgian capital to attend NATO Ministers of Defense meetings.

U.S. Secretary of State Rex Tillerson is expected to arrive in Turkey on Thursday to hold talks on the PKK crisis in Syria between Ankara and Washington.