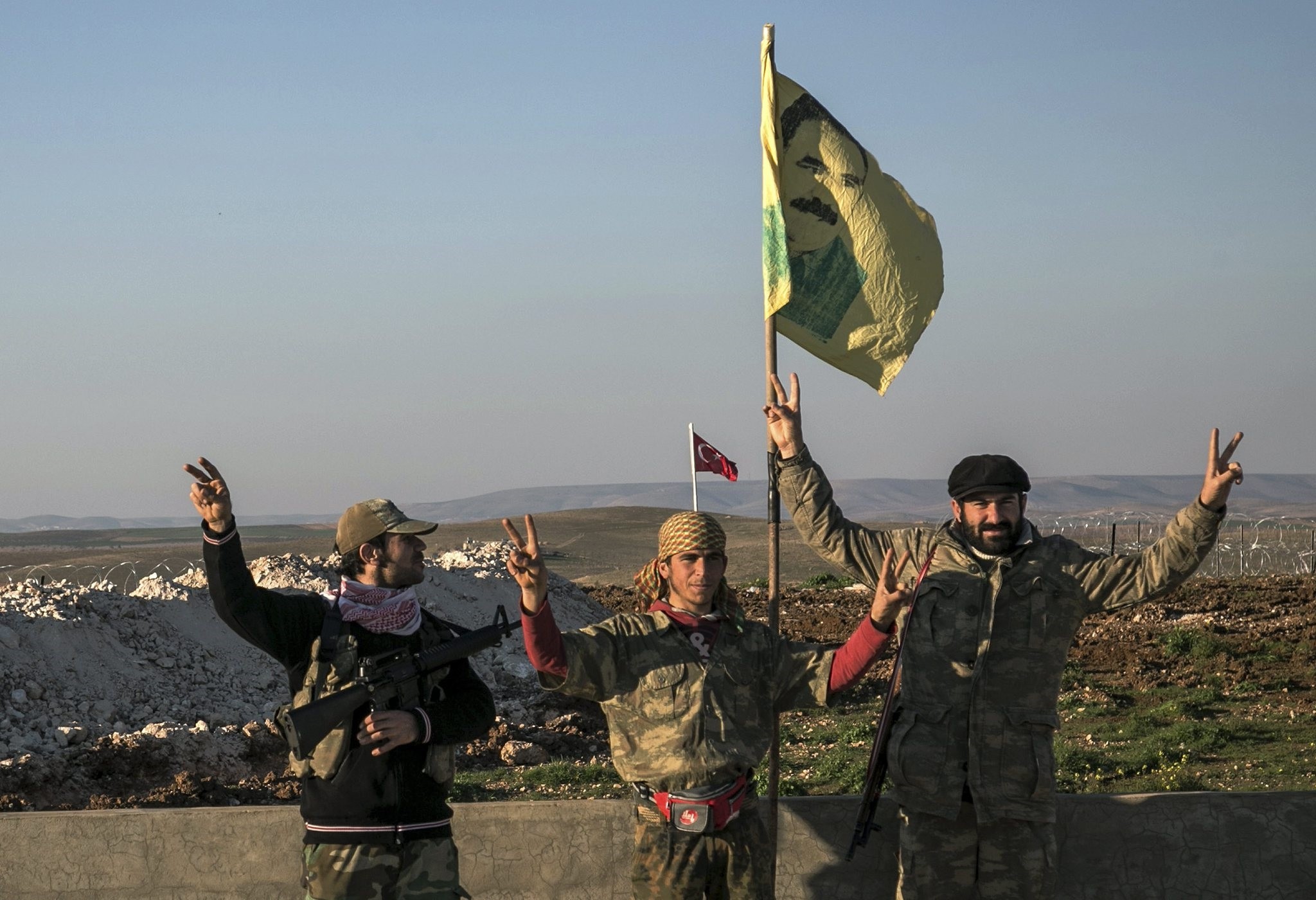 YPG terrorists pose with a banner with a picture of imprisoned PKK leader Abdullah u00d6calan.
by Mehmet Solmaz Feb 15, 2018 12:00 am

In a meeting at NATO Headquarters in Brussels yesterday, U.S. Defense Minister Mattis made an odd suggestion to his Turkish counterpart that the U.S. could seperate the PKK and YPG and make them fight each other

Defense Minister Nurettin Canikli said U.S. Secretary of Defense James Mattis told him that the United States could separate the People's Protection Units (YPG) from the PKK "and even try to make them fight the PKK."

Speaking to reporters at a televised press conference before departing from NATO headquarters in Brussels yesterday, Canikli said that the proposal does not make sense since the YPG is affiliated with the PKK. "They share the same goal and are controlled from the same place," he said regarding the YPG, which dedicated the success of the Raqqa operation to imprisoned PKK leader Abdullah Öcalan with a huge poster of him in the heart of the city.

"We pointed out that U.S. support for YPG terrorists strengthens PKK terrorists, which constitutes a national security threat for Turkey. We conveyed our determination and expectations from the U.S. to cut all of its links with the YPG and remove them from the ranks of the SDF," Canikli said.

Canikli and Mattis, who first met in Rome a day before the two-day NATO meeting, will also be joining the 54th Munich Security Conference today.

The meeting in Brussels came amid continuing tension between Ankara and Washington over the U.S. allying with the YPG, while Turkey is targeting the same terrorist group in its Operation Olive Branch in Afrin, Syria, across Turkey's southern border.

Canikli asserted that Operation Olive Branch in northwestern Syria will not distract Turkey from the fight against Daesh and Turkey is the only country actively fighting with its military on the ground in Syria against the extremist terrorist group. He added that the YPG collaborates with Daesh and has set extremist militants free to fight against Turkey's incursion.

Canikli also said Mattis denied such collaboration, saying that such a dirty alliance would be suicide for the YPG. Canikli said he responded by bringing up the YPG striking a deal with Daesh to help thousands of Syrian and foreign militants and their families escape from Raqqa along with their weapons and ammunition. The deal, which was shown in an investigative report by the BBC, was previously acknowledged by the U.S.

Canikli said Mattis stressed that the U.S. is working on a plan to recover arms from the YPG, especially heavy weapons. Mattis also said the U.S.-provided weapons were not given to the YPG in Afrin but in the areas in northeastern Syria that the group controls.

Turkish-U.S. relations have suffered due to the YPG since former President Barack Obama's term, during which U.S. military support for the YPG began. President Donald Trump has followed suit in Syria by arming the YPG, a policy Ankara had hoped would change with the new administration.

The YPG's ultimate aim is to establish an autonomous region in northern Syria by connecting the Democratic Union Party's (PYD) northwestern Afrin canton to the Kobani and Jazira cantons in the northeast, which Ankara considers to be a "terror corridor." As a result of the U.S.'s broken promises, Turkey also shifted its position and vowed to clear all terrorists from northern Syria, including Manbij and areas east of the Euphrates.

Mattis: Most complex situation I have seen

U.S. Defense Secretary James Mattis said yesterday that the U.S. and Turkey are having an open dialogue about their growing differences concerning the war in Syria, and are "finding common ground."

Speaking at the closing of a NATO defense ministers meeting, Mattis presented a calmer and more understated view of Ankara's escalating rhetoric over the U.S.'s continued aid to the YPG. "I believe we are finding common ground and there are areas of uncommon ground where sometimes war just gives you bad alternatives to choose from," Mattis said, adding that the YPG crisis is "probably the most complex security situation, fighting situation I have seen in over four decades of dealing with fights." Mattis called the overall conversations as "absolutely open and honest dialogue," and insisted that the two countries are "coming together on what we can do together."

The Turkish military and Free Syrian Army (FSA) yesterday liberated six villages in northwestern Syria from the PKK terror organization's Syrian affiliate, the Democratic Union Party (PYD) and its armed wing, the People's Protection Units (YPG). According to Anadolu Agency correspondents on the ground, the Turkish military and FSA liberated the village of Kharab Summak in Rajo town and Diwan Al Fawqani southwest of Afrin's Jindires district, including its three hills. Earlier in the same day, the villages of Karri, Sharbanli and Shadia, located northwest of the town of Rajo were liberated from the terrorists. Additionally, the village of Duraklı located in the town of Bulbul in northern Afrin was also liberated earlier yesterday.