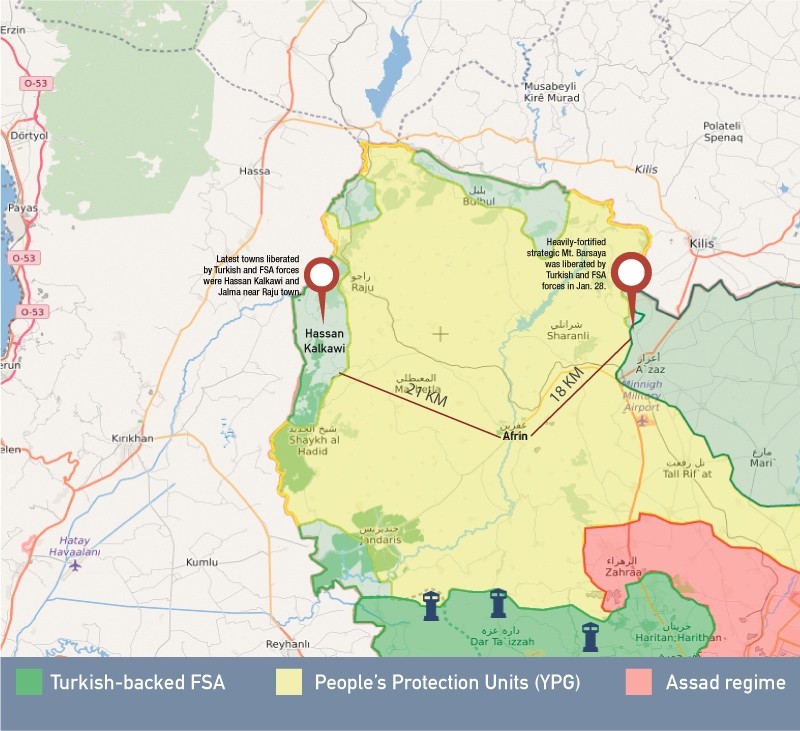 On Friday, the Turkish Armed Forces (TSK) and the Free Syrian Army (FSA) liberated two more villages in northwestern Syria from the control of PKK-affiliated terrorists.

The villages of Hassan Kalkawi and Jalma near the town of Raju were liberated from the People's Protection Units (YPG) terrorists during the ongoing Operation Olive Branch.

The TSK said Friday that at least 1,551 terrorists have been killed since the beginning of the operation in northwestern Syria's Afrin.

So far, 32 Turkish soldiers have been killed in action, as well as nine civilians killed by indiscriminate shelling of Turkish border towns and cities by YPG. Operation Olive Branch was launched by Turkey on Jan. 20 to remove the PKK/PYD/YPG/KCK and Daesh terrorists from Afrin in northwestern Syria. According to the Turkish General Staff, the operation aims to establish security and stability along Turkish borders and in the region as well as to protect Syrian people from the oppression and cruelty of terrorists. The operation is being carried out under the framework of Turkey's rights within international law, U.N. Security Council resolutions, its right to self-defense under the U.N. charter and respect for Syria's territorial integrity, it said. The military also said, "utmost importance" is being placed on not harming any civilians.

Afrin has been a major hideout for the Democratic Unity Party (PYD) and its armed wing YPG since July 2012 when the Assad regime in Syria left the city to the terror group without putting up a fight. Meanwhile, Pentagon spokesperson Eric Pahon said that they don't have any proof regarding whether militants of Syrian Democratic Forces (SDF) who went to Afrin are using weapons provided by the United States.

"We are tracking the weapons," said Pahon to Anadolu Agency, adding that necessary steps will be taken if they see any proof concerning usage of U.S. weapons in Afrin. 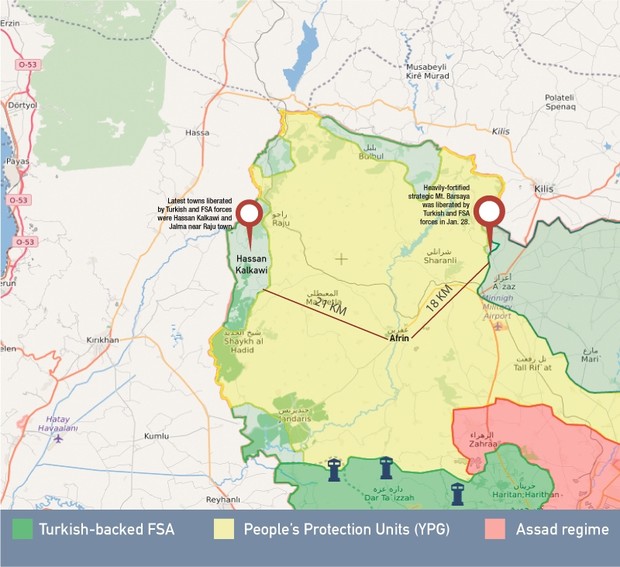 After newly liberated areas, the number of villages cleared of YPG terrorists increased to 65.

A YPG terrorist in Afrin, admitted on Thursday to dressing as a civilian to avoid being attacked by Turkish and Free Syrian Army (FSA) forces.

Russia's English language news channel RT broadcasted an interview with the terrorist in Arabic, who said: "We hide in olive gardens with our civilian outfits on to be safe."

The terrorist, wearing civilian clothing, confessed that as Turkish and FSA forces continue their operation to clear Afrin, YPG terrorists hide in civilian clothes with their guns to avoid being targeted in Afrin's villages.

The interview also revealed that the YPG terror organization had been using civilians to carry out attacks on Turkish forces and Turkish cities.

A correspondent asked, "Why do you wear civilian clothes?" He replied: "Because Turkish and FSA forces only target terrorists with military uniforms. We can only survive as 'civilians'".

The terror group has been using civilians as human shields and is preventing civilians from leaving the city.

During the operation, which was launched on Jan. 20, the Turkish military has said only terror targets are being destroyed and the "utmost care" is being taken to avoid harming civilians.

A British member YPG, admitted they are doomed by the strength of the Turkish army in Afrin.

Speaking to the British daily The Times, Huang Lei said he survived two weeks of bombing by Turkey; however, his squad of foreign terrorists fighting alongside the PYD and the PKK terror organizations had almost no hope for a final victory.

Huang Lei said they were "doomed due to the overwhelming strength of the Turkish army."

"I really doubt that we can hold off the Turkish troops," he told The Times.

"They have tanks. They have APCs [armored personnel carriers]. They have jets. They have satellites. They are a big country, a war machine. In time, slowly, they will definitely win one day."

Born in China, Huang Lei, 24, moved to the U.K. when he was a teenager. He recently appeared on the terrorist organizations' propaganda videos alongside with other foreign members of the group.

The Henry Jackson Society, a London-based think tank, suggested in a report in August 2017 the terrorist group should be proscribed in the U.K. after profiling 60 foreigners who joined the organization from 12 different countries.

"The Forgotten Foreign Fighters: The PKK in Syria" laid bare the ties between the PKK, listed as a terrorist organization in the EU, the U.S. and Turkey, and the PYD in Syria.

It urged the U.K. government to distance itself from the PYD and the PKK as it could potentially cause a crisis with Turkey, which is a fellow NATO member.