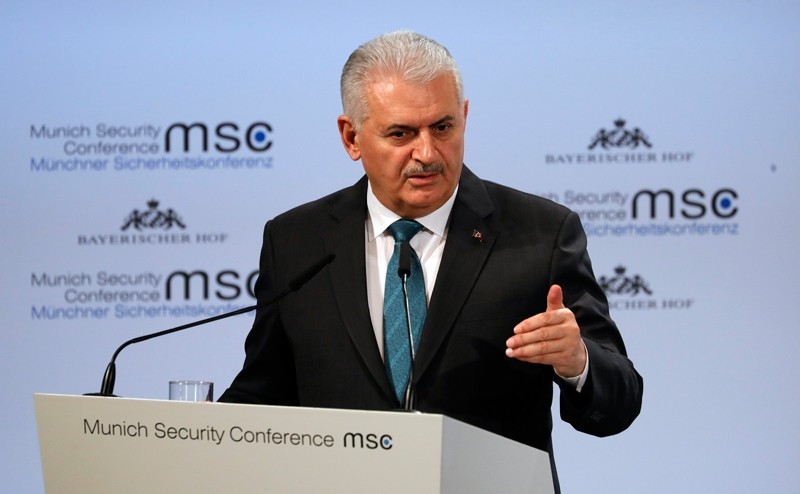 "So far 5,800 foreign fighters have been sent back from our borders, we did not let them in," Binali Yıldırım told the Munich Security Conference, adding that most of these fighters were residents of European countries.

"And we also banned 56,300 potential foreign fighters affiliated with Daesh from traveling to Turkey," he said, stressing that these measures significantly cut security risks for Europe.

The terrorist group Daesh has been responsible for dozens of terrorist attacks in Western Europe and Turkey, often carried out by foreign fighters who traveled to Syria and Iraq and then returned to their countries.

The premier underlined that Turkey's Operation Euphrates Shield in northern Syria ending last March and its strict anti-terrorism measures contributed significantly to eliminating the threat of Daesh in Iraq and Syria.

"Around 10,000 Daesh members are currently under arrest in Turkey," Yıldırım said, giving the most recent figures.

But he criticized Turkey's NATO ally the U.S. for undermining the fight against Daesh in the region by providing military support to the terrorist group PYD/PKK in northwestern Syria.

"The PYD/YPG is the Syrian branch of a terrorist organization which Turkey has been fighting for 40 years," referring to the PKK, a terrorist group which has taken some 40,000 lives.

"They are equal, they are the same terror group."

He repeated Turkey's call for Washington to end its support for the PYD/PKK terror group, citing its threat to Turkey's security along the border with Syria, which Turkey is fighting in its current Operation Olive Branch in northwestern Syria.

"NATO's southern borders are Turkey's borders. While we are protecting NATO's borders here, we cannot find any explanation for the acts of another NATO ally, which is cooperating with a terror organization which attacked our people, threatened our borders," he stressed.

The U.S. has called the PYD/PKK a "reliable ally" in its fight against Daesh, despite strong protests by Turkey, protests reiterated during U.S. Secretary of State Rex Tillerson's visit to Ankara this week.

The terrorist campaign by the PKK, which is listed as a terrorist group by Turkey, the U.S., and the EU, has killed some 1,200 people since July 2015 alone.

Yıldırım also said that both Ankara and Berlin were willing to mend relations.

"The important thing is to display willingness in repairing relations. I see both the willingness and the effort on both Turkish and German sides," he said in an interview to German news agency DPA.

Speaking about the release of German journalist Deniz Yücel, he said: "It is not a matter that could poison or negatively affect our relations."

Yildirim also called on the German government to put behind the tensions which had accelerated during the past few months. "The elections are now over, the referendum is over. The difficulties that emerged are now left behind."

Yıldırım said there are 3,064 Turkish prisoners languishing in Germany. "It does not matter whether they are political [arrests] or not as long as they are in prison."

Ties between Ankara and Berlin have been strained since the defeated coup in Turkey in 2016, as Turkish politicians heavily criticized their German counterparts for failing to show strong solidarity with Turkish government against the attempted military takeover.

Ankara slammed Berlin for granting asylum to several coup suspects, turning a blind eye to outlawed groups and terrorist organizations like PKK and FETÖ, which use Germany as a platform for their fund-raising, recruitment and propaganda activities.