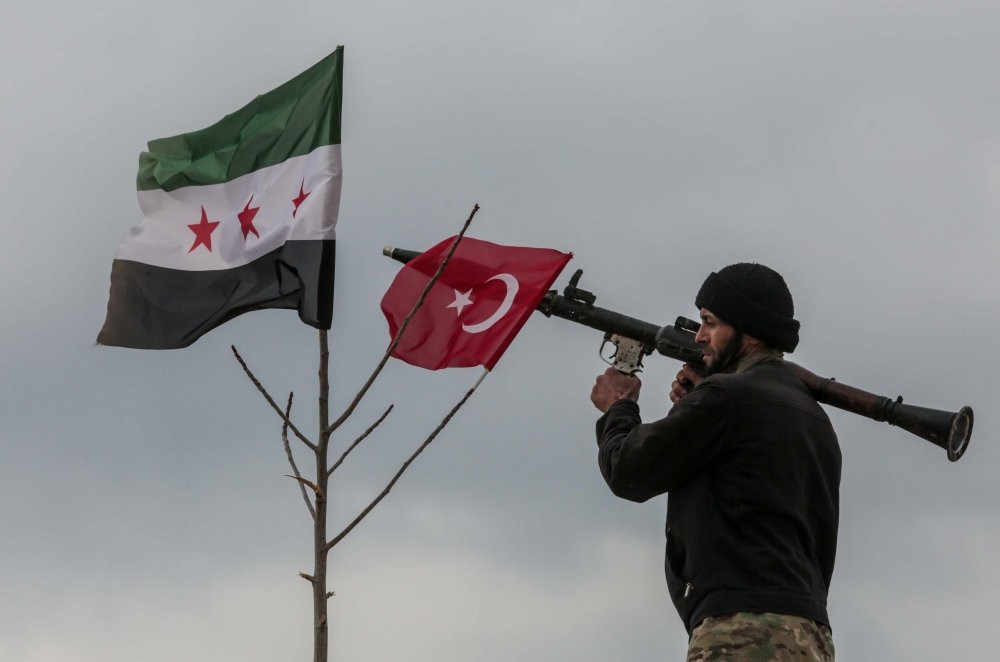 Turkey's Operation Olive Branch against the YPG and Daesh terrorists supports Syria's territorial integrity, as these groups aim to divide the country Ankara has said

Critics against the operation have argued that Turkey is violating territorial integrity through the cross-border operation in Syria.

Turkey's Foreign Minister Mevlüt Çavuşoğlu, however, underlines that Turkey has always voiced support for protecting the territorial integrity of Syria against terrorist groups who have a stake in the division of the country, such as the YPG and Daesh.

"During the process, we have mentioned territorial integrity frequently, underlined it in meetings we have participated. Here, no one should be concerned by Turkey over border and territorial integrity. Those we fight against right now, the PKK/YPG, are there to divide the Syrian soil. They [YPG] have exiled anyone who is not from them," Çavuşoğlu said yesterday during a joint press conference with his Algerian counterpart Abdulkadir Mesahil in Ankara.

Afrin, which has been held by the YPG since 2012, holds strategic importance for the YPG, as the terrorist group has looked to establish its autonomy in areas under its control in northern Syria. The autonomous region in northern Syria would consist of the northwestern Afrin area and the Kobani and Jazeera cantons in the northeast. Such an establishment ultimately enables the group to have an opening to the Mediterranean Sea, which would then give the terrorist entity a geo-strategic leverage in the region.

Turkey has long said that it will not allow such an establishment, for it has organic links to the PKK, which is listed as a terrorist group by the U.S., the EU, and Turkey. However, despite clear organizational links between the groups, the U.S. has supported the YPG, under the Syrian Democratic Forces (SDF), in the fight against Daesh since 2015 by providing them with weapons and military equipment, as well as logistical support.

The foreign minister also spoke on recent reports that Syria's Bashar Assad regime will provide support for the YPG against Turkey.

"We are not against anyone who fights against terrorist groups such as the YPG/PKK or Daesh. Terror is a common foe for all of us. We will not allow the ones who come here with the aim of protecting the YPG/PKK. There was an attempt previously by a convoy of five to ten vehicles and the necessary steps were taken," Çavuşoğlu said, and added: "No matter which force or country, who attempts to provide support for the terrorist groups of the YPG/PKK, are equal to the YPG/PKK for us. We treat accordingly."

Turkish officials reiterate that Turkey has all the right reasons to be in Afrin according to the principles of self-defense enshrined in Article 51 of the U.N. Charter. The operation is being carried out in accordance with Turkey's rights based on international law and U.N. Security Council resolutions, especially No. 1624 (2005), 2170 (2014) and 2178 (2014), and Article 51 of the U.N. charter on the right to self-defense, Ankara says.

Turkish military forces and the government have also highlighted that the operation is being carried out ensuring that civilians are not harmed.

"To date, no civilians have died or even been hurt in TSK operations," Bozdağ underlined.

The clear links between the YPG and the PKK have been ignored in Syria, while PKK sympathizers have also been free to hold activities across Western cities. Turkey has long criticized the West for their lack of support for Ankara, a member of NATO, in the fight against terrorism.

Head of the Turkish delegation to the NATO parliamentary assembly, Ahmet Berat Conkar said yesterday in an interview with AA that the PKK and its Syrian affiliates, the Democratic Union Party (PYD) and the YPG, are all part of the same organization.

Conkar said NATO allies were already aware of the connection but choose to stay silent over the issue.

NATO's parliamentary assembly is made up of delegates from 29 member states. Turkey has 18 members of parliament, making it one of the countries with the highest number of delegates.

Conkar, who is attending the NATO Parliamentary Assembly's Joint Committee Meeting, said the Turkish delegation had briefed its allies on Turkey's ongoing counterterror Operation Olive Branch in Syria's Afrin against the YPG/PKK and Daesh.

"We stressed that this issue should be one of the priorities on NATO's agenda, especially during the fight against all terrorist organizations, and that this support is very important in terms of the solidarity and harmony of the NATO alliance," Conkar was quoted as saying by AA.

Conkar said no NATO ally showed a negative stance regarding the Afrin operation.

"No other NATO ally has suffered more terrorist attacks, but we expect Turkey to respond in a proportionate and measured way," Stoltenberg told reporters in Brussels.