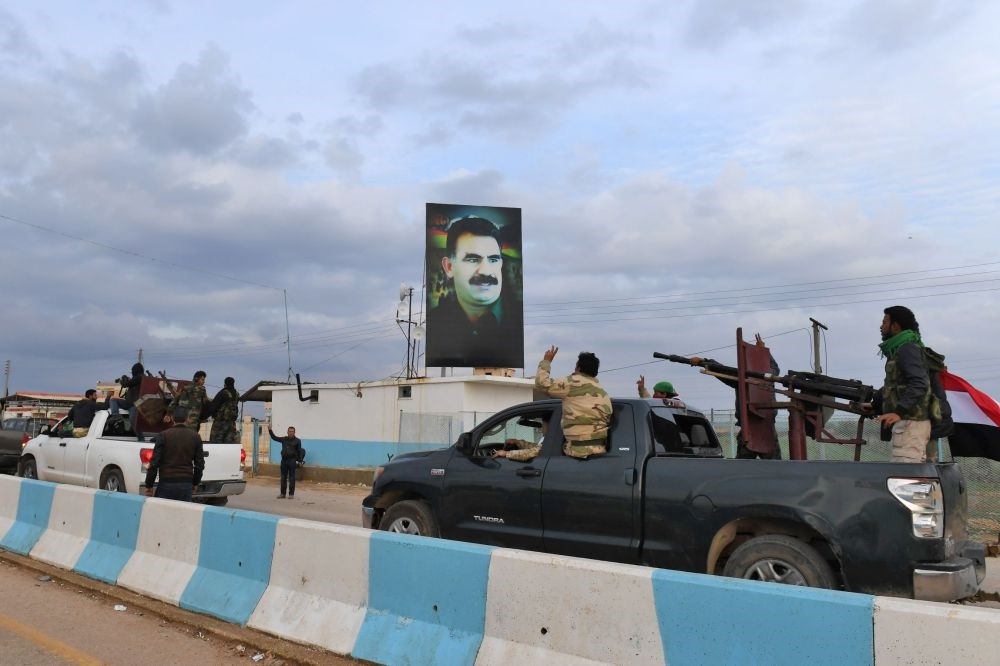 A photo is worth a thousand words, as the famous quote says. Over the weekend, an image of four elderly villagers in the Afrin region surfaced on the media, where they had their hands tied up in a barn and had explosives scattered around them by the People's Protection Units (YPG), who were using them as human shields against Operation Olive Branch. The photo was the latest example of YPG oppression in the region, against both the Kurds and other minorities, all of whom have suffered for many decades from the oppression of the Assad regime; both from the father Hafez and the son Bashar. The door of the barn where the elderly victims were found was also booby trapped with hand grenades, founds as Turkish-backed Free Syrian Army (FSA) forces continued to clear YPG terrorists from the village of Maskah in the Racu district of Afrin during the operation launched on Jan. 20.

Fortunately, bomb squads ensured that the explosives were disarmed before any harm was caused to the civilians. The incident is among the many featured in media recently, exposing the cruelties committed by the YPG, in addition to documented human rights violations, including the recruitment of child soldiers, arbitrary arrests and detentions of critical voices, including killing Kurds and the forced migration of non-Kurdish minorities in areas under the control of the YPG since the Syrian civil war broke in 2011. The YPG is the armed wing of the Democratic Union Party (PYD), which is the Syrian affiliate of the PKK, a group listed as a terrorist organization by the U.S., the EU, Turkey and the U.K. Ignoring the atrocities committed by YPG terrorists on the people in the regions under its control, the YPG has been depicted as the representative of Syrian Kurds by Western media. In fact, the YPG, under the umbrella group Syrian Democratic Forces (SDF), has been heavily armed and equipped by the U.S as part of the fight against Daesh. As complex as it gets, media reports have also suggested the YPG has been in touch with the Assad regime in Afrin, to attempt to gain support against Turkey's operation, a claim which has surfaced off and on since 2011.

Since the beginning of the civil war there has not been any major armed conflict between the regime forces and the YPG, in addition to the regime handing over control of several areas to the YPG. The cooperation between the YPG and the regime also ignores the oppression of the Syrian Kurds under Baathist regime in Syria. Muhamed Vali, a Kurdish member of the opposition Syrian National Coalition, said the recent reports of cooperation between the YPG and the Assad regime is a continuation of the past. "I believe this coalition is a continuation of the historical coalition between the regimes of Hafez Assad, the father, and the main head of the PKK [Abdullah Öcalan] who formed, in Syria, a branch called the YPG that Bashar Assad, the son, revived at the beginning of the Syrian revolution." Vali argued that cooperation has been maintained for three reasons.

First, to avoid having Kurdish people be part of the revolutionary activities since the Kurds are the second largest nation in Syria. Second, to avoid any Turkish role in the revolution or to support it, forcing it to be involved in smaller activities to protect its borders, in comparison with the role that it was hoped Turkey would play in changing the regime and building the new Syria with a new system. Third, the role of Iran in the region, which we now know has supported the PKK and the YPG since the beginning of the revolution against the Syrian people and Turkey for a future role in the Middle East, mainly after the Arab Spring.

Syrian Kurds, who are mainly inhabit the northern regions of the country, have long been the victims of oppression. In recent history, they have faced the cruelty of Baathist Assad regimes, first under Hafez, from 1971 to 2000 and then under his son, Bashar, who did not even recognize Kurds as Syrian citizens. Known for its Arab nationalism, the Baathist regime enforced a policy of demographic changes in areas with Kurdish populations, which is believed to be between 7 to 10 percent of the Syrian population — between 1.6 million and 2.5 million people. In 1962, a census conducted in Hasakah province declared nearly 20 percent of Syrian Kurds stateless, according to research conducted in 2016 by Chatham House titled "Kurdish Self-governance in Syria: Survival and Ambition." Despite the oppression of the Kurdish population by the Assad family, the PKK and its affiliates have found Syrian territory to be a safe haven for activities since the 1980s. As an alternative approach, when Turkey put pressure on the Syrian regime in the late 1990s to extradite the PKK's now imprisoned leader Abdullah Öcalan, the terrorist organization's leadership founded the PYD in 2003. At the time, the regime did increase control over the Syrian branch of the PKK, however, the regime's aim of using the PYD and the YPG as a tools against Turkey never diminished fully, even during the period of good relations between Turkey and the Syrian regime.

In the areas under its control, the PKK and its affiliates utilize the methods of victimization and compulsion over people, says Mustafa Ekici, a Kurdish journalist and coordinator of TRT Kurdi. "The PKK and its affiliates first victimize the people. Then, it makes them obliged to keep attachments or connections to the group. The group carried out this strategy in Turkey, but a worse version has been carried out in northern Syria. Öcalan said, 'From each family I want three people: One in the grave, one in the mountains, one in the jail.' This was the method of victimization. In Syria, they have forcefully recruited thousands of youth and children between the ages of 10 and 17 to join their lines," Ekinci said. Groups like the Human Rights Watch, Amnesty International, the KurdWatch, as well as the United Nations have reported that the terrorist groups have used child soldiers, forcefully recruited members for combat, forced people out of areas under its control, carried out arbitrary arrests and confiscated property, which led to major demographic changes. "It is interesting that joining PKK lines was never forbidden by Assad, however, when people returned from the PKK, they would be imprisoned. This was, in a way, saying join PKK and die for it," Ekinci adds.

The Bashar Assad regime handed over Afrin to the PYD without a fight, and the area currently has 8,000 to 10,000 terrorists, according to information gathered by Anadolu Agency (AA). Since Operation Olive Branch began, Afrin residents, who fled the YPG and sought refuge in southern border towns of Turkey, have also spoken out about the group's oppression, while also longing for a time that their towns would be cleared of the terrorist group. Earlier in January, Xalid Eli, an official from the Syrian-based political organization Kurdish National Council, was quoted by AA saying the PKK's tyranny has surpassed that of Syrian leader Bashar Assad and added that Kurdish politicians have been terrorized by the militant group. The Kurdish National Council (KNC) in Syria has been a critical voice against the arrests and abductions carried out by the PYD, including a claim that the PYD is working with the Assad regime. "Assad sent the PKK to fight us in order to destroy Kurdish political parties. The regime has put pressure on Kurds in Rojava by cooperating with the PKK, and the pressure still persists," Eli was quoted as saying, and added: "The PKK is not on the side of the Kurds. Even Bashar Assad and his father did not harm us as much as the PKK. The Assad regime could not have changed the demographics of Rojava as much as the PKK did."