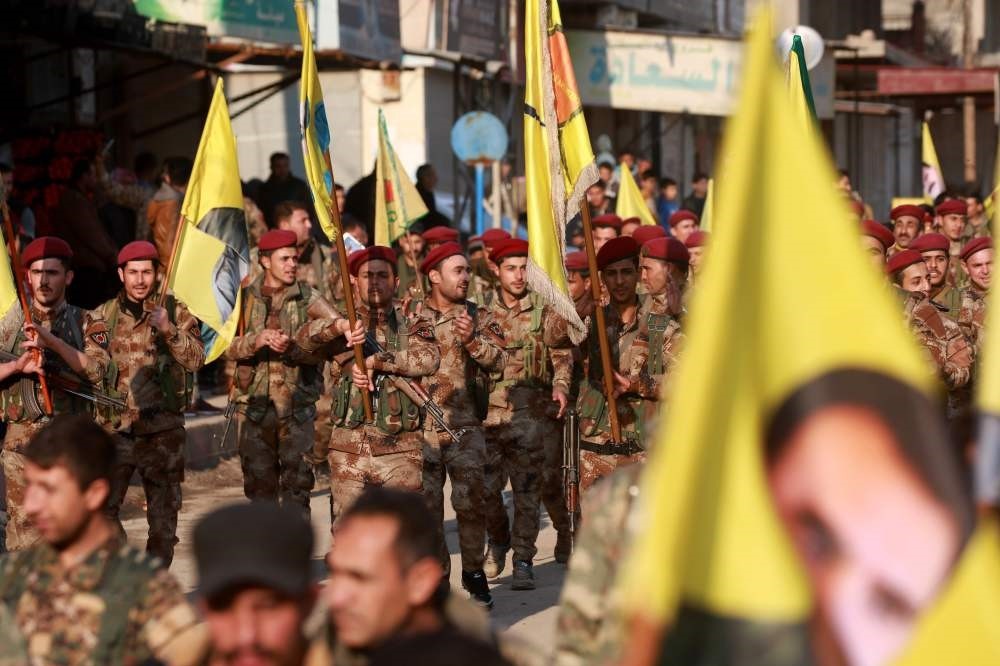 YPG terrorits demonstrate with flags and others bearing the portrait of PKK leader Abdullah u00d6calan in the town of al-Muabbadah, Hassakah, Feb. 24.
by Şeyma Nazlı Gürbüz
Feb 27, 2018 12:00 am

Although still questioned in the international arena, there is plenty of evidence for the PYD's link to the PKK, including the PKK's statements that the two operate under the umbrella of the KCK with the same ideology and structure

On Sunday, the PKK's Syrian affiliate Democratic Union Party (PYD)'s former leader Salih Muslum was captured in Prague thanks to Turkey's arrest warrant for him for his links to the terrorist organization. Turkey immediately requested Muslum's extradition from the Czech authorities, reminding that the country previously presented a box full of evidence on his relationship with both the PYD and the PKK. However, although recognized as a terrorist organization not only by Turkey but also the U.S. and the U.K., it remains a struggle in the international arena to demonstrate the connection between the PKK and its affiliates such as the PYD, which makes it harder to prove the latter's terrorist activities. As a matter of fact, there is plenty of evidence that clarifies the link between the PKK and the PYD, showing that both are operating under the umbrella of an organization named the Kurdistan Communities Union (KCK) alongside other Kurdish groups.

The KCK is the umbrella organization that unifies the Apoist [a term used to suggest followers of the group's leader Abdullah Öcalan] Kurdish groups, meaning the groups with Kurdish origin that were founded by Abdullah Öcalan and operate in accordance with his ideology. Initially named the Kurdistan Committees Union (KKK), the umbrella organization was founded in 2005 as the PKK's con-federal council and is defined as a community within Kurdistan, which has territories in parts of Syria, Iraq, Iran, and Turkey by its founding articles. The organization has an executive committee, a representative assembly called the Kongra-Gel, and a judiciary branch. Murat Karayılan and Cemil Bayık were the first chairman of the executive council and executive council's vice president, respectively.

"Kurds can develop a democratic dialogue or method with the states they live in. Kurds wage a struggle within the understanding of a democratic nation. This is why the KCK represents all Kurds. The KCK can be in talks with Iran, Syria, Turkey and Iraq on behalf of Kurds," Öcalan defined the KCK, the structure that the KKK evolved later into, in an article published by the PKK's official magazine, Serxwebûn (Independence), in April 2007. The Apoist Kurdish groups that operate under the KCK are known as the PKK, the PYD, the Kurdistan Free Life Party (PJAK) and the Kurdistan Democratic Solution Party (PÇDK) alongside their armed wings.

Fuad Ömer, a former PYD chairman who served until 2010, gave an extensive interview to the Syrian newspaper Aso in 2008 in which he explained that they are building a community of democracy in western Kurdistan.

The PKK was established in 1978 by Abdullah Öcalan. Initially headquartered in Syria in 1998, the terrorist organization had to leave Syria after Turkey threatened war against Hafez Assad's Syrian regime, which was providing logistics and training for Kurdish militants. This move created the necessity of coming up with a new group in northern Syria to continue the activities.

In 2003, the PKK changed its name and established the "People's Congress of Kurdistan," or the Kongra-Gel. The PKK's armed wing, the People's Defense Forces (HPG), which has been operating since 2000, preserved the previous organizational scheme and continued its operations without regard to the PKK's name change. The KCK released a statement in 2006, in which they acknowledged the PYD as their affiliate in western Kurdistan. "The PYD, as the KKK organization's arm in western Kurdistan, tried to restructure itself and create a system by holding a general congress," the KKK Executive Council stated, and Turkish authorities labeled the PYD as the KCK's Syrian branch in 2009.

"I founded the PYD, as I did PJAK [the PKK's Iranian arm]. The PYD is connected to the PKK, and acts upon on PKK orders," Osman Öcalan, the younger brother of Öcalan, said in an interview with Iraqi television station Zelal in 2013.

According to a Wall Street Journal article that was published in 2015 with the title "America's Marxist Allies Against ISIS," the PKK says its affiliates - Syria's People's Protection Units (YPG) and groups called the PJAK in Iran and the HPG in Iraq - are separate but closely linked while PKK fighters and some analysts say that they are one and the same.

"It's all the PKK but different branches," says Zind Ruken, a PKK terrorist that The Wall Street Journal interviewed. "Sometimes I'm a PKK, sometimes I'm a PJAK, sometimes I'm a YPG. It doesn't really matter. They are all members of the PKK," she adds. Similar to the PKK, the PYD also considers Öcalan its leader, the Kongra-Gel the supreme legislative body of the people of Kurdistan and the KCK/Rojava its system of democracy for Kurdish people in Syria.

In 2010, Salih Muslum was elected to the PYD leadership. Yet, he had to flee Syria due to the pressures from the Syrian regime and, according to Michael Gunter, who published a book on Syria's Kurds, took refuge in Iraq's Qandil Mountains, where the PKK and the PYD established a joint headquarters. In 2017, he and his co-chairwoman Asiyah Abdullah were replaced by Shahoz Hesen and Ayshe Hiso. In 2004, the PYD established its armed wing, the YPG, which has many similarities with the PKK's armed wing, the HPG. Both armed organizations have a similar name, acronym and flag.

Similar to the PYD, PJAK is the Iranian branch of the KCK, which was founded in 2004 and currently operates under the leadership of Abdul Rahman Haji Ahmadi. Its armed wing is called the Eastern Kurdistan Units (YRK). The organization is recognized as a terrorist group by the U.S., Turkey and Iran. The PÇDK, on the other hand, operates in Iraq and was founded in 2002. The current leaders of the organization are Diyar Garip and Necibe Ömer.