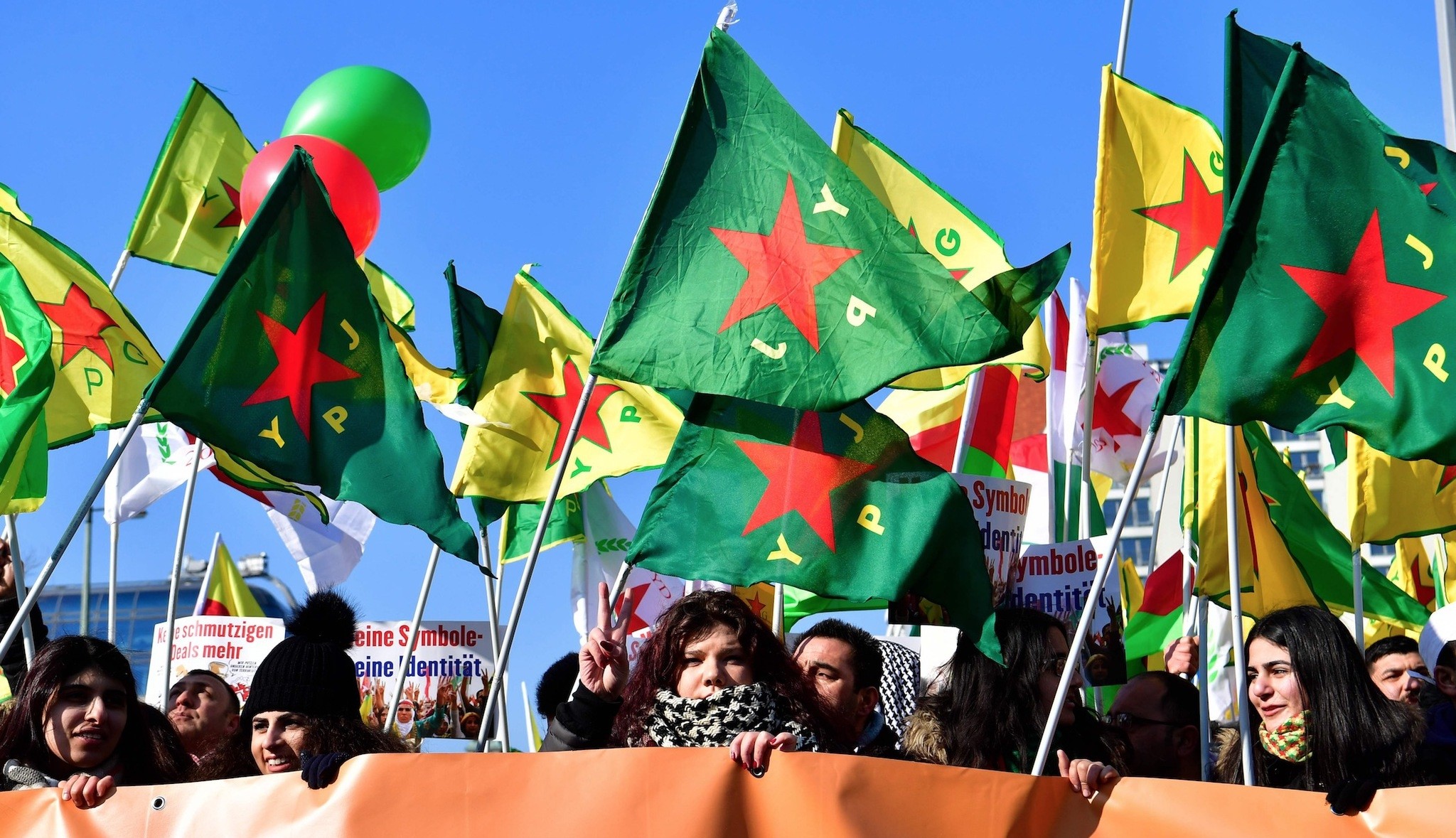 The PKK terrorist group's supporters enjoy freedom to carry out rallies across EU cities with the participation of European politicians, despite being listed as an outlawed group in by the EU member states

Thousands of PKK supporters held a rally in the heart of the German capital Berlin, with the participation of some German politicians and the former co-chair of the PKK's Syrian affiliate, Salim Muslum, over the weekend. The PKK supporters's freedom across the EU has been an issue which Turkey has long demanded be addressed by European leaders. Organized by PKK-affiliated groups, the demonstration spread terrorist propaganda as protesters waved banned PKK flags, banners of its imprisoned leader Öcalan and flags of the PKK's Syrian affiliate, the People's Protection Units (YPG), without any police intervention.

PKK sympathizers called for an end to Turkey's Operation Olive Branch in Syria's Afrin against PKK and YPG elements. As German and European Union authorities remain indifferent to PKK terrorism, Turkish people living in Europe have increasingly faced assaults by terrorists following Operation Olive Branch in Syria, a recent report prepared by the Union of European Turkish Democrats (UETD) highlighted. According to the report, PKK supporters have attacked the Turkish community across Europe more than 40 times in the last one-and-a-half months.

President Recep Tayyip Erdoğan has repeatedly criticized indifferent stance by Turkey's Western allies, saying that ignoring terrorism will eventually turn into a problem for them.

"The world, which went through the test of fascism and communist ideologies, is now going through test of terrorism. The world is not going through this test successfully. If the members of an outlawed group can commit violence against innocent people in a country, then that's where words fail," Erdoğan said late February.

The PKK is a terrorist organization that is also recognized as a terror group by the EU. However, PKK followers are still able to hold mass rallies and maintain their organizational presence across EU cities. The group has also been able to recruit members and extract financial resources from its activities in Europe, including drug trafficking.

Former leader of the PKK-affiliated Democratic Union Party (PYD), Muslum, also attended the demonstration. Muslum was recently detained in Prague in the Czech Republic and later released, which Ankara considers a breach of international law.

Turkey had issued arrest warrants and subsequent red notices for Muslum and 47 other high-ranking PKK figures in Nov. 2016. On Feb. 13, a new red notice was issued for Muslum after he was included on the updated most wanted terrorists list with a TL 4 million ($1.05 million) bounty on his head.

The indifference of German authorities to the pro-PKK demonstration and terrorist elements in the German capital led to harsh criticism in Turkey. Mustafa Yeneroğlu, an Istanbul deputy for the ruling Justice and Development Party (AK Party), said: "The alleged peace demonstration currently taking place in Berlin is indeed a propaganda campaign by the PKK / PYD." The AK Party politician also commented on the attendance of Muslum: "Today in Berlin: Organized by the banned PKK and under the shadow of forbidden PKK flags one of the leaders of the PYD speaks, which, of course, has nothing to do with the PKK," drawing attention to the claims of pro-PKK figures that the PYD/YPG has no links to the PKK terrorist group.

Last year, a report from the European Union's law enforcement agency EUROPOL revealed that Belgium, France, Germany, Italy, Romania and Switzerland are countries where the PKK openly conducts propaganda and fundraising activities, according to the publication "The European Union Terrorism Situation and Trend Report 2017."

"Belgium, France, German, Italy, Romania and Switzerland reported that the PKK has continued its fundraising, propaganda and recruitment activities," the report said, adding that the terrorist group has a powerful organization and support in France, Italy and Switzerland, the report revealed.

Germany outlawed the PKK in 1993, but the country's authorities have been reluctant to take strong measures against the funding, propaganda and recruitment activities of the group, despite repeated warnings from Turkey. Berlin's reluctance to combat PKK activities in the country has caused major friction between Turkey and Germany. The pro-PKK demonstration in Berlin on Saturday is also expected to strain ties between the two sides amid signs of normalization in ties in recent times as sympathizers for the terrorist group spread lies about the Turkish offensive in Afrin, claiming that civilians are killed every day.

On Saturday's protest, four German policemen were injured in clashes, while some German politicians, including German Left Party Deputy Chairman Tobias Pflüger, attended the protest in support of the PKK/YPG.

Even though German authorities have banned several pro-PKK demonstrations in the cities of Cologne and Leverkusen as well as some others, the protests on Saturday in one of the most famous venues of Berlin did not face any challenges. Turkey has long been accusing Germany of turning a blind eye to PKK terrorism within its borders. The Verfassungsschutz, the German domestic intelligence agency, estimates the PKK has about 14,000 active members in Germany. The group, which is listed as a terrorist organization by the European Union, has collected more than €13 million (over $14 million) in Germany alone from September 2015 to early 2016, according to the Federal Office for the Protection of the Constitution, or BfV.

Operation Olive Branch was launched by Turkey on Jan. 20 to remove the PKK/PYD/YPG from Afrin in northwestern Syria. According to the Turkish General Staff, the operation aims to establish security and stability along Turkish borders and in the region as well as to protect Syrian people from the oppression and cruelty of terrorists. The operation is being carried out under the framework of Turkey's rights within international law, U.N. Security Council resolutions, its right to self-defense under the U.N. charter and respect for Syria's territorial integrity following numerous attacks from YPG-held areas in Afrin region. The military also said, "utmost importance" is being placed on not harming any civilians.

A similar black propaganda attempt in Berlin took place on Feb. 15 during a joint press conference between Prime Minister Binali Yıldırım and German Chancellor Angela Merkel at the German Chancellery. A person, who allegedly entered the building by claiming to be a journalist, interrupted the interview by showing supposed images from Afrin with injured civilians in them. However, the images turned out to be old and from different parts of Syria.