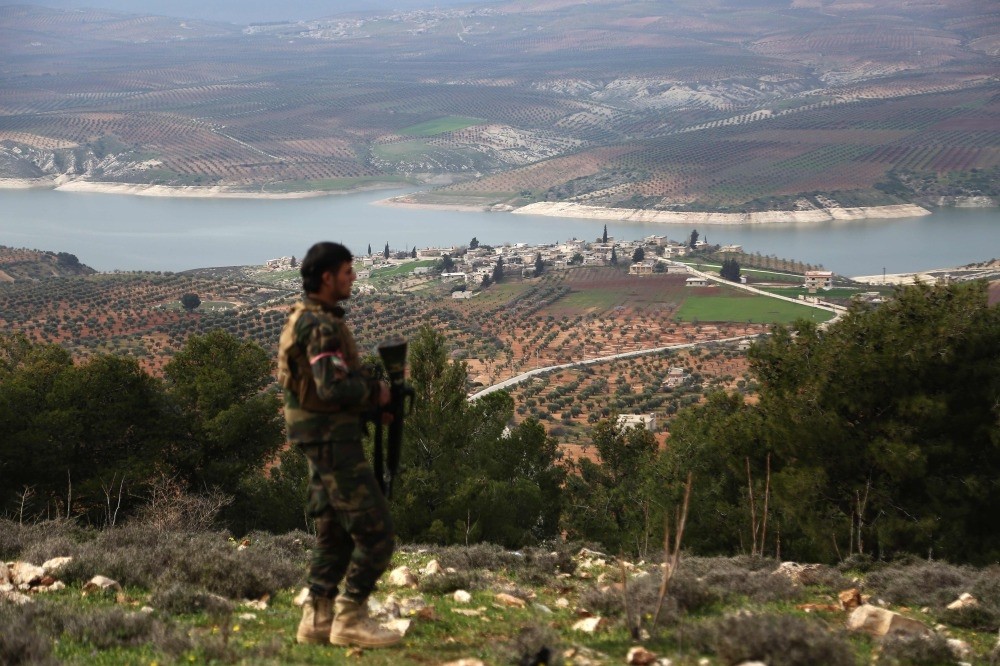 An FSA fighter walks along a ridge overlooking Lake Maydanki, north of the Syrian city of Afrin, after they took control of the nearby village of Ali Bazan from YPG terrorists on March 4.
by Daily Sabah Mar 07, 2018 12:00 am

YPG terrorists, which Washington considers to be reliable partners in fight against Daesh, have left the U.S.-backed ground operations in eastern Syria and moved to northwestern Afrin to fight against Turkey's Operation Olive Branch

The U.S.-backed operations against the Daesh terrorist group in eastern Syria have been paused, U.S. Col. Rob Manning, a Pentagon spokesman, said on Monday, adding that its partner in the field, the People's Protection Units (YPG), have shifted focus from fighting against the terrorist group to fighting against Turkey's Operation Olive Branch in northwestern Afrin. The controversial move is expected to further strain Ankara-Washington ties given that the U.S.-backed YPG will be fighting against the forces of Washington's NATO ally. The Pentagon spokesman told reporters on Monday that there was an "operational pause" in the ground operations against Daesh, but added that U.S. airstrikes against Daesh have not been effected by the decision.

"The nature of our mission in Syria has not changed," Manning said. He added that the Syrian Democratic Forces (SDF), which is predominantly led by the PKK terrorist organization's Syrian affiliate YPG, remain as the major partner in Syria. The PKK is considered a terrorist organization by the U.S., EU, and Turkey. Turkey launched Operation Olive Branch on Jan. 20 to eliminate the threat posed by the YPG to Turkey's national security from northern Syria. The operation in Afrin, conducted by the Turkish Armed Forces (TSK) and the Free Syrian Army (FSA), has not been explicitly opposed by the U.S., and Washington has said Turkey's security concerns are understandable. U.S. officials have said that there are no U.S. forces in Afrin and that it does not support the YPG in Afrin.

Also on Monday, Maj. Adrian Rankine-Galloway, another Pentagon spokesman, said some of the fighters from their partners have left the fight against Daesh in eastern Syria.

Such a shift by the U.S.-backed YPG, which Ankara also considers to be a terrorist group, will ultimately mean U.S. partners will be fighting against Turkish forces, which are part of NATO.

An SDF spokesman was quoted by Reuters yesterday as saying that the group has been sending members to Afrin. "We have taken out 1,700 fighters," Abu Omar al-Edilbi said in Raqqa. He added that 700 SDF members have already been sent to Afrin.

Speaking on the issue on Wednesday, Presidential Spokesperson Ibrahim Kalın said that it is expected that the U.S. will intervene to prevent deployment of YPG/PKK forces under its control from Manbij to Afrin. Regardless of their action or inaction, Turkey took necessary precautions on the field, Kalın said.

Turkey's operation in Afrin aims to stop the YPG from establishing an autonomous region in northern Syria, connecting the Democratic Union Party's (PYD) northwestern Afrin canton to the Kobani and Jazeera cantons in the northeast – what Ankara calls a "terror corridor" that threatens Syria's territorial integrity and a threat to Turkey's borders. In addition, it aims to liberate people from YPG oppression in areas under its control, a move that would enable refugees in Turkey to safely return home.

U.S. support for the YPG has long been opposed by Ankara, which says a terrorist group cannot be a partner in the fight another terrorist group. In addition, due to the YPG's organizational links to the PKK, Ankara says U.S. weapons given to the YPG could be used by the PKK against Turkey and Turkish citizens.

Ankara argues that the U.S. has provided more than 4,500 truckloads of weaponry and military equipment to the YPG so far.

Speaking in a press conference on Tuesday, Foreign Ministry spokesman Hami Aksoy reiterated Ankara's expectations from the U.S. to retrieve the weapons provided to the YPG in Syria, and added that the issue will be discussed in the meeting between the working groups scheduled for March 8-9 in Washington. Aksoy said that the U.S. needs to take solid steps and fulfill its promises without delay.

As relations between Ankara and Washington were on the brink of an abyss, in a meeting at Turkish capital last month, Foreign Minister Mevlüt Çavuşoğlu and U.S. Secretary of State Rex Tillerson decided to enhance dialogue to resolve differences of opinion on critical issues. The two countries agreed to form technical committees to work on disputed issues. The first of these committees will meet on March 8-9 in Washington. Turkey expects that root problems will be addressed during these meetings, and the U.S. will take steps considering Turkey's legitimate concerns over its national security.

Meanwhile, commenting on Col. Manning referring to high-ranking PKK leader Ferhad Abdi Şahin, codenamed "Mazlum Kobani," as "General Mazlum," Aksoy said: "The Pentagon spokesman continues to speak nonsense again." Manning previously said that the Pentagon will continue to support General Mazlum and other military councils in areas captured from Daesh terrorists as long as they fight against Daesh. Şahin is on Turkey's most-wanted list and is being sought by Turkish authorities with a TL 4 million Turkish lira [$1.5 million] bounty on his head.

Ankara says it is conducting the Afrin operation within international law and that the operation is in line with U.N. Security Council resolutions, especially No. 1624 (2005), 2170 (2014) and 2178 (2014); Article 51 on the Right of Self Defense of the U.N. Charter; and respect for Syria's territorial integrity. The military has also said the "utmost importance" is being placed on not harming civilians.

President Recep Tayyip Erdoğan yesterday commented on concerns over civilian casualties from the operation, saying the military pays the utmost attention to it and that images circulated in media are from elsewhere, not Afrin.

Speaking during a weekly Parliamentary group meeting, Erdoğan said not a single civilian has been intentionally injured or killed so far during the operation.

The president also said that Ankara's allies aid and abet those who consider Turkey to be a target. "You said you were friends. How are we friends? You said that we were allies. That we were together in NATO," the president said, referring to support given the YPG by allies.