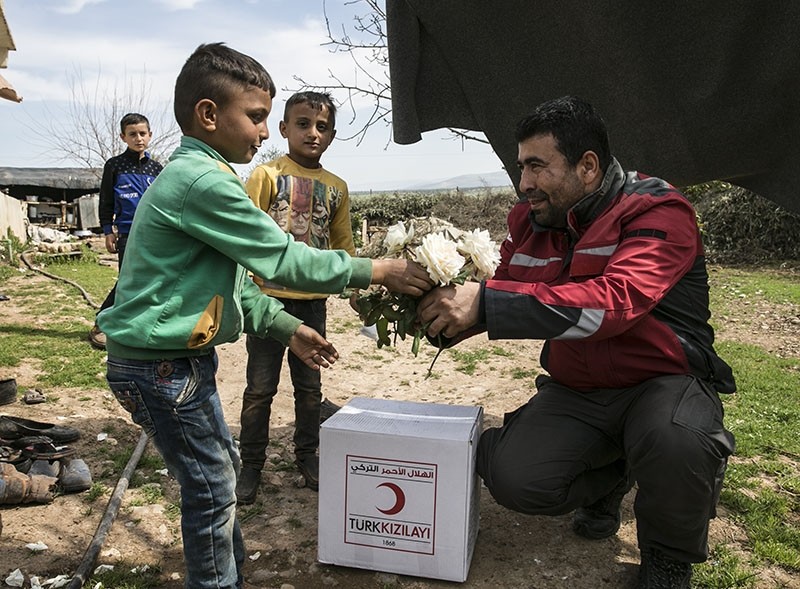 The liberation of villages and towns in Afrin from PKK-affiliated groups alleviated civilians' life in the region who were previously enforced to dig ditches and trenches, forcibly recruited by the terrorists and used as human shields.

New footage revealed Saturday shows people celebrating the arrival of Operation Olive Branch forces in the village of Kafr Mize, which is located about 5 km of northeastern Afrin. The locals embraced Free Syrian Army (FSA) fighters who reached the village, while women ululated to express their joy. The village was liberated two days ago from People's Protection Units (YPG).

The Turkish army and the FSA also continue to clear Afrin of mines and explosives left behind by the YPG. A spokesman for Jaish al-Nasr, a group fighting under the FSA umbrella, told Anadolu Agency (AA) that work to clear mines and explosives continues to ensure civilians can return safely to their homes.

The locals in Afrin has long suffered from the YPG, who took over the district from Assad regime in 2012 without a fight.

The YPG is also using the civilians as human shields since the beginning of Operation Olive Branch, preventing residents who demand to leave the city from heading for safer places.

Gruesome footage taken by Turkish unmanned aerial vehicles (UAV) of the Turkish Armed Forces (TSK) revealed Thursday that several people were killed after a truck carrying civilians in northwestern Syria's Afrin region passed over mines planted by YPG terrorists in a bid to prevent civilians from fleeing the region near Kurayriyah village.

The video that captured the moment of the incident shows the terrorist group first setting mines in the area; later on, two terrorists carrying AK-47 rifles deployed more explosives. After the footage by an unarmed UAV, that was on reconnaissance mission at that time, reached the TSK headquarters, Turkish warplanes took off and killed the terrorists. A truck carrying civilians is seen, which later crashes into the mines set up by the PKK's Syrian affiliate, the YPG. The truck hit the mines and after the explosion, civilians try to escape, some of whom step on other mines installed in the area, sparking more explosions. Three civilians, a 3-month-old baby and two children died as a result of incident.

Meanwhile, the TSK and the FSA liberated 13 more villages in Syria's northwestern Afrin region yesterday. The villages of Qeretepe and Qastel Kisk in Sharran, northeast of the city of Afrin, as well as the villages of Khalidiah and Jalbul near the region's center, and the village of Ka'n Kurk in the Jindires district were cleared early yesterday. The latest advancements by Turkish troops and FSA fighters brought the front line only two kilometers away from Afrin's town center.

A strategic airstrip called Bablite, located between Jandaris and Afrin, was also liberated from terrorists.

Speaking at the 6th provincial congress of the ruling Justice and Development (AK) Party in the northwestern province of Bolu, President Recep Tayyip Erdoğan said yesterday that the Turkish army and the FSA have so far liberated 950 square kilometers (590 square miles) in Afrin, adding that the ongoing operation is not to "occupy" the region but to liberate it from YPG terrorists, and then hand it over to the people living there.

"In the Afrin region, the owners of the [liberated] lands have started to come back," he said.

Erdoğan added that a total of 3,300 YPG/PKK and Daesh terrorists have been killed in Afrin since the start of Operation Olive Branch.

Humanitarian efforts also is accelerated for civilians in the liberated villages and towns of Afrin. A group consisting of doctors and nurses reached Deir Ballut village of Jinderes town on Friday. The group made check-ups for children in the village and those who came from neighboring villages, also distributed medicine. 190 box of humanitarian aid also distributed to those in need. Speaking to AA correspondents, Muhammed Karamustafa, a villager from Deir Bellut explained about the YPG's persecution and expressed his gratitude to FSA fighters and the Turkish army. "The YPG terrorists seized my tractor, olives, money, left nothing to me," he said.

While the YPG force civilians to stand against the Turkish army and the FSA, senior members of the YPG are fleeing Afrin, local sources said Saturday.

Speaking to AA on the condition of anonymity, reliable local sources said one of them is Said Ismet Gubar, who serves as the so-called "justice minister" in the province, which is occupied by the YPG group. Gubar fled to Nubl, a small city in northern Syria, which appears to be under the control of Assad regime but is actually occupied by Iran-backed armed groups. The terrorist organization continues to negotiate with Iranian-backed groups to get Gubar back, sources said.

Another senior member, who tried to escape from Afrin, was the group's so-called Interior Minister Hasan Bayram, the sources said. Bayram, who tried to leave the city through al-Zeyara village which links Afrin to the regime-held area, was apprehended by some YPG members. Bayram, whose attempt to escape failed, was also said to be carrying a large amount of money with him.