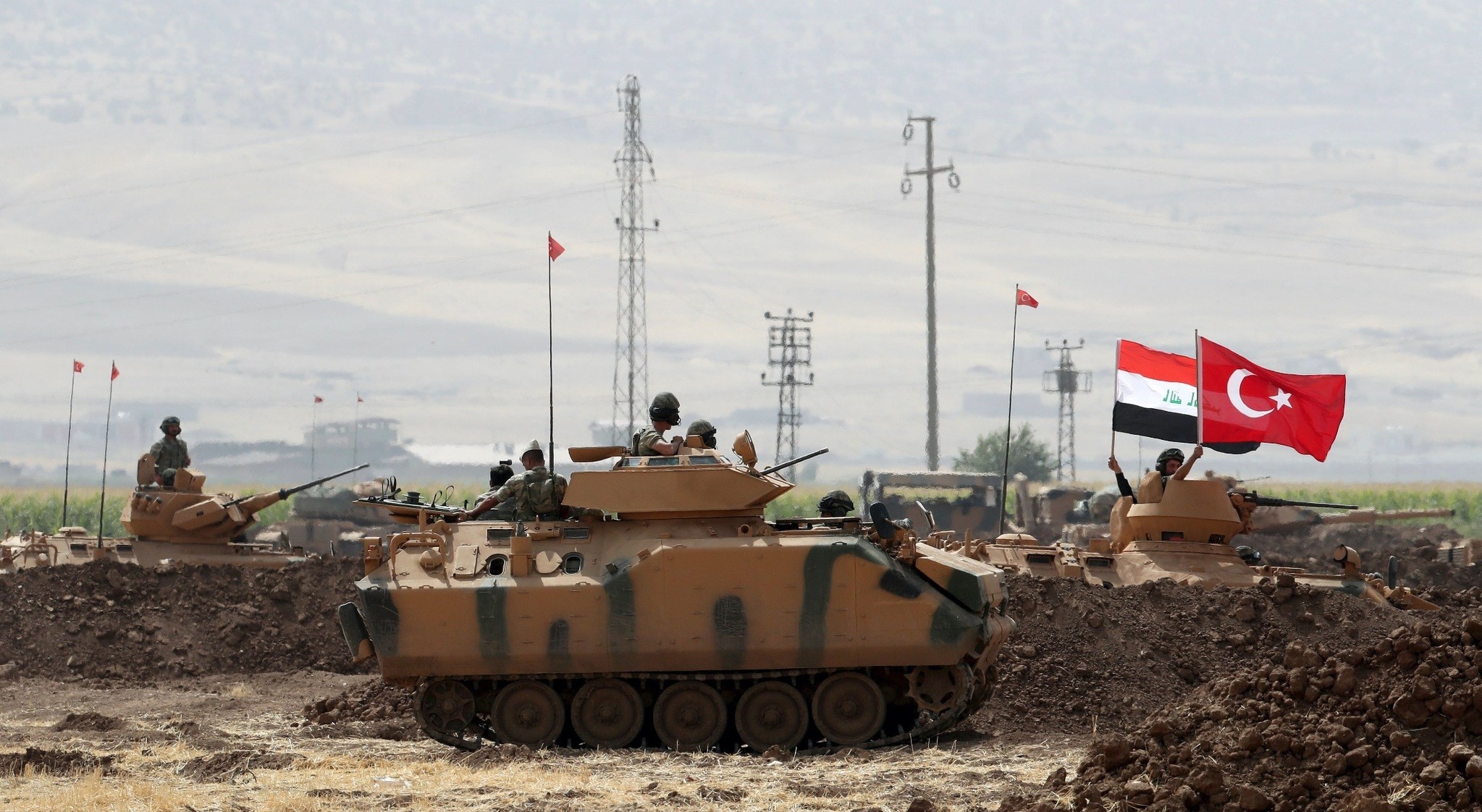 Soldiers hold the Turkish and Iraqi flags while standing in the turret of a Turkish armored vehicle participating in a military exercise near the Turkish-Iraqi border in u015eu0131rnak, Sept. 26, 2017.
by Özgenur Sevinç Mar 13, 2018 12:00 am

Ankara has signaled a cross-border operation in Iraq against the PKK terrorist organization to eliminate threats to its national security, and regional experts agree that the PKK presence has been an important security problem for both Turkey and Iraq.

As Iraq has successfully finalized its fight against Daesh, Turkey has also been signaling extending its ongoing counterterrorism operations in northern Syria to Iraq.

Bilgay Duman, a Middle East expert at the Center for Middle Eastern Strategic Studies (ORSAM), said that the PKK, which is active in northern Iraq's Sinjar and regions around Kirkuk, Sulaymaniyah and Tuzhurmatu, poses serious threats.

Duman said the PKK infiltrated Iraq on the pretext of fighting Daesh and attempted to legitimize its existence there by using this rhetoric.

"As the Iraqi government, which developed good relations with Turkey, finalized the fight against Daesh, this might provide a new framework for the steps to be taken against the PKK," he said.

The PKK established a foothold in Sinjar in 2014, claiming that it was protecting the local Yazidi community from Daesh.

Citing that the PKK cannot use its Daesh pretext any longer, Can Acun, another Middle East expert at the Foundation for Political, Economic and Social Research (SETA), said Turkey will accelerate efforts to eliminate the PKK in the region.

Acun said that the ties between Ankara and Baghdad gained new momentum following the joint stance against the independence referendum under the Kurdistan Regional Government (KRG). He added that this would also lead to taking solid steps to face terrorist threats.

The PKK – listed as a terrorist organization by Turkey, the U.S. and EU – resumed its armed campaign against Turkey in July 2015 after a brief reconciliation period.

The Turkish Armed Forces (TSK) have been launching airstrikes targeting the PKK in northern Iraq.

Explaining that in September, Turkey and Iraq conducted a joint operation to the border region, Duman said it indicated that the two countries would enhance cooperation against the PKK.

"Turkey also launched an air operation on Sinjar in April 2017, signaling that it will take steps with or without other countries' cooperation," Duman added.

Foreign Minister Mevlüt Çavuşoğlu said: "Both Syria and Iraq need to be cleared of all terrorist groups. Otherwise the political steps that will be taken regarding a political solution would fail."

He asserted that both the Iraqi central government and the KRG would not feel secure because of the existence of terrorist groups in Iraq.

Çavuşoğlu said that Iraq has achieved essential achievements against Daesh with international support, but during this time the PKK entered cities from Qandil and other mountains targeting the security of Iraq and Turkey.

Çavuşoğlu said that after the elections held in Iraq and Turkey's Afrin operation is completed, a joint operation might be launched to clear the PKK from Iraq.

Touching on the upcoming elections in Iraq, Duman said that the stance of the new government formed after the elections on May 12 will be important as well.

"With the list he prepared, Iraqi Prime Minister Haidar al-Abadi appears to be lucky in the elections," he said.

Meanwhile, it has been reported that the Mosul local council has given PKK terrorists a 10-day ultimatum to leave the Sinjar district. Council chairman, Bashar al-Kiki said that government buildings in Sinjar were under the control of PKK terrorists.

"The council does not accept their presence and is exerting efforts to expel them from the district," he said.

Duman said that eliminating the PKK is more significant for Turkey than dislodging them from Sinjar.

"Turkey's expectation is the elimination of the terrorist group in Iraq. Turkey will continue the process that it started even if it has to take steps on its own," he said.

He added that the view of the U.S. on an operation in Iraq might be significant as the arms provided to the Syrian Democratic Forces (SDF) have been transferred through Sinjar using the Fishabur border gate. However, he reiterated that Turkey is decisive in its fight against PKK and will take all necessary steps to eliminate it from the region.