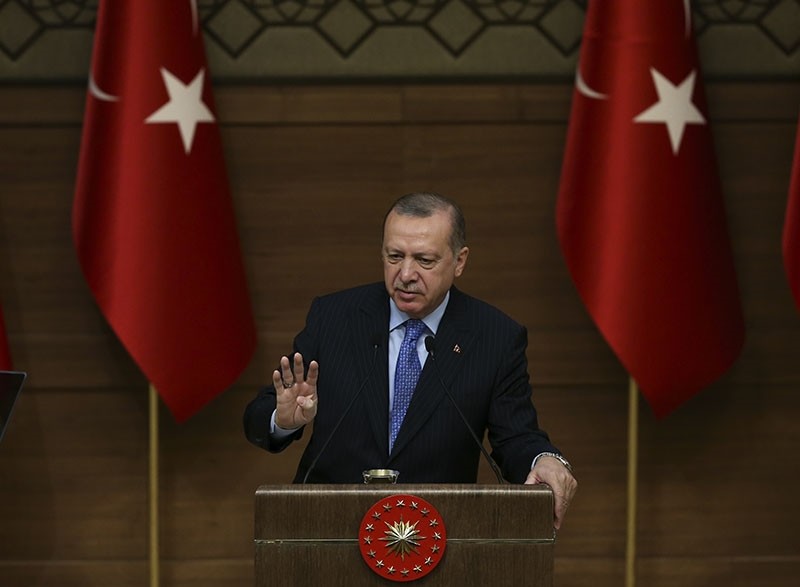 Speaking during a weekly meeting with local headmen at the Presidential Complex in Ankara, Erdoğan noted that civilians are being led out through a special corridor, despite obstructions by YPG militants aiming to use them as human shields to prevent Turkish air and artillery strikes.

Later on Wednesday, the president said that a total of 3,486 terrorists have been "neutralized" and around 1,300 square kilometers has been cleared of YPG/PKK elements, as of day 54 of Operation Olive Branch.

Since the launch of Operation Olive Branch, the Turkish military and FSA have liberated a total of 235 locations, including five town centers - Raju, Bulbul, Sheikh Hadid, Jandaris, Sherran and Mabatli - 194 villages, 39 strategic mountains and hills, and three YPG/PKK bases.

Earlier on Wednesday, the Turkish General Staff announced that at least 3,444 terrorists had been "neutralized" in Operation Olive Branch, which was launched in northwestern Syria's Afrin on Jan. 20 to remove the PKK/PYD/YPG/KCK and Daesh terrorists.

The operation is being carried out under a framework of Turkey's rights to act in self-defense based on international law, U.N. Security Council resolutions, and the U.N. charter while showing respect for Syria's territorial integrity.

According to the Turkish General Staff, the operation aims to establish security and stability along Turkey's borders and in the region as well as to protect Syrians from terrorist oppression and cruelty. The military also said that it was placing "utmost importance" on preventing civilian casualties.

The operation in Afrin, which borders Turkey's Hatay and Kilis, was long expected after Turkey's Operation Euphrates Shield in northern Syria cleared Daesh terrorists from Turkey's border between Aug. 24, 2016, and March 2017.

Afrin has been a major hideout for the YPG/PKK since July 2012, when the Assad regime in Syria left the city under the terror group's control without any confrontation.