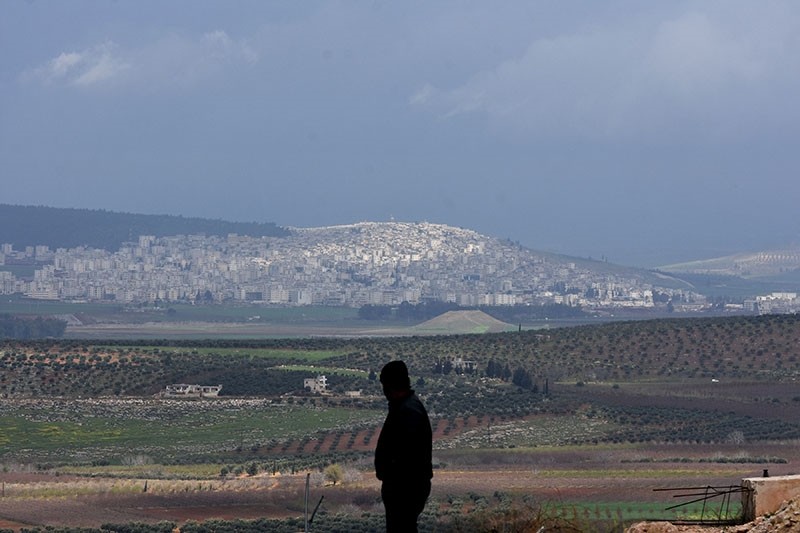 A civilian fleeing the city of Afrin (background) in northern Syria stands at the mountainous road of al-Ahlam as he heads towards the check point in az-Ziyarah, in the regime-controlled part of the Aleppo province, on March 15, 2018. (AFP Photo)
by Daily Sabah with AA Mar 16, 2018 12:00 am

The Turkish military dropped Friday leaflets on northwestern Syria's Afrin, urging locals to not allow themselves to be used as human shields and stay away from PKK-linked People's Protection Units (YPG) terrorist targets and saying that those who want to leave are under the protection of the Turkish Armed Forces (TSK).

With the latest advancement, the Turkish army and the FSA have assumed control of at least three-fourths of the city from the PKK's Syrian affiliates, the People's Protection Units (YPG).

Since the launch of Operation Olive Branch, the Turkish and FSA forces have liberated some 261 locations, including 217 villages and 44 strategic mountains and hills.

President Recep Tayyip Erdoğan confirmed Friday that three-fourths of Afrin has so far been liberated in Operation Olive Branch.

Speaking at a local congress of the ruling Justice and Development Party (AK Party) in Erzurum, Erdoğan said Turkey has solved the Afrin issue to a great extent.

Meanwhile another statement by the military released earlier in the day said that at least 3,530 terrorists have been "neutralized" in Operation Olive Branch since it was launched on Jan. 20.

Operation Olive Branch was launched by Turkey to remove the PKK/PYD/YPG/KCK and Daesh terrorists from Afrin in northwestern Syria.