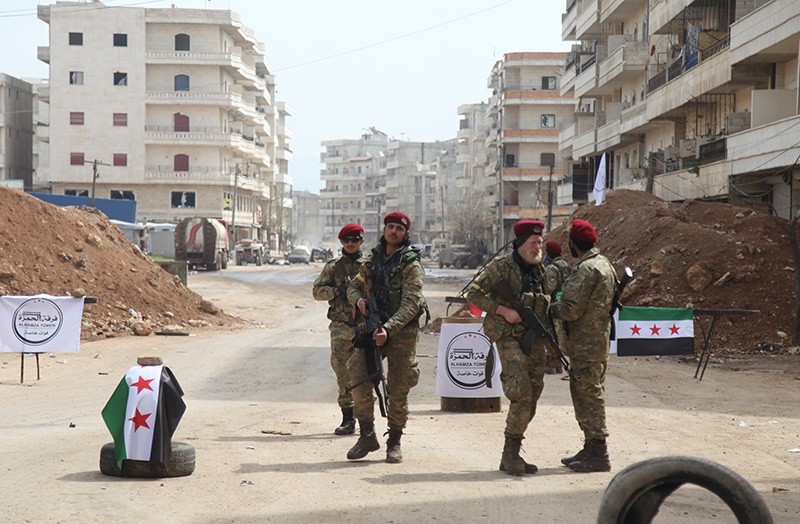 Seven civilians and four members of the Free Syrian Army (FSA) were killed after a bomb planted by People's Protection Units (YPG) terrorists exploded in a four-story building in Afrin town center in northern Syria.

The massive explosion, which blasted a pit 4 meters (13 feet) deep, also destroyed many vehicles and buildings in the area.

Afrin resident Nasser Fuad, who lost two nephews in the explosion, expressed his disgust at the YPG who have terrorized the town.

"We were delighted to see [the YPG] go, but even while they were leaving, they did not leave us in peace. My nephews' family is in a very bad situation, we do not know what to do. We cannot even get the corpses," Fuad told Anadolu Agency.

As part of Operation Olive Branch, launched Jan. 20 to clear YPG/PKK and Daesh terrorists from the Afrin region, Turkish Armed Forces and FSA on Sunday entered Afrin town center and liberated it from terrorists.

Presidential Spokesperson Ibrahim Kalın said yesterday that an important step is completed in Afrin but there is "still lot to do" in the town, including clearing explosives and mines and providing humanitarian aid.

"Afrin is a large town with approximately 400,000 population. We are working with locals to meet their needs," Kalın said British Sky News television.

Stressing that the areas cleared with Operation Euphrates Shield were handed over to locals, Kalın said the same process will be applied in Afrin. "About 150,000 refugees returned to the areas cleared of Daesh with Operation Euphrates Shield. This became a sole example in the 7-year-long Syrian civil war. The people who fled Afrin due to YPG persecution also started to return their home now," he said.

Kalın also underlined that the operation resulted in minimum civilian casualties. "The operation was meticulously carried out to prevent civilian losses. Our military was very prudent regarding airstrikes. If you would look the post-operation photos of Afrin, you will notice the city has not suffered any damage." the presidential spokesperson said.