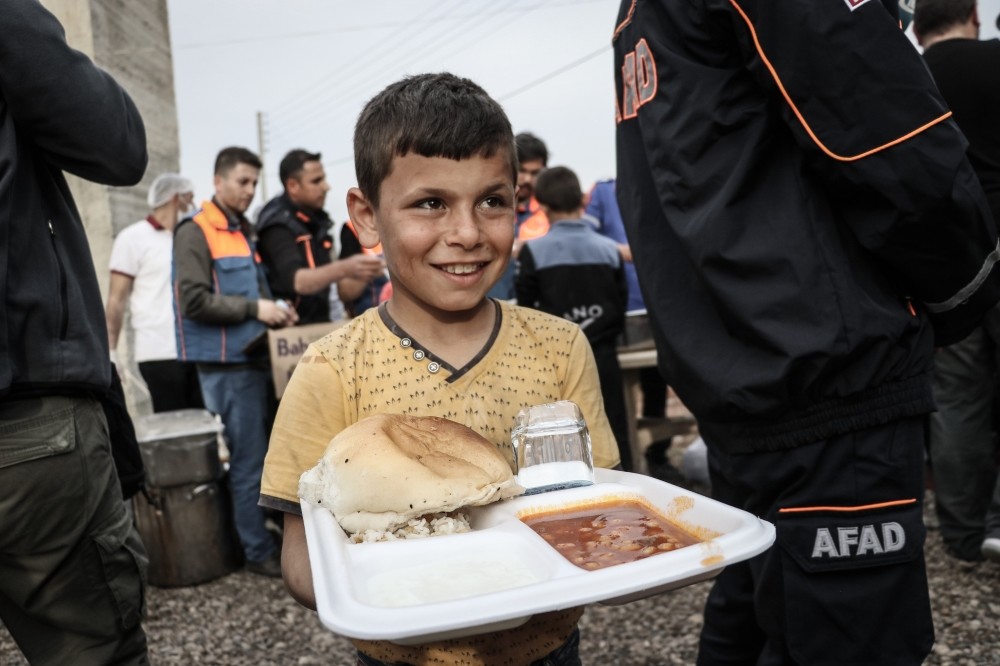 Hot meals and food packets were distributed to civilians returning to their homes in Jinderes and to the nearby villages of Deir Ballut, Mahmudiyah and Hajilar after the Turkish Armed Forces (TSK) and the Free Syrian Army (FSA) liberated the area, Akbaş said.

Speaking on the liberation of Afrin's city center from the People's Protection Units (YPG), which was announced on Sunday, AFAD Director Mehmet Güllüoğlu said that if de-escalation zones could be established in Afrin and Idlib, citizens who want to return to the region could then do so safely.

"We will monitor the restoration of agriculture, trade and other services there all together. However, for now, we are taking the first step [in the process]. Our work providing food, sanitary products, water and other needs continue in cooperation with the Turkish Red Crescent and other institutions," he said, while adding it is not clear how many people are planning to return to the Afrin region yet.

Emphasizing that for the ones who would like to return to their homes safely, it is crucial to provide an atmosphere that is livable with a functioning infrastructure, Güllüoğlu said after these are re-established, people will eventually want to return to their villages.

"Thanks to Operation Euphrates Shield, approximately 160,000 people have been able to return to their own villages, towns and hometowns," he said, while adding that these returns started sometime after the operation ended due to lingering security concerns.

Turkey launched Operation Euphrates Shield in August 2016 against the Daesh terrorist group in northern Syria and liberated the northern Syria towns of Jarablus, al-Rai, Dabiq and al-Bab, enabling locals who fled to Turkey to return to their homes safely.

"We became familiar with this process through Operation Euphrates Shield. Citizens did not return immediately after the operation ended. A process is needed to clean up those places and to re-establish services like health, education, religious services, water and electricity," Güllüoğlu expressed, while underlining that they expect a similar process after Operation Olive Branch's completion as well. The U.N. has called the refugee crisis caused by the Syrian civil war, which broke out in March 2011, the worst humanitarian crisis since World War II. It is estimated that as many as 500,000 Syrians have been killed and 5.6 million displaced. As a neighboring country, Turkey has welcomed refugees fleeing the war and has called on the international community to recognize the urgency of the crisis. Currently, Turkey hosts more than 3.5 million Syrian refugees, making the country number one among the host countries in terms of numbers.