Turkey resolute in eradicating PKK/YPG terrorism south of the border 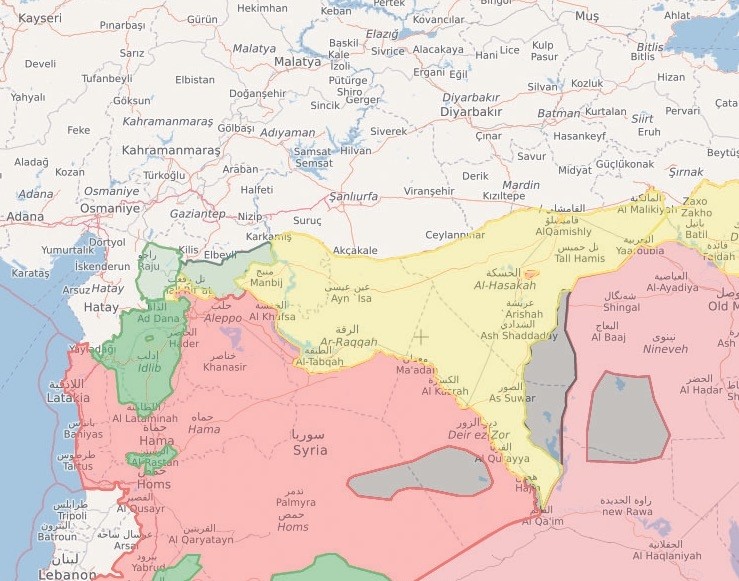 President Recep Tayyip Erdou011fan said that the Afrin operation will continue until the terror corridor through Manbij, Tell Abyad and Sinjar have been wiped out.
by Daily Sabah Mar 21, 2018 12:00 am

On Jan. 20, the Turkish Armed Forces (TSK) and Free Syrian Army (FSA) launched an operation in the Afrin region to clear YPG terrorists from the area and announced Sunday that Afrin, including the city center, was taken completely under control by TSK and FSA forces. However, the YPG, the armed wing of the Democratic Union Party (PYD), still controls a significant amount of land in northern and northeastern Syria, including Manbij and areas east of the Euphrates River, a field reality that Ankara says constitutes a national security threat.

On Monday, President Recep Tayyip Erdoğan said the Afrin operation will not end now that the province is cleared of the YPG, but that it will "go on until the terror corridor through Manbij, Ayn al-Arab, Tal Abyad, Ras al-Ayn and Qamishli have been wiped out." With the current operation, Turkey has now blocked the YPG's aim of establishing an autonomous region in northern Syria.

The YPG gained its military strength with the support of the United States under the pretext of fighting Daesh in Syria despite the group's organic organizational and ideological links to the PKK terrorist organization. The PKK is listed as a terror group by the U.S., the EU and Turkey.

Washington's decision to arm and support the PKK's Syrian affiliate angered Ankara, bringing Turkish-U.S. ties to a historic low. Turkish authorities called on the U.S. to withdraw the YPG from the western parts of the Euphrates to the east, as well as from Manbij, an offer Washington agreed to. However, the promise made to Ankara was never realized. There is also a strong U.S. military presence in the Manbij region. In addition, the U.S. also did not follow through with its promise to retrieve the weapons it provided to the YPG.

Erdoğan also hinted at another operation against the PKK terror group in the Iraqi city of Sinjar. "We could suddenly come over one night to Iraq's Sinjar and eliminate the PKK terrorists there," the president said.

In mid-2014, the PKK managed to establish a foothold in Sinjar on the pretext that it was protecting the local Yazidi community from Daesh. Last week, the Mosul local council gave PKK terrorists a 10-day ultimatum to leave northern Iraq's Sinjar district, according to a council chairman.

According to intelligence sources, the PKK has moved its military resources and command-control mechanisms from the Qandil Mountains in northeastern Iraq to Sinjar in the northwest.

The Qandil Mountains, located roughly 40 kilometers southeast of the Turkish border in Iraq's Irbil province, is being used as the headquarters of the PKK and its Iranian affiliate, the Kurdistan Free Life Party (PJAK), although the area is under de jure control of the Kurdistan Regional Government (KRG). The area has frequently been hit by the TSK in the last decade.

Erdoğan said Ankara has been communicating its concerns over the PKK presence in northern Iraq, particularly in Sinjar province. "If it [Iraq taking steps against the PKK presence within its territory] takes too long, then we can launch an 'Olive Branch' there too," the president said.