Children in Afrin happier with town liberated from YPG terrorists 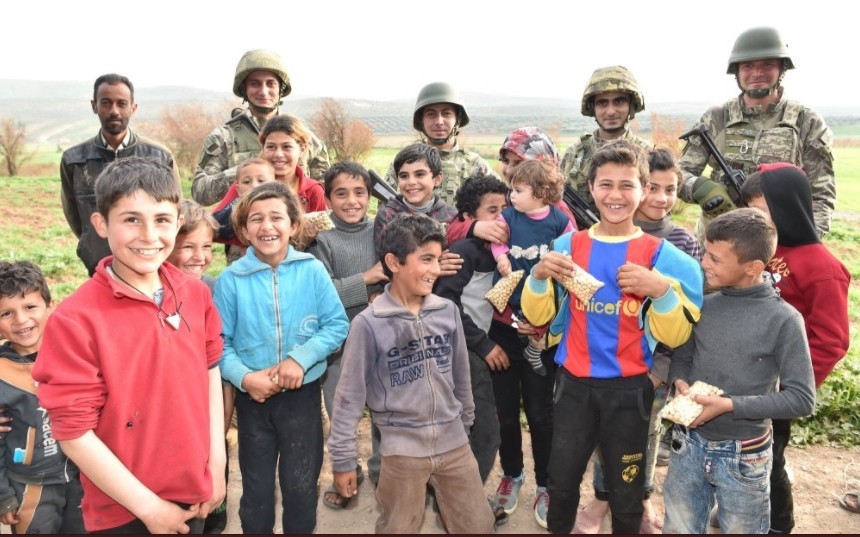 Children in Afrin are happier with the presence of the Turkish Armed Forces (TSK), which liberated the city from the PKK's Syrian-affiliated People's Protection Units (YPG).

Entering the city Sunday, Turkish soldiers are now making children in Afrin smile with their compassion. Sharing the photographs from the city on their social media account yesterday with the title of "Clean hearts are together," the TSK showed the happiness of the children to the whole world.

Luay Fehmen, 10, who lives in the Kefr Jana village, said they returned to their village after the Turkish military cleared the region from terrorists.

"We are playing here. The weather is beautiful. We built a swing on a tree and we are having fun," said Fehmen while playing with her brother and friends.

Muhammed Ahmed, who is 11 years old, also expressed that it has been almost a month since they came to the village and although he enjoys life there, he wishes to go back to his hometown as soon as possible.

"People from Turkey came here and helped us. They gave us toys. Thank God for them," he added.

On Sunday, Turkish-backed troops liberated Afrin's town center, which had been a major hideout for the YPG since 2012.

In a statement posted on their Twitter account, the TSK said the terrorists were handed over to the military by local residents and village heads in nine different villages.

The number of terrorists that have been killed so far during the operation reached 3,698, President Recep Tayyip Erdoğan confirmed yesterday during his speech in Ankara.

On Jan. 20, Turkey launched Operation Olive Branch to remove the YPG/PKK and Daesh terrorists from Afrin.

According to the Turkish General Staff, Operation Olive Branch aims to establish security and stability along Turkey's borders and the region as well as protect Syrians from terrorist-inflicted cruelty and oppression.