'US needs to hand over Manbij from YPG terrorists to its true owners': Erdoğan 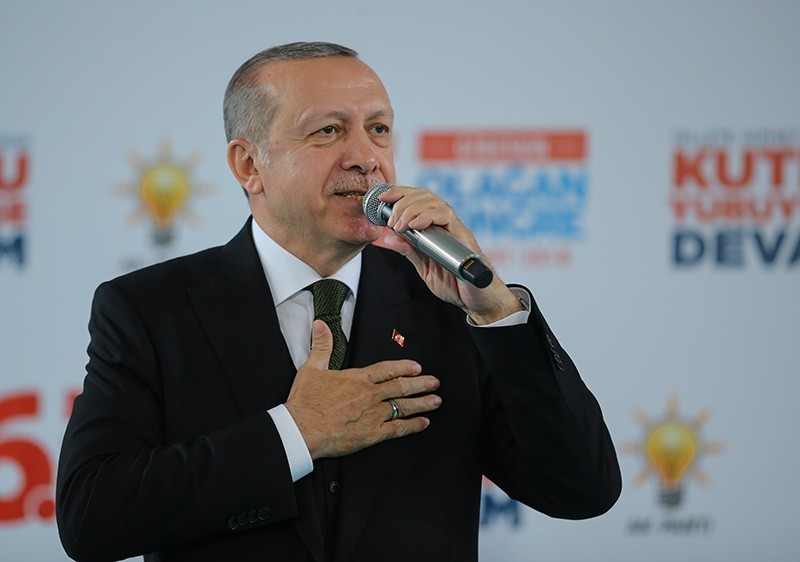 President Recep Tayyip Erdoğan on Sunday called on the United States to hand over Manbij in northern Syria to the Syrian people, assuring that if the U.S. fails to do so, Turkey will step in to clear People's Protection Units (YPG) terrorists from the region.

"The U.S. needs to hand over Manbij from YPG/PKK terrorists to its true owners, the Syrian people," Erdoğan said Sunday at a gathering of the Justice and Development Party (AK Party) in Turkey's northern Trabzon province.

"If the YPG terror group is not removed from Manbij, we will be forced to remove them with the support of the local Syrian people," he added.

"We will clear Tal Rifat from YPG/PKK terrorists to complete Operation Olive Branch," the Turkish President said, referring to the Turkish military operation which began on Jan. 20 to clear YPG and Daesh terrorists from the region, successfully liberating the town center of Afrin on March 18.

The northern Syrian city of Manbij has been one of the most hotly debated points of contention between Ankara and Washington.

As part of a recent rapprochement between the two NATO allies, Ankara looks to establish an agreement that would lead to the withdrawal of the YPG from Manbij and the future administration of the city.

Foreign Minister Mevlüt Çavuşoğlu said earlier this month that there has been a mutual understanding on the need for a roadmap, but no deal has been finalized yet with the U.S.

According to Turkish officials, Turkish and U.S. troops would ensure security in Manbij once the YPG withdraws and the two countries would monitor the withdrawal process.

Ankara has been arguing that the future administration of Manbij should reflect the demographics of the province, determined according to a census before the civil war broke out and the YPG took control, which was predominantly Arab.