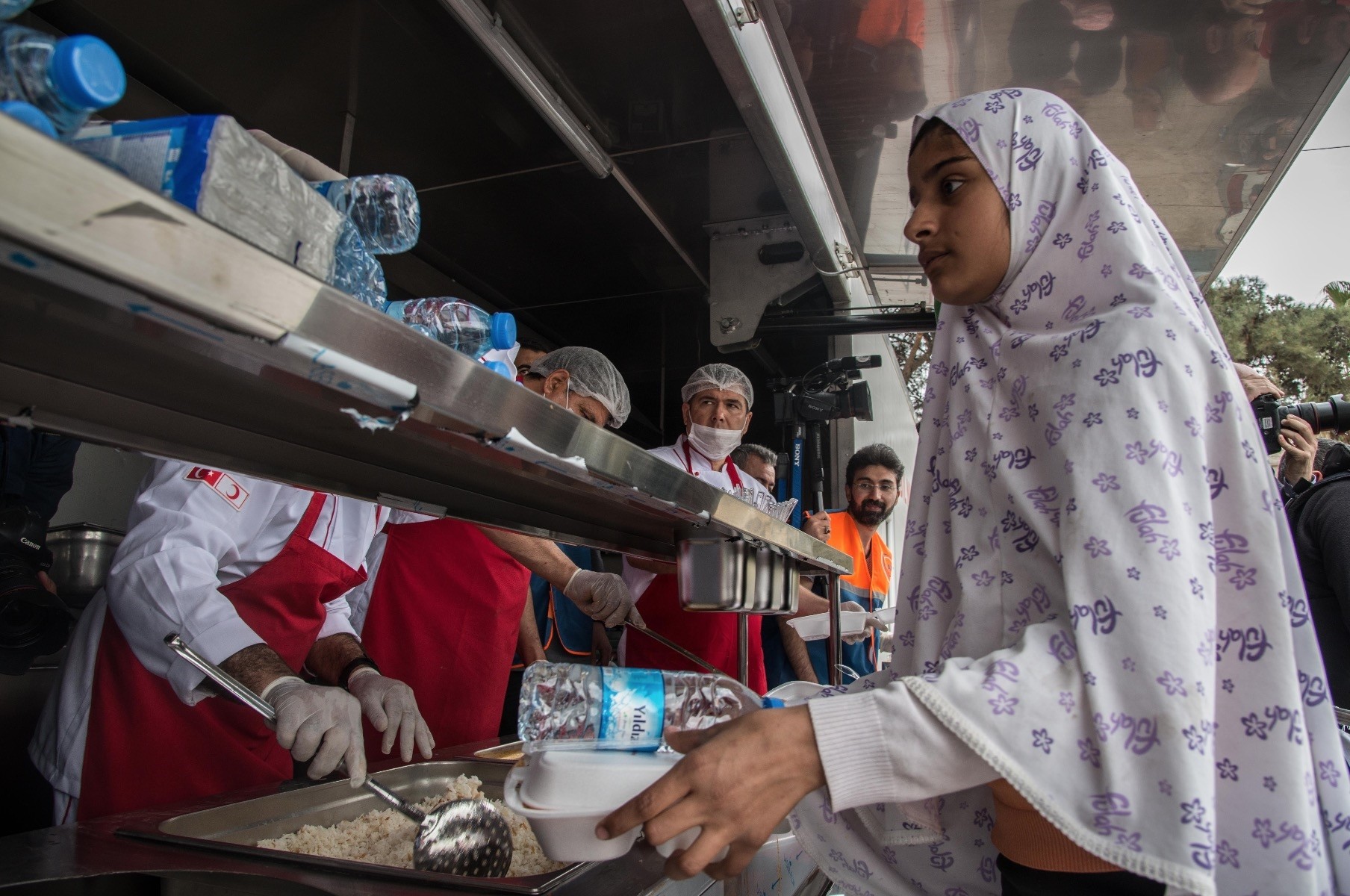 Turkish Red Crescent President Kerem Ku0131nu0131k said that his organization put a mobile kitchen and a mobile bakery into action which distribute food to 5,000 people on a daily basis.
by Yunus Paksoy Mar 26, 2018 12:00 am

Turkey intensified humanitarian aid efforts in recently liberated Afrin by mobilizing state institutions, including the Red Crescent and the Disaster and Emergency Management Presidency, to provide food and help hospitals and water services return to normal

The Turkish Red Crescent provided humanitarian aid and warm food to the people of Afrin over the weekend as the humanitarian organization vowed to meet the needs of every single person in the region and help hospitals and water services return to normal.

Picking up the pace in terms of quickly and efficiently delivering humanitarian aid and basic needs to the people of Afrin after the town was liberated by the Turkish Armed Forces (TSK) and the Free Syrian Army (FSA) from the PKK-affiliated People's Protection Units (YPG), the Turkish Red Crescent distributed warm meals to thousands of locals over the weekend.

People waited in long queues to be served at the town center, which witnessed the historic moment on March 18 as Turkish soldiers announced the victory over the YPG. 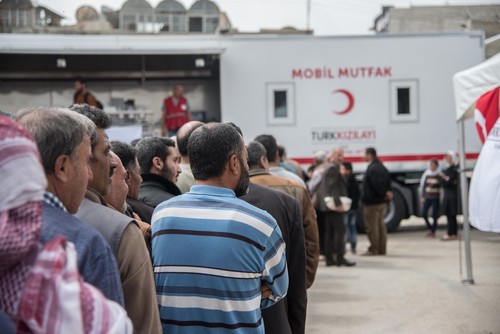 Emphasizing that the Turkish Red Crescent and Turkey's Disaster and Emergency Management Presidency (AFAD) mobilized following the liberation of Afrin, Red Crescent President Kerem Kınık, said that his organization put a mobile kitchen and a mobile bakery into action. "Food for 5,000 people is distributed per meal. We are in a position to be able to do it twice a day," Kınık said.

As the people in the town find themselves in a dire situation, many locals spoke of the YPG's ruthless rule in the area for years, which led to unemployment and excessive levels of poverty. Vowing to note the needs and requests of the people in each and every village and district, the Turkish Red Crescent president said that the list is about to be completed. 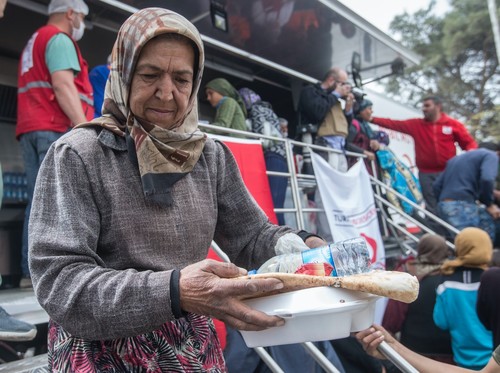 "We determined very quickly the need for medical services. We will make sure hospitals function again very swiftly," Kınık said. When asked about how many people will be cared for by the Turkish Red Crescent, he said that the primary intended population is less than 100,000 people in Afrin. However, he stressed that his organization will strive to help tens of thousands of people who had to flee YPG oppression return home. "We will do our very best to make life return to normal here in Afrin," Kınık said.

AFAD also recently distributed food after the announcement of the liberation. "We will monitor the restoration of agriculture, trade and other services all together. However, for now, we are taking the first step [in the process]. Providing food, sanitary products, water and other needs continue in cooperation with the Turkish Red Crescent and other institutions," AFAD Director Mehmet Güllüoğlu said last week.

Water shortages also cripple life in Afrin aside from poverty and hunger. Touching on this problem as well, Kınık said that a dam that used to provide the town with water has been out of service for a while. "Turkey's General Directorate of State Hydraulic Works (DSI) determined the problem and they are continuing their work to fix it," he added.

As humanitarian efforts have intensified in recent days, the Turkish state is also working around the clock to make sure that the people in the town are safe and sound. Moreover, schools have been renovated and local administrations are being established as soon as possible to give the people of Afrin a secure and orderly life.

The Turkish military kicked off Operation Olive Branch on Jan. 20 in cooperation with the FSA to liberate the Afrin region from YPG/PKK elements. Afrin has been a major base of operations for the PKK terrorist organization's Syrian affiliate, the Democratic Union Party (PYD), and its armed wing, the YPG, since July 2012. Since then, Turkish borders have been targeted many times by the terrorist group. Exercising its right to self-defense under

the United Nations charter, the Turkish army began the operation. In less than 60 days, the operation prevailed against the YPG.

The Turkish state is expected to implement a system in Afrin similar to those in Jarablus and al-Bab, which were liberated from Daesh during Operation Euphrates Shield.