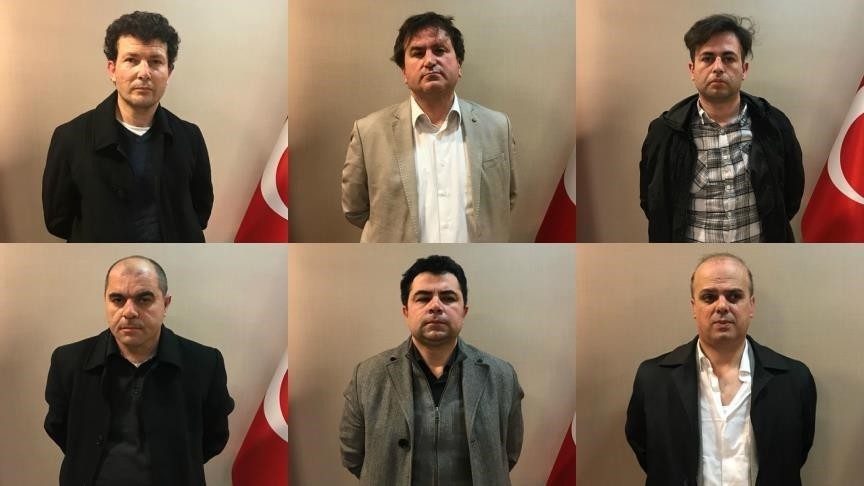 Six executives of the Gülenist Terror Group (FETÖ) in the Balkans were arrested Thursday in Kosovo and brought to Turkey in a joint operation by the Turkish and Kosovar intelligence services.

The suspects, who were being sought by Turkey, were officially in charge of the FETÖ-run private "Gülistan" and "Mehmet Akif" school networks in Kosovo.

The sources told AA that the suspects were in charge of all FETÖ activities in the region, as well as trafficking FETÖ members from Turkey to the U.S. and European countries, where the terrorist group maintains a strong presence.

Özkan was in charge of collecting tithes from FETÖ members in the Balkans and transferring the terrorist group's shares to the U.S. state of Pennsylvania, where FETÖ leader Fetullah Gülen has been residing since 1999.

Günakan was the key figure in hiring teachers to the schools.

Karakaya assumed an active role in the Ergenekon sham trial launched by FETÖ-linked prosecutors and police officers targeting the officer corps and the chain of command of the Turkish Armed Forces (TSK). During the trial, Karakaya prepared reports in favor of FETÖ at the Istanbul Forensic Medicine Institution. FETÖ members used the Ergenekon and Sledgehammer (Balyoz) trials to infiltrate into the TSK, and a majority of officers and non-commissioned officers who took part in the July 15, 2016 coup attempt, which left 250 civilians killed and 2,200 others injured, were appointed to crucial command posts after these trials.

A police statement said raids connected to the arrests were continuing.

Nazi Ulus, a principal of one of the Gülen-linked schools, told Reuters that one of the arrested Turks, Mustafa Erdem, was the director of all Gülen schools in Kosovo. He had no further information.

Kosovar Prime Minister Ramush Haradinaj only confirmed to reporters that the expired residence permits were the cause of their detention.