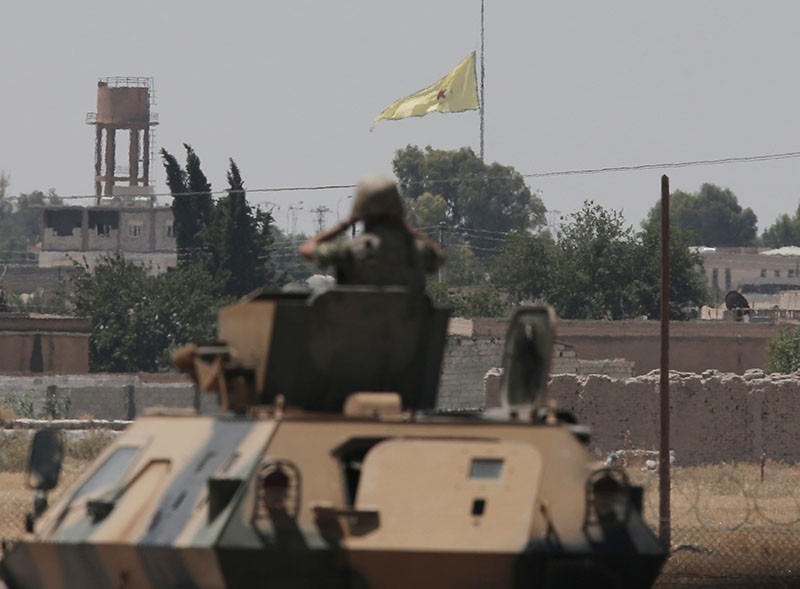 In this photo taken in Aku00e7akale, SE Turkey, a Turkish soldier on an armored personnel carrier watches as in the background a flag of the PKK-linked YPG, is raised across the border over the city of Tal Abyad, Syria, Tuesday, June 16, 2015. (AP Photo)
by Daily Sabah Mar 30, 2018 12:00 am

Addressing ruling Justice and Development Party (AK Party) provincial chairpersons in Ankara, Erdoğan said Turkey has no intention of harming soldiers of allied nations positioned in the region, but that it could not allow militants to roam free.

The U.S. supports the YPG-dominated Syrian Democratic Forces (SDF), which its NATO ally Turkey regards as the extension of the PKK terrorist group. U.S. troops are positioned alongside YPG terrorists in Syria's Manbij.

French President Emmanuel Macron said on Thursday it had assured the YPG of its support to stabilize northern Syria, prompting harsh reactions from Ankara.

Erdoğan reminded that Afrin region in northern Syria has been completely liberated by Turkish and Free Syrian Army (FSA) forces, adding that at least 3,800 terrorists have been "neutralized" in Operation Olive Branch since it was launched in northwestern Syria's Afrin.

Erdoğan noted that the TSK also established 7 out of 12 control points in Syria's opposition held Idlib, which were agreed in a deescalation deal between Turkey, Russia and Iran.

The president underlined that Turkey will continue to protect the victims of the Syrian war, adding that it would not take a step back in its anti-terror operations.

Operation Olive Branch was launched by Turkey on Jan. 20 to remove the PKK/PYD/YPG/KCK and Daesh terrorists from Afrin in northwestern Syria, which had been a major hideout for the YPG/PKK since 2012 when the Assad regime in Syria left the city to the terror group without putting up a fight. On March 18, Turkish-backed troops liberated the town center of Afrin.