US military buildup in Manbij amid Turkey’s offensive signal 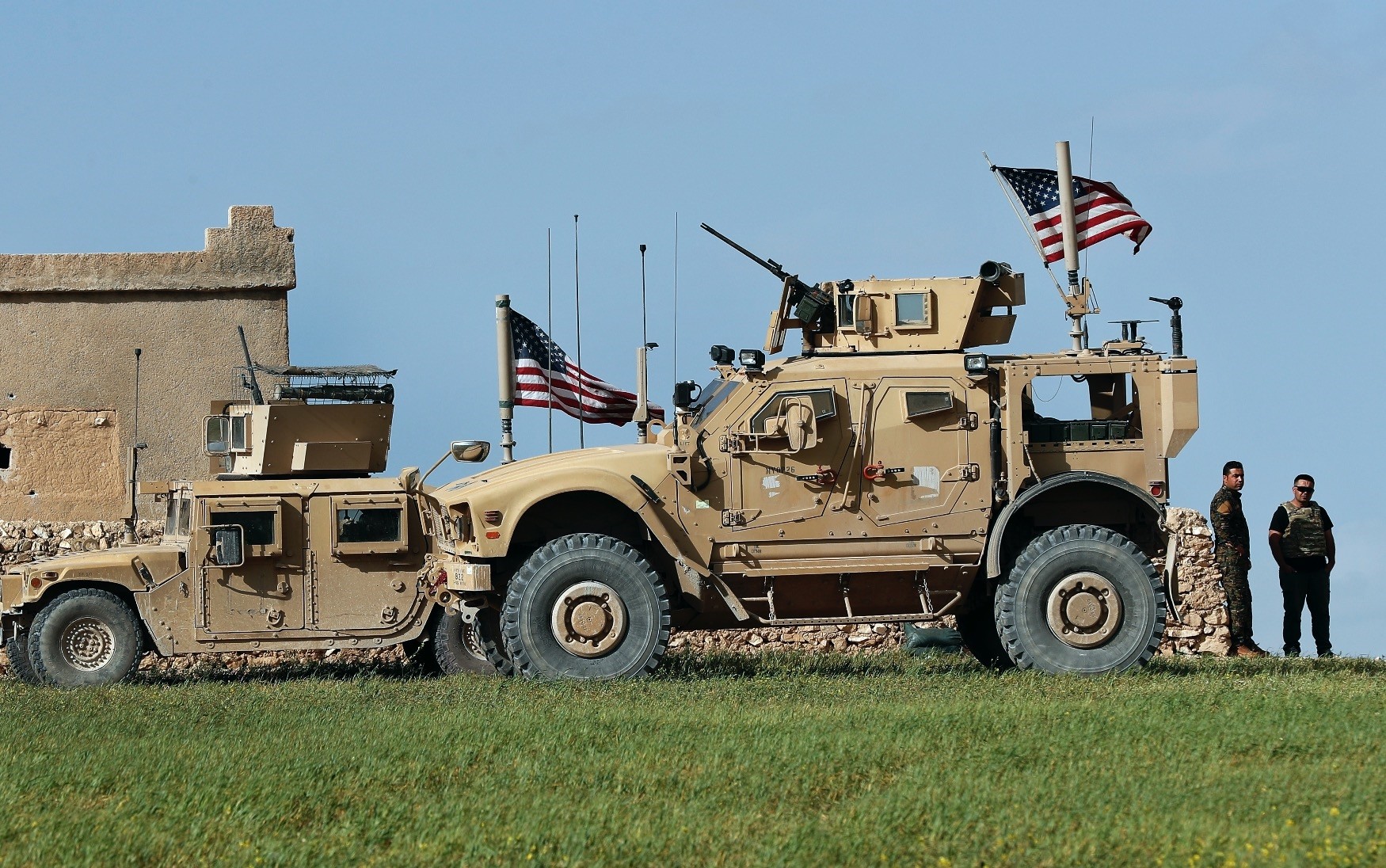 A U.S-backed Syrian Manbij Military Council fighter, 2nd from right, stands next to a U.S. Humvee vehicle at a U.S. outpost on a road leading to the tense frontline between their fighters and the Turkish-backed FSA, at Halawanji village
by Daily Sabah Apr 02, 2018 12:00 am

The U.S. has strengthened its military presence in Syria's Manbij, where Turkey says it will conduct an operation to eliminate YPG terrorists, leading to fears of a possible clash between the two NATO allies

The U.S. is intensifying its military presence in northern Syria's Manbij district, controlled by the PKK's Syrian affiliate, where Ankara said it will launch an offensive to eliminate terrorists posing a threat to Turkey, if they continue to stay in the region. Approximately 300 U.S. soldiers arrived in Manbij, west of the Euphrates River, in a convoy which included many armored vehicles and construction machines, Anadolu Agency (AA) reported, citing local sources. As Operation Olive Branch in Syrian northwestern Afrin, launched on Jan. 20, is coming to a completion, Turkey has vowed to take unilateral action against the terrorist PKK-linked People's Protection Units (YPG) if they continue to remain in Manbij and the eastern parts of the Euphrates River.

On March 18, the Turkish Armed Forces (TSK) and Free Syrian Army (FSA) liberated the town of Afrin, a major hideout for the terrorist organization since 2012. However, the clearing of explosives in the province is currently underway.

The Manbij district was invaded by the YPG/PKK terror group in Aug. 2016 with U.S. support. The presence of the YPG, the armed wing of the Democratic Union Party (PYD), in northern Manbij and the eastern parts of the Euphrates, coupled with continuous U.S. support to the group, has intensified tensions Turkey's relations with the U.S., the main backer of the group, under the pretext of the fight against the Daesh terrorist group. During former U.S. President Barack Obama's term, Washington promised that the U.S. will halt its support to the PYD and ensure the withdrawal of the group from Manbij and eastern Euphrates; however, this promise has not been kept.

The reinforcement in Manbij by the U.S. ahead of an expected Turkish operation on Manbij has also increased fears of the two NATO allies possibly clashing against each other, despite the recent diplomatic steps taken by Turkish and U.S. officials to overcome disagreements on Manbij. The abrupt departure of former U.S. Secretary of State Rex Tillerson, who helped establish the working groups, has also added to the ambiguity in the future plans for Manbij.

According to Turkish officials, Ankara demands that Turkish and U.S. troops would ensure security in Manbij once the YPG withdraws and the two countries would monitor the withdrawal process. Ankara has been arguing that the future administration of Manbij should reflect the demographics of the province, determined according to a census before the civil war broke out and the YPG took control, which was predominantly Arab.

There are roughly 2,000 U.S. troops in Manbij and a dozen U.S. military bases in northern Syria, according to unofficial sources. The U.S. has backed the YPG, which functions under the Syrian Democratic Forces (SDF), in the fight against Daesh, despite the group being organically linked with the PKK terrorist group. The PKK is listed as a terrorist organization by the U.S., the EU and Turkey. Trump says early exit from Syria, freezes funds for SDF areas Last week, U.S. President Trump made a surprise announcement, saying the U.S. would withdraw from Syria in the near future. However, statements coming from the State Department and the Pentagon raised questions on whether his remarks would translate into action. Trump said at an event in Ohio that the U.S. will withdraw its troops from Syria very soon and let other people take care of it. "We'll b

e coming out of Syria very soon. Let the other people take care of it now [...] We're going to have 100 percent of the caliphate, as they call it, sometimes referred to as land. We're taking it all back." When asked about Trump's withdrawal statement, the Pentagon decided to refer to the White House, while the State Department's Heather Nauert said she was "not aware of" the decision, declining to comment further. In addition, it is not known whether the recent reinforcement in Manbij is part of measures taken against Turkey's possible operation, or a reshuffling planned against Daesh, as many of the YPG terrorists had escaped the region to participate in the fight against Turkey's Afrin operation.

In Syria, Turkey has backed the moderate opposition Free Syrian Army (FSA) in its operations conducted in northern Syria, arguing that a terrorist group cannot be defeated with another one. The YPG's ultimate aim is to establish an autonomous region in northern Syria by connecting the northwestern Afrin canton to the Kobani and Jazeera cantons in the northeast, which the Turkish government considers a "terror corridor." With the continuous operations, Turkey says it will eliminate all YPG terror threats from northern Syria. Previously, President Recep Tayyip Erdoğan voiced his skepticism over the Trump administration, questioning whether or not the U.S.' objection to withdrawing the YPG from Manbij was really Trump's own will.

Amid rumors of a U.S. exit from Syria, an article in The Wall Street Journal, published on Friday, has also claimed that more than $200 million in funds, allocated for recovery efforts in SDF-held areas, has been frozen by President Trump. U.S. officials were quoted by the newspaper as saying that the Trump administration "reassesses Washington's broader role in the protracted conflict there." Officials also told the newspaper the White House ordered the State Department to put spending on hold following Trump's surprise announcement on exiting from Syria. The Wall Street Journal said the shift comes as the fight against the Daesh terror group "has stalled."

The money was initially pledged by departing Secretary of State Rex Tillerson in February during a meeting in Kuwait of the U.S.-led anti-Daesh coalition.