Operations against YPG to continue until west of Euphrates is cleared 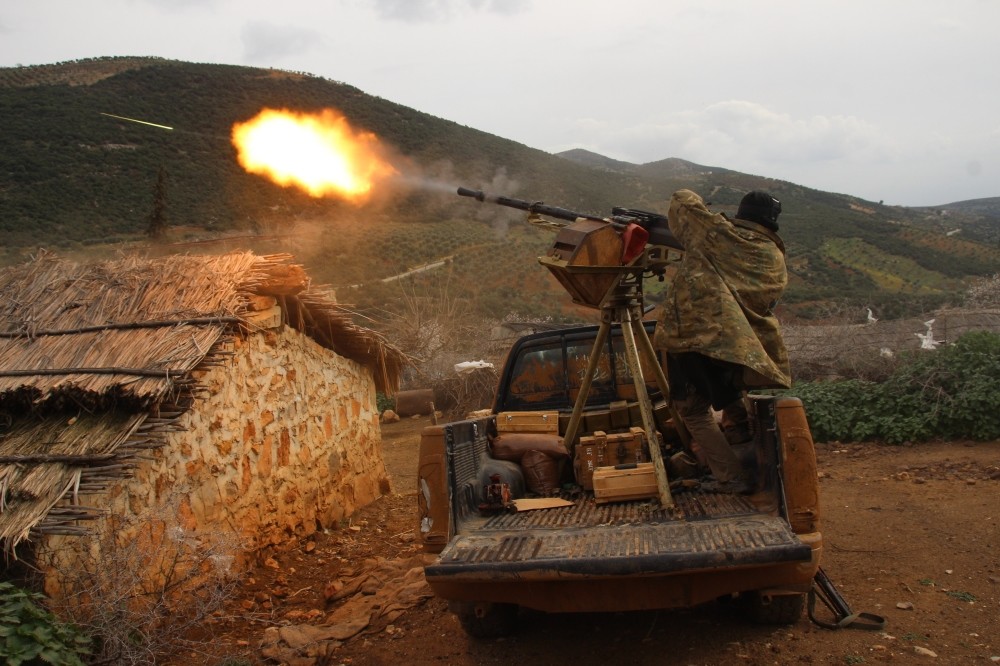 Turkey launched Operation Olive Branch on Jan. 20 with the aim to liberate Afrin from terrorists, which was achieved on March 18 when the Turkish Armed Forces (TSK) and Free Syrian Army (FSA) took control of the Afrin city center.
by Daily Sabah Apr 03, 2018 12:00 am

Officials from Turkey have been stressing that Operation Olive Branch will continue until all terrorists are eliminated west of the Euphrates, including strategic regions such as Tal Rifat, Afrin.

Speaking in a televised interview yesterday, Deputy Prime Minister Fikri Işık highlighted the significance of eliminating terrorists from Tal Rifat to complete Operation Olive Branch. "Tal Rifat, which connects the regions of Operation Euphrates Shield, Operation Olive Branch and Idlib, is a strategic location. Thus, it is a strategic goal for Turkey to clear Tal Rifat of the Democratic Union Party/People's Protection Units (PYD/YPG). I believe this goal will be reached in a short time," Işık said.

As President Recep Tayyip Erdoğan signaled previously, Tal Rifat is considered a natural extension of Turkey's Operation in Afrin, which was launched on Jan. 20 to clear YPG and Daesh terrorists from the region, successfully liberating the town center of Afrin on March 18. In relation to the issue, the president said, "We will clear Tal Rifat of YPG/PKK terrorists to complete Operation Olive Branch." Tal Rifat, which is 35 kilometers from Aleppo city center, is currently controlled by the YPG. The region was captured by the YPG in February 2016, expelling Daesh from the town when Tal Rifaat came under heavy aerial bombing during the siege of Aleppo by regime and Russian forces. After the PYD set up local councils affiliated to its "Afrin canton" to manage the city, some Tal Rifat residents fled to refugee camps in the town of Azaz in northern Aleppo. In addition to eliminating terrorists in Tal Rifat, it is important for Turkey to end the YPG's control over Menagh Air Base, which has been used by the terrorist group to transport ammunition and weapons.

After Turkish Armed Forces (TSK) and the Free Syrian Army (FSA) took control of Afrin city center on March 18, the people of Tal Rifat have been calling on Turkey to eliminate the YPG from their town as well.

Exiled residents of northwestern Syria's Tal Rifat and numerous FSA fighters gathered in northwestern Syria's Azaz to stage a protest earlier this month. They asked Turkey to help liberate their territories and prevent the city from being handed over to the Assad regime. Prior to its operation in Afrin, Turkey had long warned its allies, particularly the U.S., not to partner with the YPG under the pretext of fighting Daesh and called for it to cut off ties with terrorist groups. Despite Turkey's stern warnings, the U.S. has not paid heed to Ankara, which inevitably heightened tension between the two sides. The partnership between the U.S. and the YPG set off a cascade of problems for the U.S. As Daesh recedes as an immediate threat, Turkey expects the U.S. to fulfill its promises over the retreat of the YPG from Manbij. Commenting on the issue, Işık stated: "The issue of Manbij actually is a clear one. Former President Barack Obama and President Donald Trump made a promise to President Erdoğan." He added: "We expect the promise to be fulfilled and the YPG ousted from there. It is our natural right to expect that. If the promise is not fulfilled, it is inevitable for countries to come face to face."