Sisters reunite after suffering 7 years of YPG brutality in Afrin 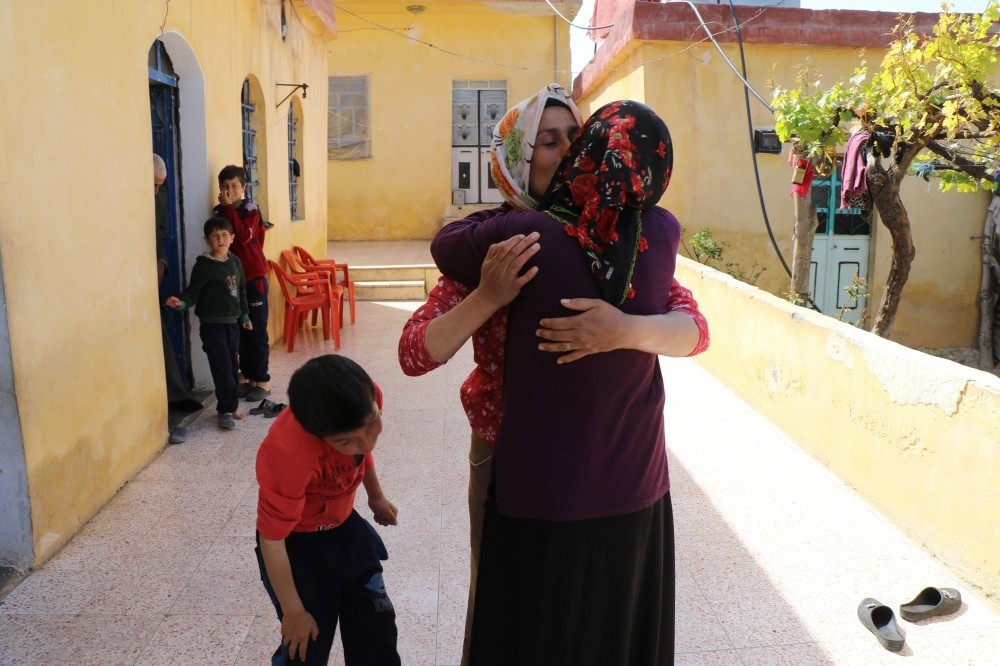 Farida Ahmad, who could not see her sister Najah Ahmad for seven years due to YPG brutality, was able to finally reunite with her sibling after the Turkish Armed Forces (TSK) and the Free Syrian Army (FSA) liberated the city.
by Daily Sabah with IHA Apr 04, 2018 12:00 am

The PKK's Syrian affiliate, the People's Protection Units (YPG), has made life for the past seven years in Afrin miserable by not letting civilians leave the city and purposefully separating families, a local said. Farida Ahmad, who could not see her sister Najah Ahmad for seven years due to YPG brutality, was able to finally reunite with her sibling after the Turkish Armed Forces (TSK) and the Free Syrian Army (FSA) liberated the city.

At the beginning of the Syrian civil war in 2011, YPG forces, the armed wing of the Democratic Union Party (PYD), took control of many areas in northern Syria, including Afrin's city center and its neighboring villages. Establishing its own rule in the region, the terrorist organization handed out new identity cards to the people as a way of legitimizing its power. The YPG even printed their own license plates and forcefully collected taxes from locals. Aiming to mobilize everyone, the terrorists collected 350,000 Syrian pounds ($680) per year from the ones who refused to fight for them. The terrorists also took harsh measures against those who did not take YPG identity cards by forbidding them from leaving the city while asking for large amounts of money from people entering the city in the name of taxes.

The people most affected by this practice were those not registered in the city of Afrin. Farida Ahmad, whose sister left Afrin when she got married 13 years ago to live in Azaz, was able to visit her easily for six years before the YPG took over the city. However, after the YPG established its rule in the region, the sisters were unable to see each other. When Farida Ahmad last saw her sister, she had just given birth to her first son Mahmut. Since then, Farida Ahmad has not been able to see her nephew again, let alone her nephews that were born later. The two sisters were limited to only speaking over the phone for the next seven years.After TSK and FSA forces liberated the city, the sisters could finally look forward to the day that they would see each other again. With the help of the Turkish İhlas News Agency's (İHA) presence in the region, the sisters were finally able to reunite in the village of Bassouta, near Afrin, an emotional experience for not only them but also for those at the scene. After not seeing her sister for seven years, Farida Ahmad fainted in her sister's arms when they were finally able to embrace. Soon after, she was able to meet her nephew for the first time, resulting in another flood of happy tears.

"Thank God, I've reunited with my sister. We've been through so much," she said, referring to the entrance and exit bans enforced by the terrorists. "Many other loved ones were separated like we were. It is like I'm in a dream. I've never met my nephews. I'm seeing them for the first time. I thought my heart would stop," she added.

She further expressed that everyone should be able to visit their family and relatives and to come and go as they please. "People do not know their aunts or grandparents. This is an affront to humanity," Farida Ahmad indicated, while expressing her gratitude to the TSK and FSA forces.

"I've been here for 13 years and could not see my sister for seven. Terrorists drew a line here and did not allow anyone to cross it," Najah Ahmad said, while expressing that she was looking forward to seeing her other siblings as well.

Locals in Afrin have suffered at the hands of the YPG who took over the district from the Bashar Assad regime in 2012 without a fight.

Operation Olive Branch was launched on Jan. 20 to clear PKK affiliates from Afrin, secure its southern border regions and help Syrian refugees return to areas occupied by terrorist groups. On March 18, the town of Afrin was liberated from PKK and YPG terrorists, leaving only a narrow strip, including the town of Tel Rifaat, still controlled by the terrorist group.