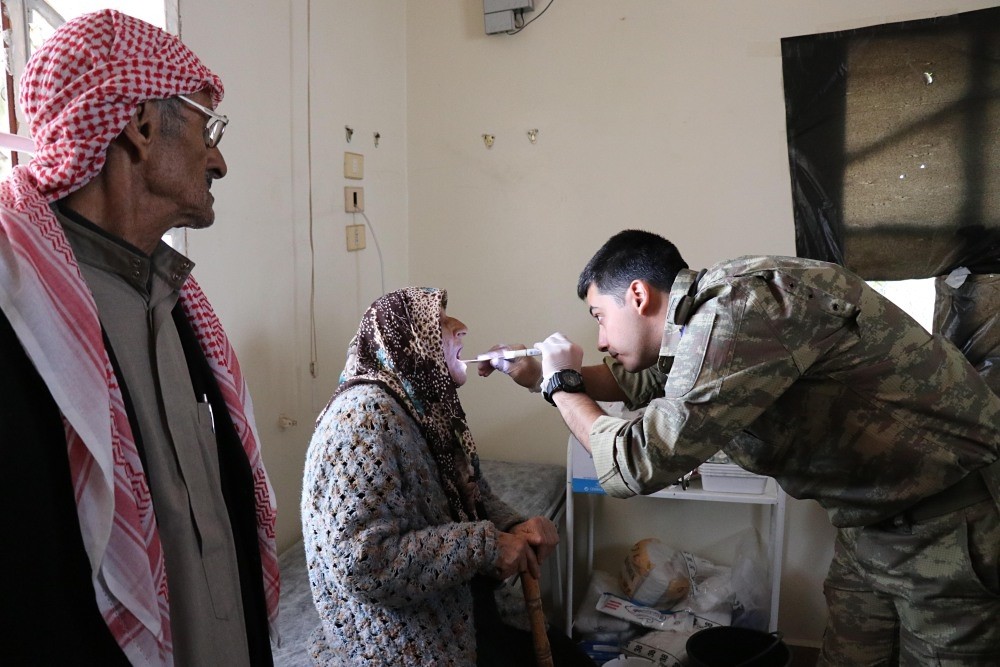 A Turkish officer treats an Afrin local at a medical clinic in rural Afrin.
by Anadolu Agency Apr 14, 2018 12:00 am

After the clearing of YPG elements from northwestern Syria, the Turkish military and FSA are now focused on providing health and security services by establishing medical clinics and control points, including the formation of a multiethnic local council to govern the city

The Turkish army has begun to provide health services to local people in rural areas of Afrin province in northwestern Syria, which was recently cleared of PKK-affiliated terrorists groups in Turkey's Operation Olive Branch.

Since the hospitals in the area are not functioning, Turkish soldiers established medical clinics in several areas in rural Afrin to provide medical services seven days a week, according to an Anadolu Agency (AA) correspondent on the ground.

The soldiers examine the patients and provide medicine. If the patient is extremely sick or suffers from a chronic disease, he or she is sent to Turkey for treatment by ambulance. One of the health centers in Jinderes district's rural area treats 60 to 70 patients a day.

Muhammed Abdi, who brought his daughter to the center, said that Turkish soldiers are distributing food and treating patients and they are thankful to Turkey. In a statement Thursday, Turkey's Health Ministry said 19 doctors and health workers were providing services in Afrin and in Jinderes.

A mobile hospital and two mobile health service vehicles were also set up by the Turkish Health Ministry.

The operation aims to establish security and stability along Turkey's borders and the region as well as to protect Syrians from the oppression and cruelty of terrorists.

The National Council of Syrian Kurds (ENKS) has voiced its support for a new, ethnically-diverse local council in Syria's liberated Afrin district.

Speaking to AA on Friday, ENKS head Saud Molla said: "We have a positive view of the local council founded in Afrin yesterday [Thursday]." Molla also urged displaced Afrin residents to return to their homes, going on to condemn the criminal practices of the YPG terrorist group.

"Until now, almost 100 ENKS members have been abducted by the YPG so-called ‘security forces' and are now being tortured in the darkest prisons of Syria," he said. Molla added that the terrorists had moved the locations of abducted ENKS members in Afrin after Turkey launched its Operation Olive Branch in January.

The U.K.-based Syrian Observatory for Human Rights (SOHR) said in a report released on Apr. 9 that civilians coming back to Afrin were being forced to pay large bribes. Reports also claimed that returning civilians lacked access to food, clean water and medical supplies and that FSA fighters had looted homes and killed civilians.

Footage taken by AA at checkpoints set up in and around Afrin, however, plainly shows FSA fighters and Turkish soldiers freely allowing civilians to pass. Every day, the Turkish army delivers 15,000 loaves of bread and clean water to Afrin's civilian residents.

Muhamed Mustafa, an Afrin resident who is originally from the Jinderes area, says he enters and exits the city center each day. "My brother died in Jinderes but has a house in Afrin. For three days, I've entered and exited Afrin. The control points set up by the Turkish army and the FSA are helping secure the area," he said.

Mohamed Suleiman, another civilian from Jinderes, said he had no problems entering Afrin city. "We came to Afrin today and there was no problem coming or going. Civilians are returning home unmolested. The Turkish military and the FSA are greeting those entering the city," he said.