French troops patrol alongside US soldiers in Manbij 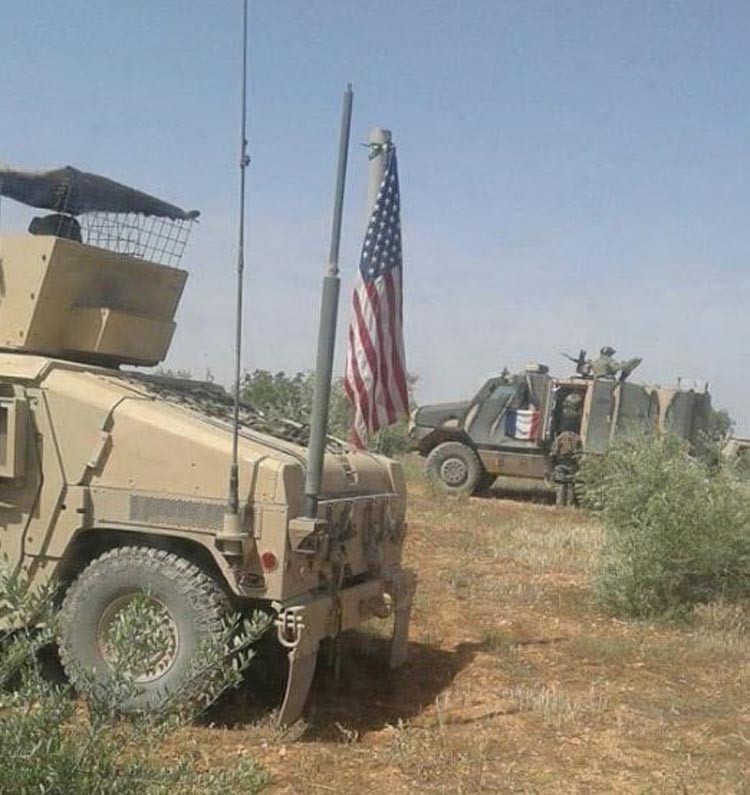 It has been reported that there are approximately 250 French soldiers in regions that are under the control of the SDF, including Kobane, Raqqa and Deir ez-Zor.
by daily sabah
May 02, 2018 12:00 am

French soldiers were photographed in Syria's Manbij, which is under the control of the PKK's Syrian affiliate People's Protection Units (YPG), while patrolling alongside U.S. troops with military vehicles that were carrying French flags, news reports have said.

According to a senior terrorist from the U.S.-backed Syrian Democratic Forces (SDF), a group dominated by the YPG, 50 French soldiers arrived in Manbij a short while ago and are now building a military base in the northern part of the province.

"French soldiers have increased their presence in northern Manbij to prevent the Turkish Military and the Free Syrian Army [FSA] from launching an operation," the senior terrorist was quoted by the Sputnik news service as saying, while adding that although the French soldiers are generally placed on the border, they are active in various parts of the province.

The general commander of the Manbij Military Council, Abu Adeel, also confirmed to Sputnik that French soldiers are patrolling in Manbij alongside U.S. soldiers.

It has been reported that there are approximately 250 French soldiers in regions that are under the control of the SDF in northern Syria, including Kobane, Raqqa and Deir ez-Zor. There is also a center that belongs to French soldiers in Kobane.

Last month, a French presidency statement said French President Emmanuel Macron hopes "a dialogue can be established between the SDF and Turkey with help from France and the international community."

Following the statement, leaders of the terrorist group told Reuters that France promised to send troops to northern Syria's Manbij to support the SDF after Thursday's meeting. In relation to France's attitude toward the YPG, President Recep Tayyip Erdoğan warned the country of abetting terrorism.

Anadolu Agency (AA) reported previously that French soldiers were spotted in at least five YPG-occupied areas. More than 100 French special forces were seen in the towns of Sarrin and Ayn Issa, as well as the strategic Mishtanur Hill and at the U.S. air base in the Harab-Isk village of Kobane.

French and U.S. troops in the region are reportedly carrying out field operations with YPG terrorists.

Manbij was captured from the Daesh in 2016 by SDF forces. Since then, the province has been one of the most hotly debated points of contention between Ankara and Washington. Turkey and the U.S. established working groups to discuss a number of issues, including the stabilization of Manbij and preventing any undesirable clashes.

Ankara's demand for the U.S. to cease arming the YPG and ensure its withdrawal to east of the Euphrates dates back to former President Barack Obama's time in office. The U.S. had promised to meet Ankara's demands, but has not so far, which has strained relations between the two countries.